If a fear of grey skies means you’ve ruled out marrying in our country’s idyllic outdoor spaces, you’re missing a trick

There’s no shortage of practical venues with sprawling grounds on which to stage your champagne reception, no matter the weather. And if it does rain on your parade? There’s always the trusty marquee to shelter in. Still not convinced you’re the outdoor type? Our round-up of the most romantically green-fingered venues will surely convert you: 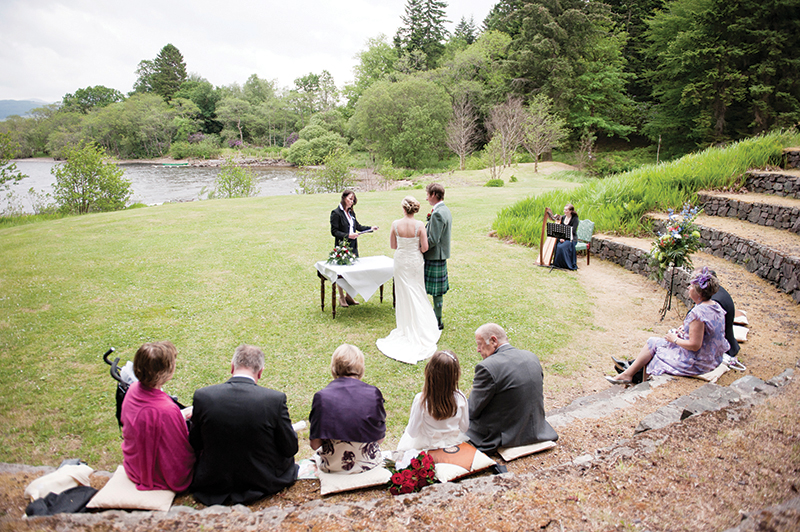 Perched on the banks of Loch Awe, Ardanaiseig’s grounds have ethereal roots. “When Bennie Gray purchased the hotel and its gardens in 1995, he felt there was a real spirit to the place – the sense of ancient history long forgotten,” explains general manager Jamie Aitken. Ceremonies can be held in the atmospheric amphitheatre or in the gardens, among the oaks and conifers in the woodland, or the rhododendrons and azaleas brought back from the Himalayas. 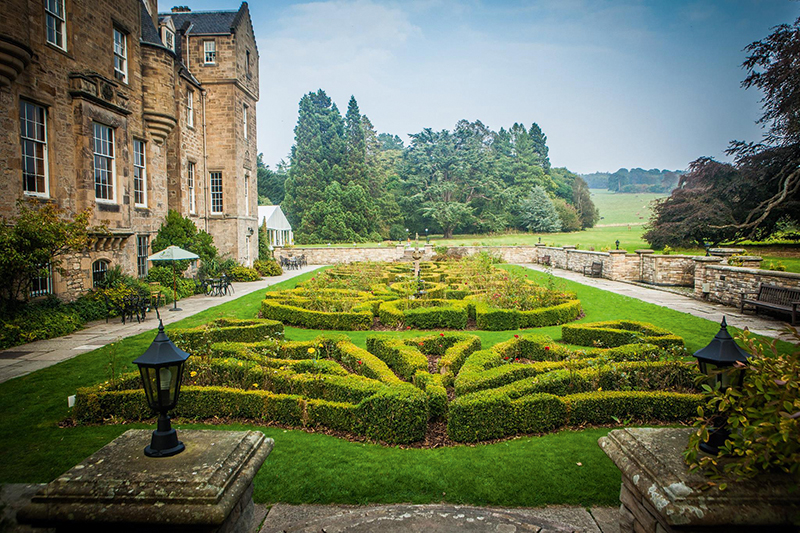 A sunken Italian-style walled garden lies at the heart of Carberry Tower’s 35 acres. It was, fittingly, a wedding gift from the Queen Mother to her sister Lady May in 1910. For the last four years, Carberry has been introducing wider walkways, new outdoor lighting schemes and a larger drinks terrace to improve the grounds for outdoor weddings. The highlight is an on-site, indoor/outdoor chapel with a garden of its own, whose “glass walls can be opened wide, filling it with light, warmth and the scents of the garden,” says the venue’s Marjory Morrow. How divine. 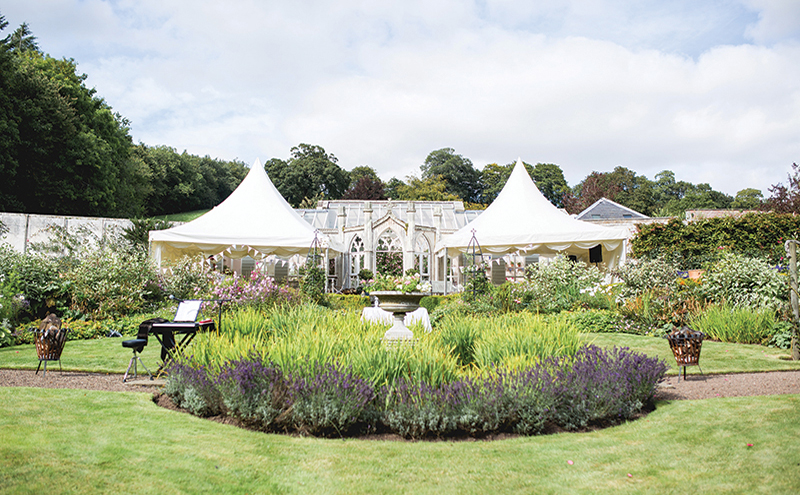 As its name suggests, Cherrytrees revels in its natural beauty, and has done since its current owners first laid eyes on the venue. “It has a very special atmosphere and so we felt that it would be a wonderful place for people to get married,” recalls Amanda Barnes. “The garden is secluded, sheltered and south-facing. In the summer, it’s full of roses and lavender, making it smell fantastic, and because of the abundance of flowers in the garden and conservatory, no formal florals are required.” That’s one thing crossed off the list, then. 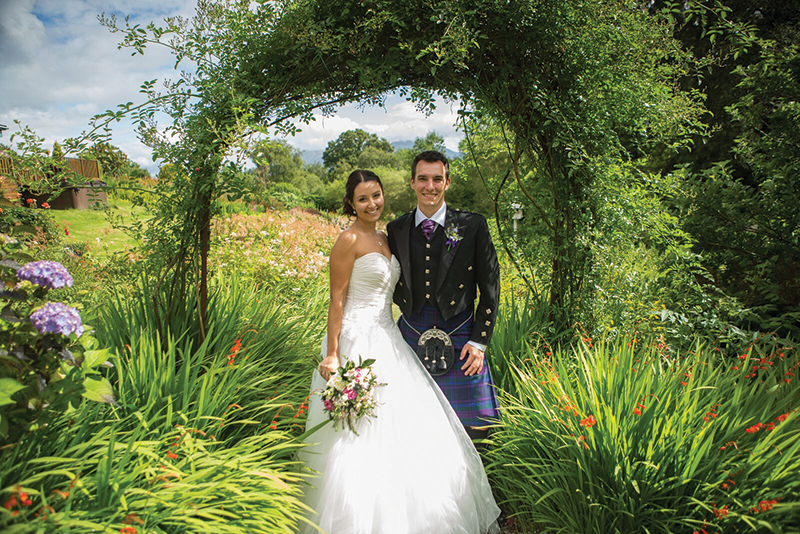 If privacy is a key consideration for you, how about marrying on the very edge of the wilderness? Throw open the curtains at Duisdale House in the morning and you’ll be greeted with views of the Sound of Sleat and the peaks of the Knoydart peninsula in the distance. But don’t worry – you won’t have to fend for yourself to capitalise on unspoilt scenery: Duisdale House has enough of its own, in the form of 35 acres of mature gardens and woodland. Go wild! 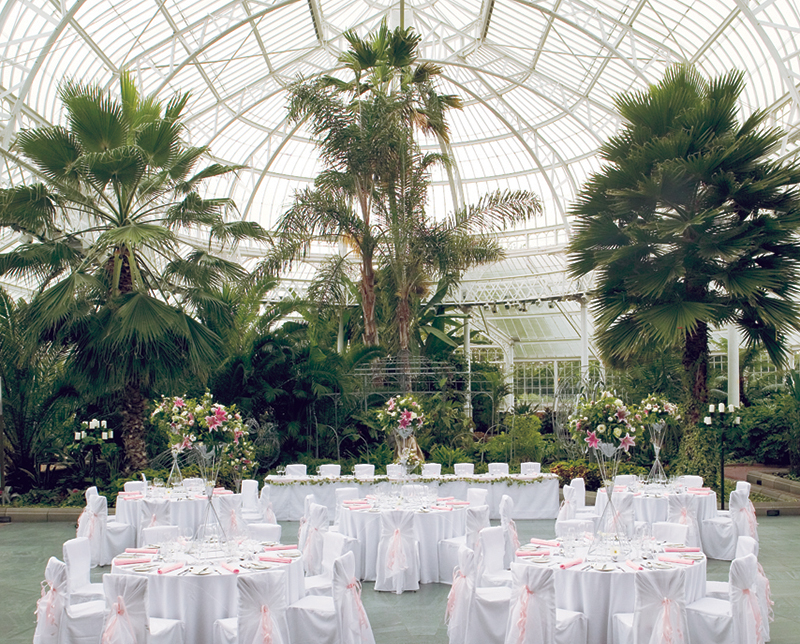 Part of Glasgow’s famous People’s Palace, the Winter Gardens are over 100 years old, and history is part of its make-up. “There are many interesting areas, such as the Japanese ornamental Zen Garden, a 60-yard long Cactus Garden and an extensive Tropical Garden, with some really impressive plants,” explains the Winter Gardens’ Vicky Bond. “There’s also a Desert Garden and a Temperate Garden with formal bedding displays.”

House for an Art Lover, Glasgow 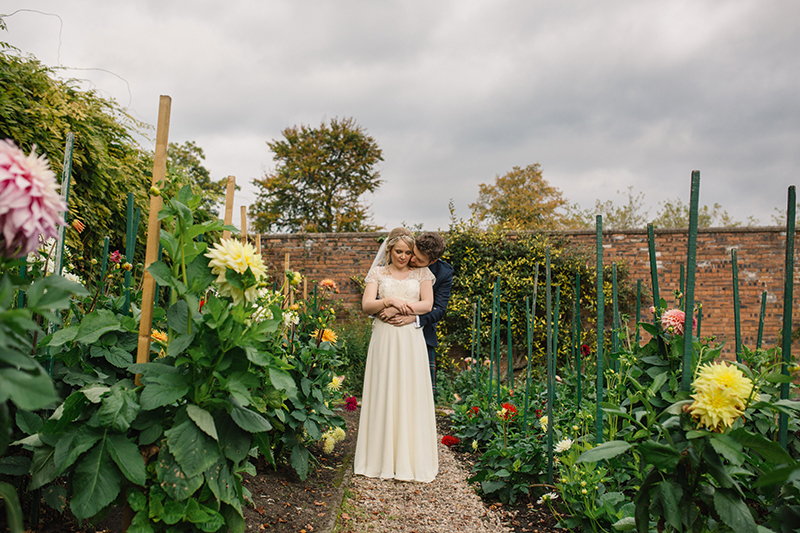 Charles Rennie Mackintosh’s masterpiece needs little introduction, but House for an Art Lover, originally designed for a competition in 1901, has more to offer than iconic architecture. “The House was built on the site of the former Ibroxhill House,” says Lynn Stevenson. “All that remains of that original building today is the Victorian walled garden and the portico, which was saved from destruction and reconstructed in the grounds.” But if you’re also an ‘art lover’, there’s more. “The grounds of the House feature a variety of unique sculptures,” explains Lynn. 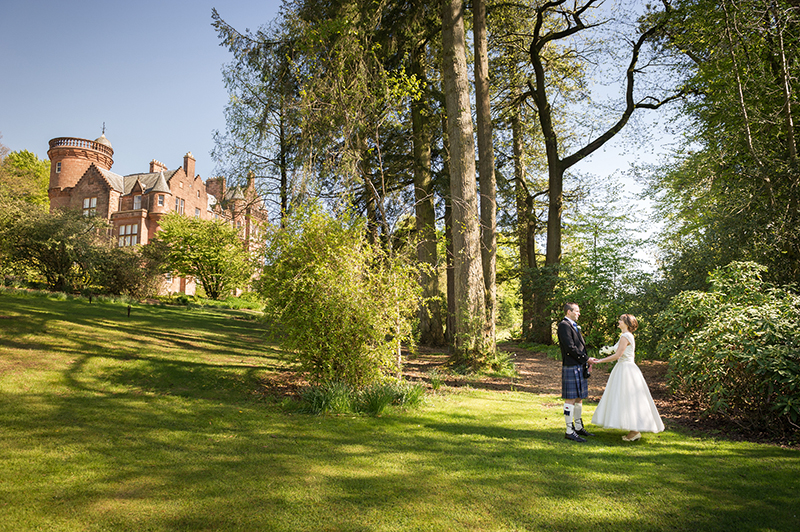 The National Trust for Scotland’s Threave Estate is an eden of an outdoor wedding setting. A rose garden and orchard take care of the floral photographs, while the lawns provide a base for receptions and ceremonies. “Wedding ceremonies can take place anywhere in the garden, including the patio and secret gardens,” says the Trust’s Rebecca Sloan. “Alternatively, marquees can be erected in the garden.” 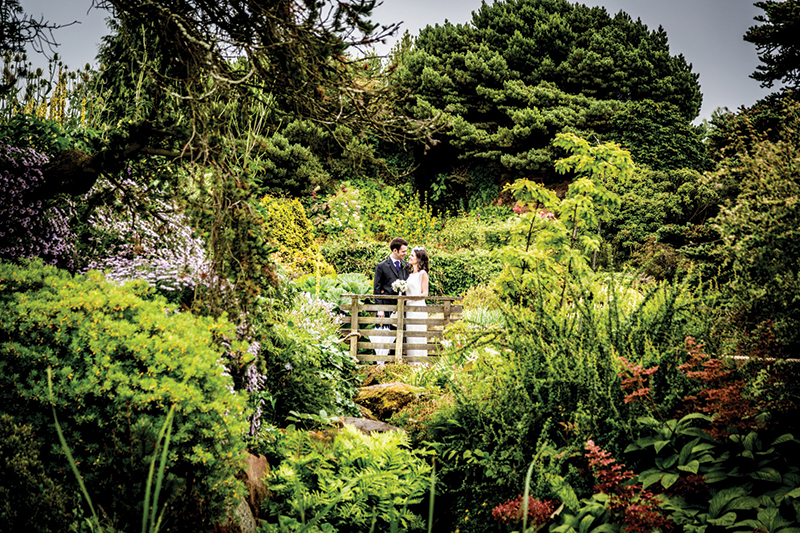 Given its scale now, it’s difficult to believe the Royal Botanic Garden was once “no bigger than a tennis court”, says the venue’s wedding co-ordinator Erin Burden. It has also changed location several times, before the final move to Inverleith in 1820. “Today, it comprises 70 acres and hosts an average of 80 weddings a year.” Its appeal is clear: a permanent marquee for drinks receptions, while the outdoor ceremony space is sheltered by Californian Redwood trees, “giving a cathedral-like feel as they stretch into the sky,” describes Erin. 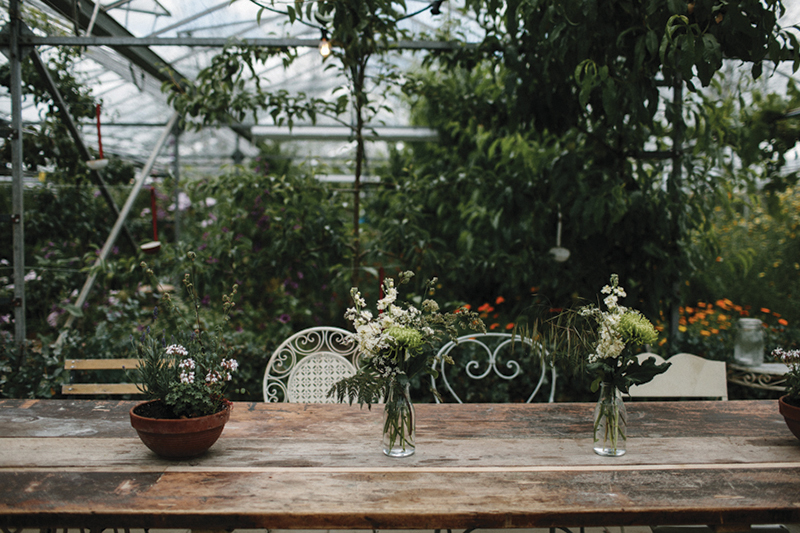 Formerly a derelict glasshouse, the Secret Herb Garden was brought back from the brink by owners Hamish and Liberty Martin two years ago. The glasshouse can seat 80 guests for dinner and ceremonies can take place in the yurt or among over 650 varieties of herb, complete with edible flower posies. What’s next for the venue? Watch this space for a soon-to-be converted barn area. 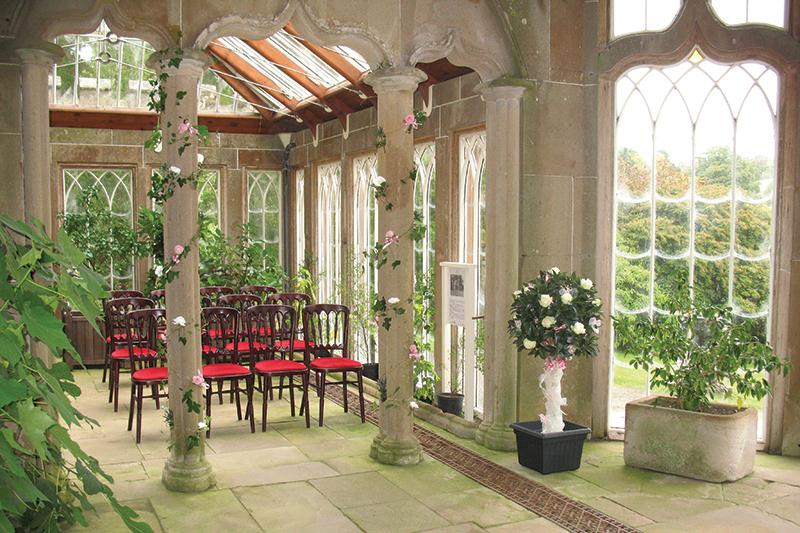 Combining a country park and a clifftop, Culzean Castle’s grounds are spectacular. Ceremonies can be staged in the Camellia House, framed by fairytale-worthy windows bursting with greenery, while receptions can be held in a marquee on the lawn, with pictures taken in the walled garden.

The Lodge on Loch Goil, Argyll 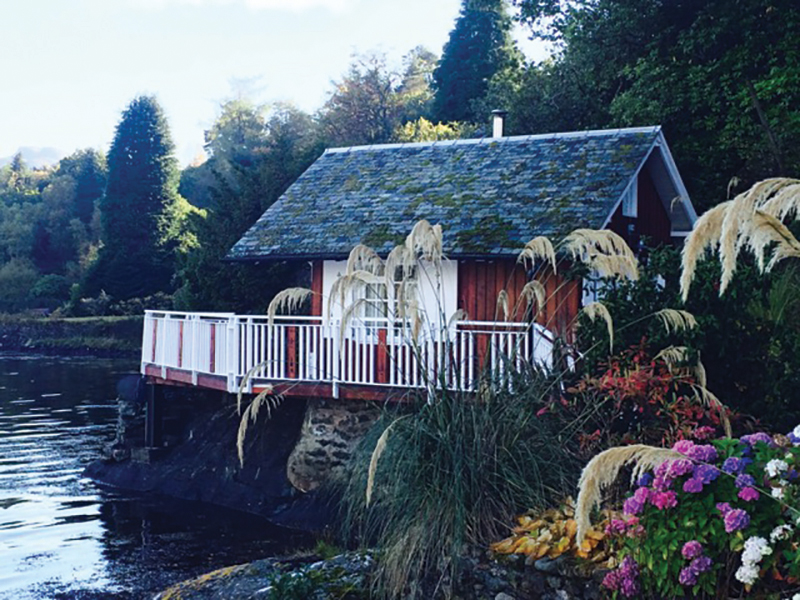 Though rugged gardens peppered with wildflowers and shrubbery sound charming, there’s a fine line between gardens that are romantically rebellious and those that are just plain unruly. The Lodge on Loch Goil sought to find the right balance. “When the house was bought in 1996, the grounds and gardens were very overgrown,” recalls the venue’s Iain Hopkins. “Now, though, you can marry under our large copper beach tree by the loch. The colours are incredible.” There are also vibrant rhododendrons and a heady combination of heather, lavender and thistles.

This Georgian mansion in Angus is a masterpiece – and its grounds are pretty special too. House of Dun has 300 hectares of Victorian walled gardens, parkland and woodland, looking out to the Montrose Basin’s nature reserve. Have your photographer pose you beneath the Wellingtonia trees and arm yourself with a marquee – this is a year-round alfresco wedding winner.

Transforming a barn into a warm and romantic wedding venue

Styled shoot: all things bright and beautiful in a Victorian glasshouse at Culzean Castle