Want to inject some royal-wedding magic into the big day? Enjoy your own William and Kate moment courtesy of the venues we’ve found in Scotland with a beaut balcony

Royal College of Physicians Of Edinburgh

The Royal College of Physicians of Edinburgh’s New Library was designed to resemble a woodland clearing, with the balcony’s handrail intended to evoke images of tree trunks and leaves. Regardless of whether you host your ceremony, meal or reception in this space, you’ll want to ensure you get papped enjoying a sweet smooch here. Looks like these two have the right idea.

Carrick might be one of the hottest new venues out west, but the modern design of its lodge is nothing short of timeless. We’re impressed with the way that this bride has managed to incorporate the sleek balcony into her aisle walk – now that’s what we call strolling into married life in style. Kudos.

House for an Art Lover

They call Glasgow the ‘dear green place’, an accolade that the balcony at southside venue House for an Art Lover is keen to live up to: it looks out onto picturesque, leafy Bellahouston Park. Fabulous photo ops await.

Recently renovated, Bearsden’s Kilmardinny House is a favourite with cool couples the country over. That might be in large part thanks to its ornate light well and balustrade, a stunning feature that will shine in your w-day album. This one’s going up in the world.

Escape the chaos of the day by climbing up to the Trades Hall’s balcony and raising a glass to the start of married life as you gaze down at the streets of Glasgow’s Merchant City. Just make sure your photographer’s perfectly placed to capture the moment – AKA a ‘plandid’ for those not in the know.

This charmer is also home to the legendary Three Sisters Bake, so why not take full advantage of the cafe and utilise the balcony as a break-out space post-dinner? Fabulous views of the surrounding countryside are guaranteed at Killearn Village Hall.

This mammoth leisure resort might seem intimidating at first (it sleeps a mighty 260), but it’s the small things that really make the Peebles Hydro sing. For example, for a bride in a tower crown and boho-chic dress, this sweet green pavilion wouldn’t look out of place at a rustic retreat.

The Merchants’ Hall and Riddle’s Court

As much as we love a rip-roaring ceilidh, we’d recommend taking a breather from the action on the dancefloor at The Merchants’ Hall (left) and retiring to this pretty platform to watch from above at this Edinburgh stalwart. You’ll get a whole new perspective on the celebrations.

The unusual external stair on this Edinburgh hidden gem is a replica of the original, but that doesn’t make it any less mesmerising. Drape yourself over the vintage balcony at Riddle’s Court (right) and you’ll be a blushing bride to rival Juliet herself – with your own Romeo down below, it’ll make a fantastic photo.

Tudor or not Tudor? If it’s beaut Boclair we’re talking about then we’ll happily go with the former. The good vibes start with the imposing red-sandstone exterior, from which you can perch and watch the whole of Bearsden go by. We’ll race you to say ‘I do’. 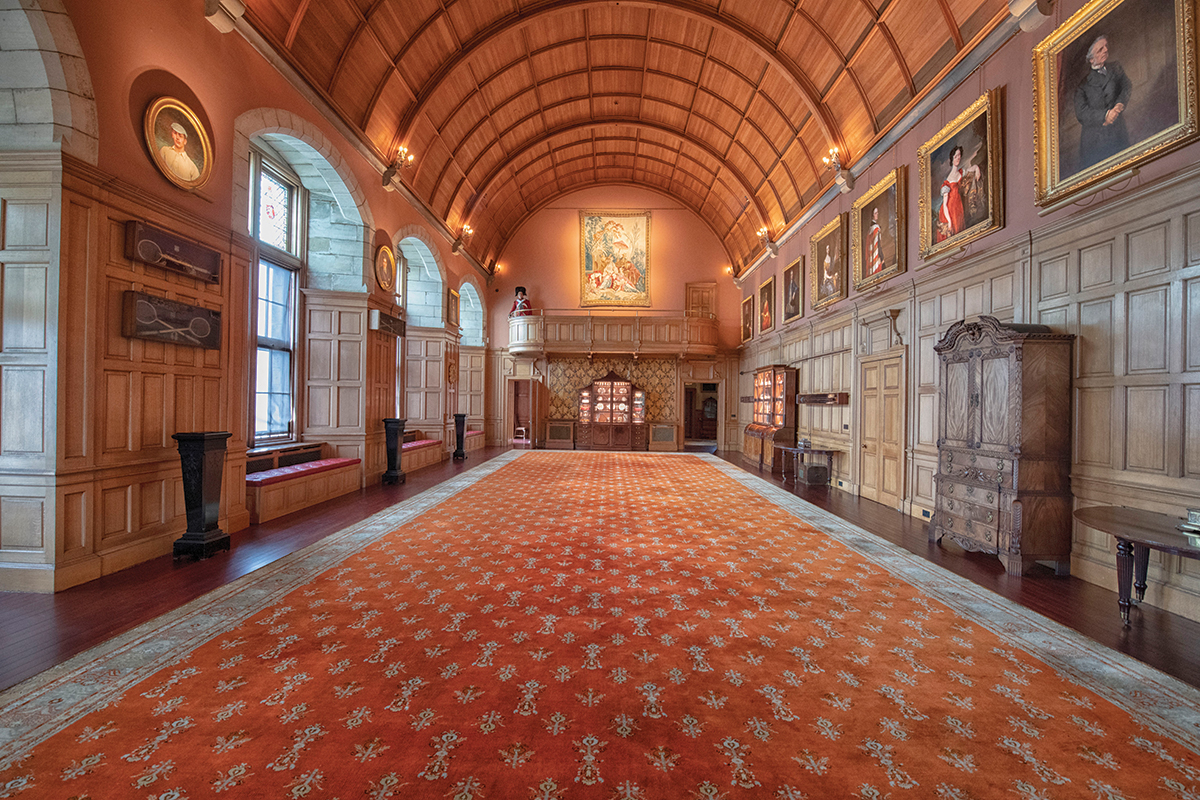 Hankering after a castle wedding? Go all out with the sheer opulence of Barnbougle. It has six libraries, access to private beaches and serves up scrumptious food from exclusive caterer Honeycomb & Co, all from its location on the outskirts of Edinburgh. The jewel in the castle’s (rather dazzling) crown, however, has to be the barrel-vaulted dining room, where you can announce a toast from the Minstrels’ Gallery. Now tuck in.

Before its current incarnation as Edinburgh’s premier tapestry studio, this artsy venue was a Victorian bath-house, and Dovecot Studio’s elegant viewing balcony is testament to its evolution. It makes a wonderfully spacious spot from which to look down on the celebrations below.

Glasgow’s party animals will be well acquainted with this iconic spot in the city centre, but they might not have considered The Corinthian as an option for their big day. The stunning Flying Scotsman room can host up to 190 for a knees-up, with the vaulted auditorium providing ample space for dinner and dancing. The pièce de résistance, however, is the mezzanine, complete with its own bar – because climbing stairs is thirsty work.

Ingliston (left) was already a lust-worthy venue to begin with (1920s decor and sumptuous suites, with cracking cuisine to boot), but then they just had to take it to the next level by giving us this platform with views over the Kilpatrick hills. We’ll be here all week.

The gallery at west-end institution Òran Mór (right) is usually hired in conjunction with the auditorium for big bashes, but more intimate weddings can make use of this space for ceremonies if they so wish. You can find us camping out here to take in Alasdair Gray’s awe-inspiring ceiling murals. 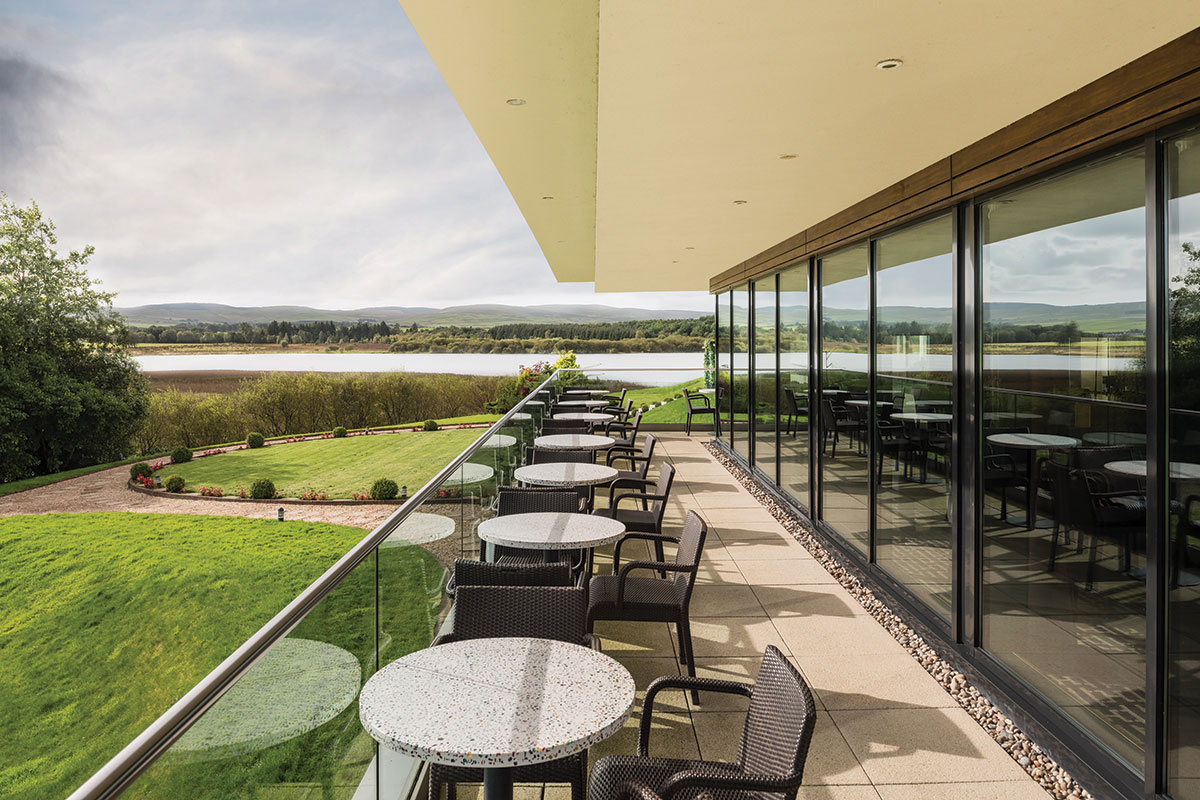 Think you know hotel weddings? It’s time to raise your expectations with the glass viewing platform at this Ayrshire venue. Soak up the Lochside’s breathtaking vistas with loved ones during your drinks reception, or watch the sun set on the best day of your life later in the evening.

Lanico lands at The Finer Detail

The best wedding barns, farms, byres and stables in Scotland 2020

12 venues in Scotland perfect for a winter wedding

We have NOT needed a reason to drink bubbles and t

In the immortal words of Ross Geller, sometimes, y

How drop-dead gorgeous is the columned façade at

Start the week as you mean to go on: by getting or

The mix 'n' match tones of our #WeddingoftheWeek b

It almost seems unfair to dress your flowergirls t

You'd be barking mad not to head to our website an

Allow us to introduce you to @alycejayne_bridal, a

We're chatting about all things skin-related over

We're loving a good pink colour combo at the momen

@dune_london has sorted your something blue (and p

If you chose to get married in a former Scottish c

Did you ever get round to wedding crafting with yo

Get a load of that rock 💎😍 congratulations t

“Love is the flower you’ve got to let grow.”

The first official photo of Princess Beatrice and

"My dress was the biggest bargain. By some incredi

Friends are like stars, you don't need to see them