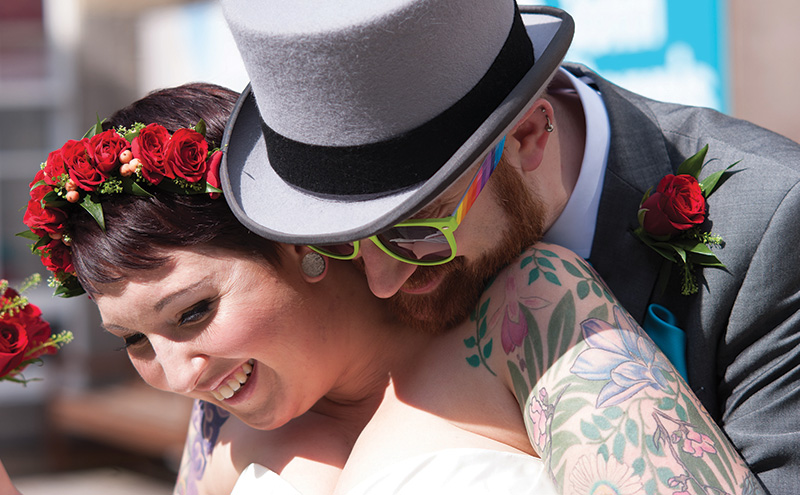 In the depths of a “terrible nightclub”, teenage Andrew Donaldson (Don) caught his first glimpse of wife-to-be Alice Ross. “She sparkled in her red and black dress, uncaring about anything other than the music,” he gushes. “I knew I wanted her in my life.” Little did Alice know that some ten years later, she’d be standing on a bridge in Bruges, agreeing to marry Don.
The Surgeon’s Hall in Edinburgh was the setting for the big day, just opposite the Edinburgh University campus where Alice had studied. “We knew we wanted to have the wedding in Edinburgh,” explains Alice.

“It’s beautiful and we’ve had so many amazing times together in the city.” Humanist celebrant Lara Celini paid a warm and funny tribute to the pair in the Fellows’ Library before the wedding moved upstairs to the Playfair Hall.
Other details were more unusual. “Our cat Blinky was unable to attend our wedding,” giggles Alice. “But my mum created a wonderful stuffed toy version which served as the ring bearer.” A tiered cake was also replaced with a tower of Greggs’ doughnuts, while Alice’s dress was bought, and returned back, to the British Red Cross shop in Stockbridge.

A pretty pastel celebration at The Parsonage at Dunmore Park