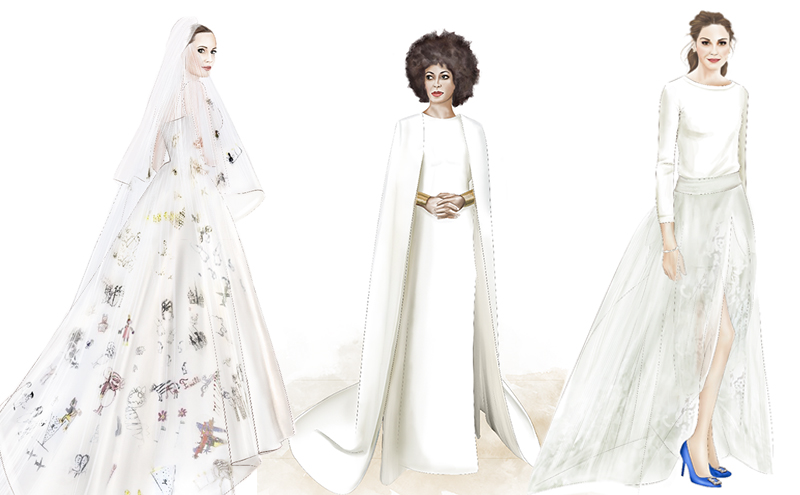 It’s easy to romanticise the past, especially when it comes to bridal fashion. Would you pick a dress from the current decade when discussing the most influential and acclaimed wedding dresses? You’re probably more likely to think of Princess Diana’s eighties luxuriance or Bianca Jagger’s achingly hip two-piece. Newsflash: we’re churning out more future classics than ever.

Online shopping curator Stylight has commissioned a series of eight illustrations of the decade’s most iconic gowns, and it’s a trip down (short-term) memory lane that we were more than happy to join them on.

What a time to be a bride!

Kate Moss tapped John Galliano to dress her for her 2011 wedding, and her laid-back luxe look brought boho dressing to the fore for brides, where it's stayed ever since.

After much speculation, Kim Kardashian West asked BFF Riccardo Tisci at Givenchy to design her gown.

Fashion fans had high hopes for Olivia Palermo's bridal ensemble, and they were not disappointed! The relaxed cashmere jumper, teamed with white shorts and a tulle skirt overlay came courtesy of Carolina Herrera.

One dress to rule them all! Sarah Burton at Alexander McQueen was given the enviable task of dressing our future queen as she bode farewell to being Kate Middleton and was crowned Catherine, Duchess of Cambridge.

Some brides have two dresses, Poppy Delevingne had two weddings. Her Chanel gown for her London nupitals was classic, but the Emilio Pucci dress she wore at the Marrakesh bash the week after is much more awe-inspiring.

All eyes were on the woman who finally tamed George Clooney, so Amal Alamuddin made sure she did not disappoint in her Oscar de la Renta off-shoulder French lace frock.
Previous Article