With so much riding on the outcome of your wedding-day photos, it makes sense to organise a preparatory session – and to celebrate your new married status with a fun post-party shoot

Just weeks after getting married, Nicola Loggie steps back into her beautiful floor-length gown and heads off to the beach. Ivory dress trailing in the wet sand, she runs towards the waves and, with not a care in the world, splashes into the chilly water, much to the astonishment of onlookers on the promenade.
With her two bridesmaids by her side – and no sign of new husband Stuart – Nicola is starring in her very own ‘trash the dress’ post-wedding shoot. She is one of many Scottish brides who are following a global trend that sees brides deliberately wrecking their wedding gowns – with the results captured in amazing photos. This quirky type of shoot is something more and more photographers are offering in their wedding packages.
Pre-shoots are also on the rise, offering couples a ‘practice run’ in a relaxed and comfortable environment before the big day arrives. They’re a great way for the photographer get better acquainted with the bride and groom, and vice versa.
Russell Hogg, who runs Aboyne Photographics with his wife Laura, has seen a huge increase in the number of pre-wedding shoot requests he’s had. “These sessions are becoming more and more popular here in Scotland after exposure from the likes of Tumblr and Pinterest and Californian wedding blogs. Laura and I love to do them as it’s a great way to get to know the bride and groom better. When it comes to the wedding day, this established rapport helps us create beautiful, natural images far more easily.
“Our clients make good use of their pre-wedding photos too, to announce their engagement, or as invites, thank-you cards, table names, guest books and bunting.”
Being in front of the camera can be an uncomfortable place, as most photographers well understand, so they offer pre-wedding shoots to eradicate this awkwardness.

Alistair Brown offers a complimentary pre-shoot to couples who book their wedding package with Alistair Brown Photography. The Ayrshire snapper agrees that these sessions enhance the relationship between him and his clients: “We both have that time before the wedding to find out a little bit more about each other, which builds trust and confidence and helps me as much as it helps them.
“I usually see a huge transformation between the start of a shoot and half an hour into it. The couple start to open up and show their affection for each other; and once that stage is reached, the wedding day becomes a lot easier. So, for me, a pre-wedding shoot is time well spent.”
Fellow photographer Chantal Lachance-Gibson likes pre-wedding shoots because they allow her to identify any potential issues at an early stage. Common concerns are: the bride hates her profile or the groom want to hide his bald spot or the couple don’t know how to smile or stand properly. But with a bit of coaching from the photographer, the results speak for themselves.
“Being comfortable with your photogra­pher eases any worries on the big day itself,” she says. “Pre-shoots are a great way to let me to find out what works and what doesn’t, so I can take the best pictures possible when it really matters.
“I personally enjoy pre- and post-wedding shoots because it’s a fantastic chance to get creative. And at the end, the couple have another gorgeous set of photos to keep.”
One of Paul Brown’s clients organised a secret pre-wedding shoot for herself as a way of surprising her fiancé before they tied the knot. “The bride had a boudoir-style shoot done in the studio so she could present the groom with a small personal album on the eve of their wedding,” explains Paul, of PB Photography.
Sometimes it’s possible for the couple to stage their pre-wedding shoot in the venue that’s actually going to host their reception. The benefits to the photographer are enormous as it gives them the opportunity to experiment with a variety of locations and poses in and around the grounds.
A good photographer will offer tips and suggestions, which should boost your confidence and prepare you for the actual day. Then, when it finally arrives, both the bride and groom will be more relaxed, thanks to having had the trial run.
Photographer Becky Henderson, who launched EnaMay Photography last year, says: “At the start, most couples tell me they don’t like getting their photo taken, but by the end they feel so much more at ease. Because you’ve been in front of the camera once before and you’ve seen how good the results are, the photos become one less thing to worry about on your wedding day.”
You may have enjoyed a pre-wedding shoot, but most photographers will tell you that while it does bring many benefits, it can’t fully prepare you for photographs on the day itself. Becky Henderson cites two reasons for this: “One is the added pressure that comes from the fact that it is your actual wedding day! Secondly, all photography is weather-permitting. I prefer to shoot outdoors where there is natural light, so if there’s a heavy downpour on the day and we don’t manage to get the shots we want, I offer to meet up with the couple again for a post-wedding shoot. Last week I photographed a wedding on Iona and the heavens opened, so we will be organising a post-wedding shoot on a brighter day.”
When booking a pre-shoot, always check when you’ll receive your proofs/prints. Hopefully they will be ready before the wedding itself so you can identify (and address) any concerns you may have and, as Russell Hogg suggested, you can use them on wedding accessories.
A signing frame is another way of displaying your favourite pre-wedding shoot image. This very popular option is a guest-book alternative, where friends and family sign the frame with congratulatory messages around a beautiful photograph of the couple.

After the wedding itself, it’s natural to feel a little flat as all the preparations have been done and the day that you have been building up to for so long is over. Some newlyweds are discovering that one way of getting rid of the wedding blues is a to arrange a post-wedding photo shoot. Whether it’s in a studio, your own home or the great outdoors, an ‘after’ shoot is a fun way of celebrating your new status as Mr and Mrs – or, of course, to trash the dress!
Some couples opt for a post-wedding shoot the day after their celebrations at a different location, with the bride in her dress and groom in his kilt.
For others, it is a chance to do something ‘outside the box’ a few weeks into their new marriage. Russell Hogg of Aboyne Photographics says this can be particularly appealing for more adventurous brides: “Throwing caution to the wind – and yourself in the lake! – can make for some truly stunning photos that stand apart from the rest. We have done some fairly standard pre- and post-wedding shoots, with the occasional exception of a bride and groom standing in the middle of the road and pretending to jump off a pier! We also photographed a couple perched at the edge of a harbour wall surrounded by lobster creels and, earlier this year did a shoot in a derelict barn!”
In other words, have fun and let your imagination run wild, and you’ll end up with some spectacular images.
[hr]

SHOOTING FROM THE HIP 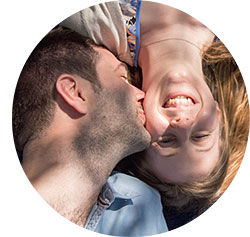 Alison says she was “apprehensive” about being photographed at her Iona wedding in July, so a few months before asked Becky Henderson of EnaMay Photography for a pre-wedding shoot. “I saw it as a way for us to get more comfortable with Becky. Plus, Fraser and I didn’t have many pictures of ourselves together.
“I was nervous on the day of our shoot – I don’t like getting my picture taken! Fraser is much more confident than me. But during the one-hour shoot Becky photographed us from a distance as we walked through the park hand-in-hand. Then, as we felt more comfortable, she did some close-ups. We loved them!
“I would urge brides who are apprehensive about their wedding photos to have a pre-wedding shoot. Becky was so friendly and pro­fessional, and now I am much more confident in front of a camera.”
www.enamayphotography.co.uk 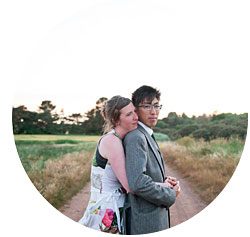 Time got the better of Mary and Robert on their special day in July, so they staged a post-wedding shoot the following day.
“We also wanted some lovely photos of us together, so we had a post-wedding shoot on the Sunday morning,” explains Mary. “Our venue, in East Lothian, was amazing, right near the beach and farmland, so we wanted to take advantage of that.
“It was a relaxed wedding day, but this shoot was more about us having a fun time than looking prim and proper in our wedding attire so we wore our casual clothes. It was also quite spontaneous – we didn’t really plan it and was really flexible. Our friends and family looked on as we were posing.
“It was fantastic and kept the wedding day feeling going – we had a whole weekend of it. Plus, it was nice to have a few moments away on our own.”
www.mackphotography.co.uk

LOUISE & MALCOLM MACASKILL
Louise was dreading one thing about her forthcoming wedding – the fact that she had to be photographed all day long! 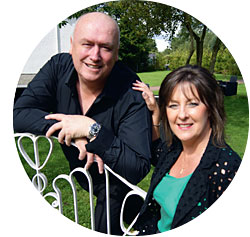 To help her cope, she arranged a pre-wedding shoot, and when she wed Malcolm she even surprised herself. “Up until the day of our pre-wedding shoot, I hated getting my photo taken – I would always hide at the back,” she recalls. “But our photographer gave me so much confidence that I was far more relaxed on the day. She told me how to stand and how to pose. If we hadn’t done the pre-shoot, I’d have been saying, ‘I hate this, hurry up!’ on the day, but I was surprised by how much I actually enjoyed having my photo taken.
“I think a pre-wedding shoot is absolutely vital – it makes you feel comfortable, not just with your photographer, but with yourself. It also allowed us to get acquainted with our venue, and the endless possibilities for photographs outside and inside.”

NICOLA LOGGIE
Just weeks after marrying, Nicola headed to Irvine beach in Ayrshire to trash her dress in style. “I’m not traditional, 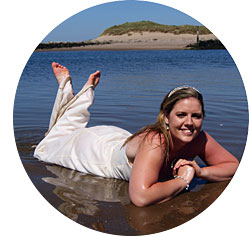 my wedding wasn’t traditional and this post-wedding shoot was different too. People keep their dresses, and often make them into christening gowns, but that wasn’t me. I just wanted a bit of fun,” she says. “On the day of the Trash the Dress shoot I was so nervous. I was hoping nobody would be on the beach – but it was mobbed! Then an ice-cream van pulled up and a queue began to form! I just thought, ‘Who cares? Let’s do it!’ The water was freezing, but it was great!
“I have since put my dress in the washing machine. But the marks from my wedding day and the seaweed stains from the ‘dress trash’ have not come out. Now my dress tells such an amazing story.
“I have no regrets. I’ve got the memory of the day and the photos from the shoot are so good, so I could never think ‘why did I do that?’”
www.waverleyphotography.co.uk