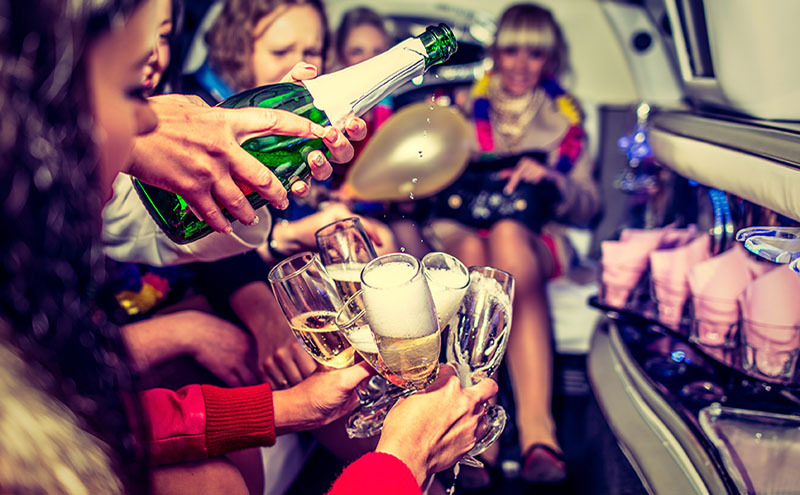 What is it about being on a hen or stag do that makes us feel socially invisible/invincible? We’re never more conspicuous than when decked out in a sash and willy tiara, or dressed as a Smurf handcuffed to a dwarf. Despite this, we’re in our element: chanting, spewing, pestering members of the emergency services (wait, that stripper was a real policeman?), and don’t get me started on the blatant disregard for road safety rules.

This might seem like #topbanter to those involved, but how does not making everyone in earshot hate you sound? Here are 10 important things you’re likely to encounter on your hen or stag party and, more importantly, how to keep everyone involved sweet:

You booked the minibus for 10am? Can you guess what time your driver wants to leave? I’ll give you a clue: it’s not whenever Wee Davie’s mum drops him off because he slept in. And it’s not, “Just as soon as my cousins come back from the off-licence”. Your driver might have other bookings, so taking 40 minutes to assemble and embark will have a knock-on effect. Don’t forget to ask in advance if you can drink on board, as turning up laden with cans when there’s no food or drink allowed will cause resentment on both sides. FYI, it’s illegal to drink alcohol on trains in Scotland between 9pm and 10am, while getting drunk and lairy on a flight can lead to a quick turnaround in handcuffs.

Boo! But it is worth mentioning. Shaving off the groom’s eyebrows a month before the wedding is one way to get yourself uninvited. Uploading photos of the bride eating a banana out of a Chippendale’s boxers isn’t going to make you Little Miss Popular with her soon-to-be husband. What happens on the last night of freedom should most definitely stay there.

Just because the bar offers hen packages doesn’t mean they want rude cupcakes trampled over the carpet, three hours of shrieking Britney songs and spew in decorative plant pots. Consider other diners/drinkers who would prefer not to be showered in the contents of the penis piñata. And always tip the staff well – they don’t get paid enough to deal with you.

Break down your day’s activities into optional sections. This will endear you to your cash-strapped/reluctant pals and let them know they can participate in as much or as little as they like. Most people will have such bad FOMO (fear of missing out) that they’ll come along all day/weekend – but they’ll really appreciate having the choice.

You might make Monica from Friends look relaxed when it comes to planning, but that doesn’t entitle you to put pressure on your bridesmaids or best man when they’re organising the party. Throwing a hissy fit because you’ve ended up at your usual watering holes or because they couldn’t reunite East 17 will make you look bad, not them.

Don’t treat the event coordinator at your chosen activity like a babysitter. If you’ve gone for something that could result in injury, such as ice wall climbing, quad biking or watersports, then save the messing around for later. Pay attention to safety instructions, wear all protective clothing provided and don’t be stupid. Shooting the best man with an arrow doesn’t make you Robin Hood – it makes you a prat.

I’ve been on hen parties with the mums, grans and aunties, and also without. Family affair wins hands down every time. When else would you get the chance to have all your favourite gals or guys together? Watching it all unfold, you’ll be amazed at how everyone gels. Who knew your uncle liked Jägerbombs? If your family is a little bit more reserved and you know at least one mate will be streaking by 8pm, then having one part of the day that they can come along to, such as a meal or a round of golf, is a nice compromise.

Having fun at a hen party is not easy when you’re knocked up (I’ve asked around). That’s not to say a pregnant woman can’t enjoy herself on a night out, but it’s the sheer scale of the cocktail-induced chaos of a hen do that leaves many mums-to-be feeling a bit like a bystander. Equally, don’t make a massive fuss over them, just quietly consider their enjoyment when planning activities. Little touches like not having them stand for hours, ensuring alcohol-free cocktails are on the menu, and not sitting them next to your workmate who pre-drinks for the pre-drinks and is normally incoherent by dessert will all make their night one to remember (even if you don’t recall anything after 11pm).

Many holiday letting companies don’t accept bookings if it’s for a hen or stag party. As last flings increasingly expand from a night out to a full-on weekend, a growing number of accommodation owners are wary of handing the keys over. That’s understandable, since most apartments or houses that have the capacity to sleep 10+ people will be worth an eye-watering amount. And we’re not talking about a few broken glasses here. I’ve heard of one superhero stag group that had to roll a sleeping Hulk to bed after he passed out in the living room, leaving a body-paint silhouette on the wall.

It’s easy for the organisers to get carried away when sorting out your soirée, more so if you’re one of the first in your social circle to get married. If you really don’t fancy a boozy pub crawl then find a tactful way to steer things into a more ‘you’ direction. On the other hand, doing something because it seems like ‘the done thing’ is daft. If you wouldn’t ordinarily enjoy decorating cupcakes, what makes you think you’ll have fun doing it as a hen?