Four newlywed couples tell us the story of their wedding bands 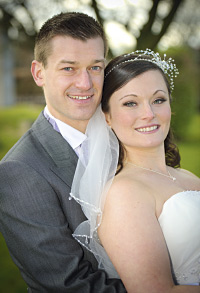 Our day: The couple tied the knot on 2nd April 2011 at Garfield House Hotel in Stepps.
Ring details: Cara’s platinum wedding band is set with one off-centre row of diamonds, while Phil has a wider platinum band etched to a matte effect. Both are from Rooney Goldsmiths where Phil also had Cara’s engagement ring made.
In my dreams: Cara initially wanted a plain wedding ring, as she works in a hospital, while Phil was open to ideas. “I wasn’t really sure of what I wanted, so was happy to listen to suggestions before choosing a style,” he says.
In reality: “I originally thought I would pick a plain platinum band to match my engagement ring,” says Cara. “But as the engagement ring is quite a simple style, the wedding band looked better with a band with stones set in it. They also made me a plain silver band to wear to work too.” Phil says: “My ring needed to be resized and I had originally asked for a polished ring but then decided I wanted a matte finish – which Michael at Rooney Goldsmiths did there and then!”
Words of wisdom: “Think about getting your rings made, rather than choosing pre-designed rings or something off the shelf,” recommends Phil. “It makes the rings more personal and it’s a great way to spend a day.”

The jewellery shop: “Michael and Lynne at Rooney Goldsmiths were so easy to approach and were able to offer loads of variations, from traditionally styled rings to more fashionable ones, plus the opportunity to design our own. I was so impressed that I recommended Rooney’s to my brother, who has since had an engagement ring designed for his fiancée. He drove all the way up from Hull to get it!” 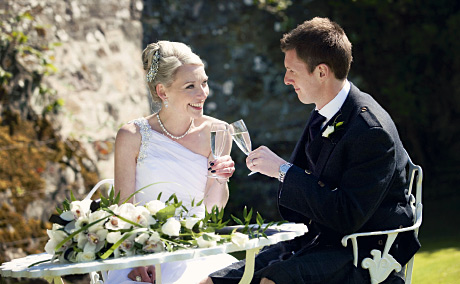 Our day: Sarah and Iain married on 2nd June 2012 at Murrayshall House Hotel in Scone, Perth.
Ring details: Sarah’s wedding ring is an 18ct white gold band with diamonds set on the upper outer edge, while Iain’s is a classic court contour ring in palladium. They chose Ian Mundie & Son, where Iain’s father and uncle have gone for many years.
“It made sense to carry on the family tradition!” smiles Sarah.
In my dreams: “I wanted a simple band with diamonds round it as my engagement ring is a simple solitaire. And it had to be white gold to match my engagement ring. Iain was less fussy – he wanted something plain and not too fashionable,” says Sarah.
In reality: The couple’s finished rings were very similar to the original idea that they’d had months before. “My ring is a small band with diamonds halfway around and on the side of the band, so I can see the diamonds when I’m looking at it too. (Gareth, the jeweller, decided I had to be able to see the diamonds even when I’m showing it off!) Iain has ended up with a plain palladium band that is slightly curved,” says Sarah.
Words of wisdom: “Keep an open mind when looking at rings, and listen to your jeweller – they know what they’re talking about!” advises Sarah.

The jewellery shop: “Our shopping experience was great! Gareth at Ian Mundie & Son was so helpful and listened to our requests and budget. He knew just by listening what kind of things would suit and the first two rings he brought out were the ones we ended up buying!” 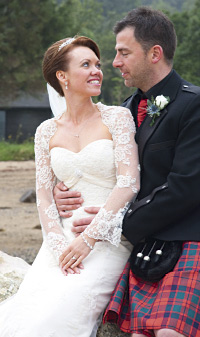 Our day: Claire and David said their ‘I dos’ on 15th September 2012 at The Big Wooden House on Arran.
Ring details: Sourced from John Macintyre & Son, Claire’s wedding ring is a platinum band with eight small embedded diamonds and David’s ring is a palladium court-style band.
In my dreams: “I wanted platinum to match my engagement ring. I would have loved a band fully encrusted with diamonds but that was a little out of our price range. David was open to options but wanted something plain,” says Claire.
In reality: “I originally thought all I would be able to afford would be a simple platinum band, but after advice from Macintyre’s I was able to add that little bit of sparkle,” Claire explains. “We couldn’t afford platinum for David, and because he works with his hands, we wanted something durable. Macintyre’s gave us some good advice and we opted for palladium, which looks identical to platinum but costs a fraction of the price.”
Words of wisdom: “Buy the best you can afford. Don’t be afraid to state what your budget is and to stick to it,” recommends Claire.

The jewellery shop: “John Macintyre & Son’s is a really friendly and relaxing environment with down-to-earth staff. They made us feel at ease and provided a variety of options in different price brackets. They also pulled out all the stops to get our rings made on time, considering we had only given ourselves a couple of weeks.“ 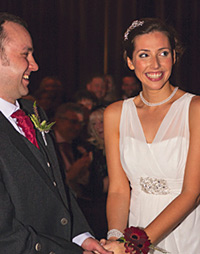 Our day: The couple got hitched on 29th October 2012 at Edinburgh’s Ghillie Dhu.
Ring details: Stuart is a ring-maker at James Brown & Partners. He designed and made his own flat court ring with satin-finished walls, as well as Alex’s engagement ring and court-shaped wedding band with two rows of bead-set diamonds.
In my dreams: “I didn’t have much involvement in the decision process as I trusted Stuart to make me a lovely ring that I knew I would love,” explains Alex.
In reality: “Stuart wanted my wedding band to match and complement my engagement ring but not overpower it with diamonds. He always knew what he wanted for his ring – I guess working with rings and engaged couples day in day out you start to think about these things!” laughs Alex. “We also added personal messages inside our rings which we haven’t shown to people – it’s a romantic gesture between ourselves.”
Words of wisdom: “We highly recommend going to a jewellery workshop and designing the rings yourselves along with the jeweller, as it’s more personal and romantic,” advises Alex. “It means you may have the only design of that kind in the world, which is a nice thought!”

The jewellery shop: Stuart made the rings in his own workshop at James Brown & Partners in Glasgow’s Argyll Arcade. “I actually didn’t see my ring until the ceremony,” says Alex. “I completely trusted Stuart with the design. He had measured my ring finger in the shop months before so it was a perfect fit!”

I’m totally made up! Advice from the experts

Slice of the day – Dynamic band offer many styles

Into the Groove – Awe your guests with full ensemble

The Reel deal – Report to the dancefloor

A retro revival – Riviera will rock your socks off