“Nobody could believe how calm I was,” smiles Katie-Anne. No wonder – despite taking on the majority of the planning herself, the bride had her friends and family impressed with her cool-as-a-cucumber attitude.
She met future hubby Youcef while they were both working as Thomas Cook reps in Tunisia, before returning to the UK together. After a birthday proposal in Turkey, it was up to Katie-Anne to take charge of the wedding prep: “Youcef had never been to a British wedding before (even though he’s British) as he was brought up in Tunisia, so it was quite hard,” she explains.
A family friend pitched in by helping out with the flowers. “We had artificial flowers, which I’m not normally a fan of, but my friend did us proud with her beautiful cream roses.” The bride’s lace gown, along with the gorgeous one-shouldered pale-blue bridesmaid dresses, were from True Romantica in Kenilworth.
The couple chose The Torrance Hotel in East Kilbride Village to say their I dos, which was the perfect size for their 55 day guests and additional 40 evening guests. Their first dance, to All My Life by K-Ci and JoJo, had a hairy moment when Katie nearly tripped over her dress. (Gotta watch that train!) But all worked out fine in the end.
So, after pulling off the perfect big day, what’s Katie-Anne’s top tip for brides? “Don’t stress!”

Venue The Torrance Hotel in the Village, East Kilbride.
Dress “I bought the one and only dress I tried on!” says Katie-Anne. True Romantic Bridal
Photographer Alice Alves Photography.
Favours Mint-filled silver love-heart tins with their names and the wedding date engraved on them from eBay.
Cake The MOB’s partner made the wedding cake, and the couple also had a cupcake tower from Cakes by Lesley in Kirkintilloch.
Invitations The “very talented” Dolly-Bird.
Rings and jewellery Ernest Jones. 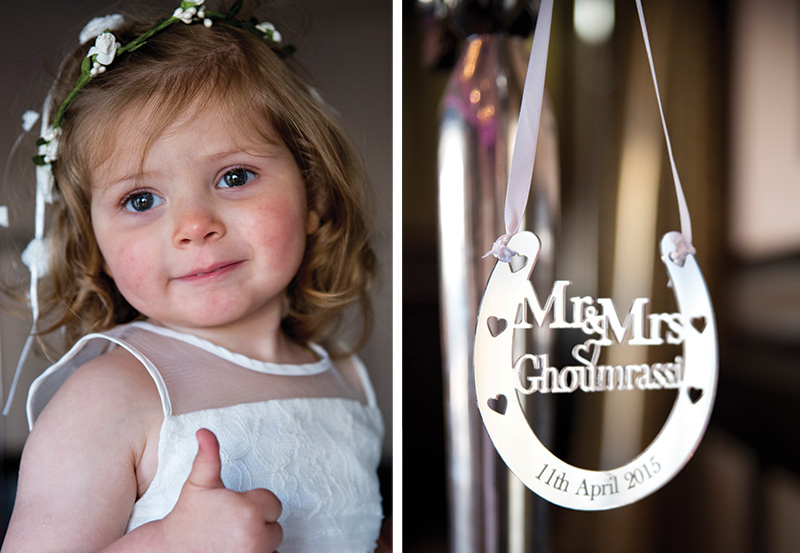 Go your own way: all you need to know about bespoke and personalised wedding and engagement rings from Scotland-based jewellers

Allsorts Clay creates personalised toppers that are made to last