The crowds have dispersed, the bunting’s been taken down and the confetti swept up – Dunblane may be through with what’s been dubbed ‘Scotland’s Royal Wedding’, but here in the BSW office, we’re still buzzier than the Wimbledon final over Andy Murray and Kim Sears’ recent big day.

Okay, it’s already had its fair share of column inches, but we can’t not talk about ‘the dress’. There was feverish speculation in the run-up to the nuptials as to what Kim might wear and – as editor Beth predicted on one of her two guest appearances on the radio – it was a gown by bridal designer extraordinaire and go-to red-carpet dresser Jenny Packham. Although reaction was mixed to the billowing, bespoke embellished silk creation (with some social media chit-chat saying that it didn’t flatter her figure as much as it could), Beth gives it the thumbs up: “The beaded sleeves were a bold look and a real coup de grace to the changeable Scottish weather. And after the recent vintage-inspired lace-athon of other celebrity wedding gowns in the trail of K-Middy, it was really refreshing to see Kim donning a dress made from a less fussy fabric, albeit one that’s beautifully embellished and draped,” she says. 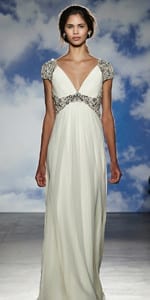 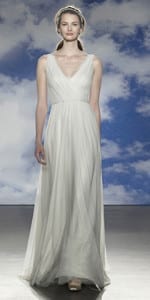 If you were a big fan of the-now Mrs. Murray’s wedding garb, check out Jenny Packham’s Noa (far right) and Lavinia (right) gowns, both of which are in a similar vein.

With Andy’s multi-million-pound fortune, we’re sure the couple could’ve called upon the services of the elite wedding planners and vendors preferred by the super-rich, but it turns out that the famously down-to-earth couple actually looked to some of BSW’s favourite homegrown wedding vendors to bring magic to their day.

We know, for example, that Edinburgh-based event florist Planet Flowers were called in to transform the already awe-inspiring Dunblane Cathedral for the ceremony. We chatted briefly to the company’s chief floral magician, Gemma Bain, who said, “We are allowed to say that – yes – we were the floral stylist for Andy and Kim’s wedding but sadly that is all we are allowed to say!” A quick online search, though, yields some probably-craftily-taken tabloid shots of the cathedral looking truly spectacular with tall, elegant trees adorned with glass bubbles and ebullient clusters of small white flowers lining the aisle. One word: wow.

Glasgow-based stationer E.Y.I. Love had the enviable task of working with Kim and Andy to create invitations fitting for the wedding-of-the-year-so-far. Again, there’s only so much that designer Lorna McGinnigal can reveal, but safe to say the company were over-the-moon when the couple approached them. “They had seen some of our designs online and had really loved our blush pink and gold foil designs. We worked together with Kim to design something soft and romantic, taking inspiration from our more elegant wedding designs that she had loved. It truly was our honour to work with such a fabulous couple. We wish them every joy and happiness in their married life together,” beams Lorna.

Judy Murray is almost as famous as her champion son, so there were plenty clamouring to get an eyeful of her ensemble that rainy Saturday afternoon. We were thrilled when we discovered that it was none other than Joyce Young OBE who created her super-chic outfit. “We were honoured that Judy chose to come to us to have her special outfit made for Andy and Kim’s wedding. She looked fabulous in a cream wool coat and straight dress in mink with ivory bodice. A fitted short beaded guipure 3/4 sleeve top completed the dress,” reveals Joyce, with a nude suede shoes and matching bag almost completing the outfit.

We say almost, as it was over to one of Glasgow’s finest fashion talents to, quite literally, top off the look: milliner William Chambers. “Judy called ahead and came to visit me at the Italian Centre on Ingram Street in Glasgow. We have a ready-to-wear collection in the shop, but Judy opted for one of our couture pieces, the Milano Twist, which we make to order,” he explains.

“The version she tried on in the shop was gold and navy, so we looked at her swatches of her outfit and colour matched the hat to the lace on her dress, and changed the crin trim from navy to cream,” confides William, adding that, “she was absolutely delightful to work with and really trusting in our service, happy to take our advice and opinion. It was so great that she chose two Scottish designers for her hat and outfit ­– supporting local talent and craftsmanship.” Hear, hear William!

Hats off: Scottish milliner to collaborate with Phase Eight

8 leading bridal brands and where to find them in Scotland

Great Scots: 9 homegrown wedding designers that you need to know about

Wedding dress shopping in coronavirus times: what to expect before and during your appointment

How much should a mother of the bride or groom outfit cost?