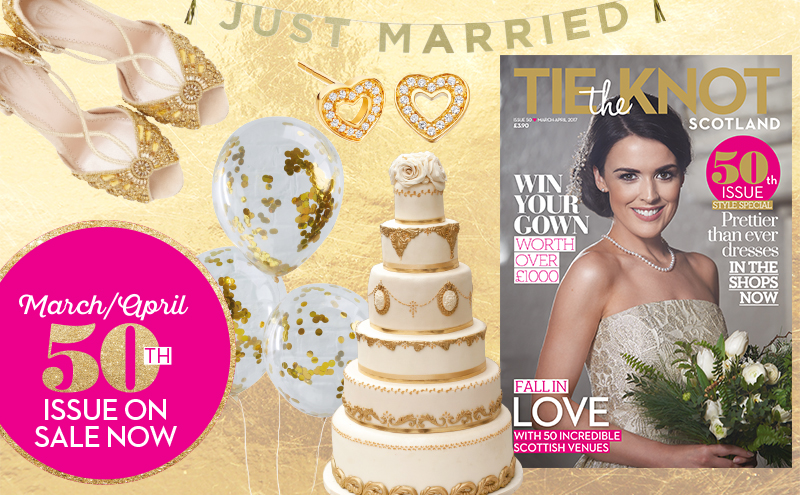 There’s nothing we love more than helping brides and grooms-to-be plan one of the most important milestones in their lives when they tie the knot. We had our own big day recently when we celebrated our 50th issue arriving in shops. Putting together the March-April edition was much like organising a wedding: lots of hours dedicated to making it something special for everyone to enjoy, dealing with some of Scotland’s best suppliers and picking the right outfits.

We couldn’t let our golden anniversary pass without plenty of fanfare, and decided the best way to do this was with lashings of the decadent metallic. Our Something New section pays tribute to gold products with three themes: rose, yellow and burnished. There’s also a stunning Golden Girls shoot and a pretty stationery selection in Spandau Ballet’s favourite lustre.

We trawled the rails at Scotland’s bridal hotspots for marvellous metallic gowns for the breathtaking Golden Girls shoot at Borthwick Castle, but the team also took a trip down memory lane for a fun decades shoot that even managed to make the Eighties look cool.

We also look back through our past and the history of weddings. This issue’s Talking Point time-travels through the past 50 years and investigates the huge changes that have taken place, including Scotland’s adoption of same-sex marriages and the technological advances that – although fantastic – have put us all under pressure for our wedding to become Pinterest perfect and Insta-famous.

Our 50th issue retrospective documents the magazine’s 16 years on shelves – TTKS could now legally get married – as we delve into the archives to showcase previous covers, remember highlights from our bridal shoots and reminisce about real-life weddings. We’ve come a long way, baby!

Also amongst our 290 pages are the coolest hen and stag sleepover party pads, 50 fabulous dresses available in Scotland’s bridal boutiques and honeymoons based on modes of transport (ideal if your fear of flying has seen you holiday in Millport for the last few years). We also chatted to newly married wedding industry experts to find out what insider advice they have for you when sorting out your own special day.

There’s our usual peek behind the veil at real-life weddings, including a sun-drenched beachy day at The Waterside Hotel shot by Pulze Photography, and the imitable work of Parris Photography, who captured Lisa and Mike’s nuptials at Abbotsford House. But special mention goes to ringbearer Liam, who was so confident in front of Emma Sanderson’s lens that he (almost) stole the show when auntie Tsitsi got hitched to her groom Gareth at House for an Art Lover.

It was a case of ‘go big or go home’ for our venue’s section this time, as we dedicated an impressive ten pages to singling out the country’s top venues for categories including luxury, city centre, waterside, blank canvas, and castles and stately homes. If you’ve not booked up yet then have a pen and paper ready to compile your shortlist!

Don’t worry about an anniversary present for us – treat yourself! The new issue hits shelves on 3rd March and costs £3.90, but you can subscribe for the whole year for just £18.

Behind the lens 4: we speak to some of Scotland’s top wedding photographers

Fix up, look sharp: the coolest kilts and suits in Scotland for 2022 grooms