We all know a good band will get the party started, but hiring talented musicians to play at your ceremony creates a magical atmosphere 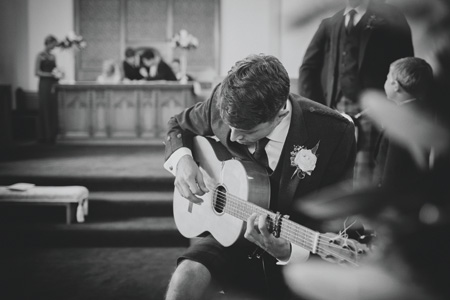 When you work at a bridal magazine, every now and then you can’t help but make a few mental notes for your own wedding – even if it does make you feel a bit like that single friend we all know with the secret Pinterest wedding planning board. For example, I’d always thought I might like to walk down the aisle to Kissing You by Des’ree, and one day, while interviewing a string quartet, they mentioned they had a YouTube video of themselves playing it. Obviously, as soon as I finished the call, I shoved my headphones in and loaded up the video. About 17 seconds in, I promptly burst into tears at my desk. I’d stumbled upon the difference between a live performed version of a song versus a professional recording. I’d also worried my colleagues.

“Live music can make such a difference, especially during your ceremony where everyone sits together and can enjoy the performance of the musical choices of the bride and groom,” says viola player and soprano Nina Kopparhed (ninakopparhed.com). A live performance definitely touches the emotions in a way that a recording simply cannot, especially as us Scots are biologically programmed to well up at the sound of bagpipes and swell with pride at coming from such an amazing country – something you tend to forget during the eleven and a half months of rain we get. Even couples who see a wedding band as an absolute essential might not even think about having live music during other parts of their day, but it’s definitely something to consider as it creates a sense of occasion that no CD can match.

Eat to the beat

While a wedding band’s main aim is to get everyone up on the dancefloor, music for your ceremony, drinks reception and meal is more focused on creating atmosphere – giving you control of the mood you want to create. A lone piper is highly emotive, whereas an Ed Sheeran-esque singer playing guitar is a much more contemporary choice. Pianists can range from classical and classy to camp cabaret, or even a seriously cool jazz-bar feel. Strings really set the tone for a grand affair, but even violinists aren’t frightened to have some fun with the song choice to lighten the mood.

“The secret is music that is not obtrusive,” says Fergus Wood of Les Trois Blondes (les-trois-blondes.co.uk). “String quartets and harpists are really popular. We’re actually the first and only French-style band in Scotland playing gentle, romantic, Parisian café music.” 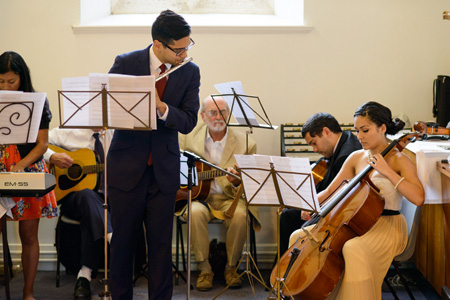 The time is now

If money were no object, you could walk down the aisle with Stevie Wonder playing the piano, have Michael Bublé serenade everyone as they enjoyed the wedding breakfast, and ask Lady Gaga to get the party started. But most of us are six zeroes away from that sort of extravaganza. “I’d recommend you go for quality,” advises Nina. “Book fantastic, professional musicians for a shorter time, rather than several hours of an act that is cheaper but not as good.”

This means deciding which part of the day you want to put to music. “The arrival of the bride is one of the most memorable events of the day,” says clarsach player Mary Garrad (marygarradharp.co.uk). “So I’d recommend live music for the ceremony. Nothing creates such a romantic atmosphere, and you’ll never forget walking down the aisle to your chosen music.”

If you prefer the recorded version of your walking-down-the-aisle song, having live music during the drinks reception is a great alternative. This part of the day can often feel the least fluid, as you’re off having your photos taken and your guests are left to mingle. Musicians make a great talking point for guests who don’t know many of the other people at the wedding, and the music helps to disguise the fact that everyone is waiting around for their dinner! 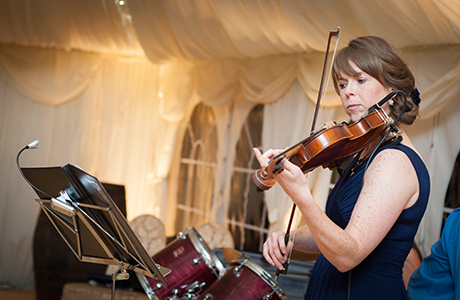 Music during the meal creates a sophisticated ambiance – and it’s always handy to have a drummer on hand during the speeches for a cheeky ‘ba dum tish’ after the best gags. If you don’t have a massive budget, be realistic about what will be in your price range: “Anything beyond three or four musicians can cost a fair bit,” says Fergus. Probably not a worry if you’re marrying a prince – Kate and Wills had the London Chamber Orchestra for their ceremony.

“The most unusual request we’ve had as a string quartet was being asked to play Another One Bites the Dust as the groom walked in,” laughs Nina. “He requested it himself as a surprise, so we were slightly worried the congregation wouldn’t find it funny. Luckily, they loved it.”

You’d be mistaken for thinking traditional and classical music are your only options, but mixing older instruments with newer music goes down a treat – think ‘bagpipe rock band’ Drums N’ Roses smashing out Sweet Child o’ Mine or Afton Strings’ take on Lady Gaga’s Bad Romance. “We’ve had a lot of Star Trek and Star Wars requests, even playing at a whole Star Trek-themed ceremony before,” says Nina.

“I once played the Star Wars theme tune as a surprise for the groom,” Mary adds. 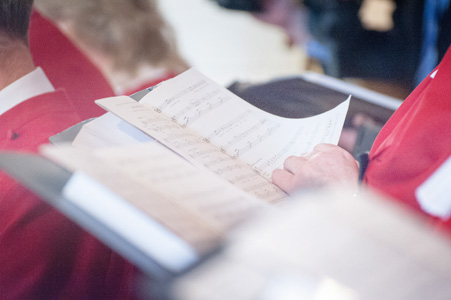 Strings, bagpipes and harps/clarsachs have a more traditional sound, so you can get away with quirkier song choices that might sound a bit too wacky in their original form. A good mix of pop tunes, classical, showtunes and film and TV themes should keep guests on their toes.

When visiting Mar Hall recently, I borderline-crashed a wedding as I sat just outside the drinks reception and enjoyed the pianist Alex Graham (alexgrahampiano.co.uk) dropping some Oasis, Avicii, Calvin Harris and Kanye West in among the more trad tunes. There’s a reason why every week on The X Factor contestants try out different arrangements and mash-ups, or that the Live Lounge is such a success for Radio One – it’s wonderful to hear a song we know and like in a different style.

So you know what you want and when you want it. Now you just need to figure out who can give it to you! Wedding shows are a great way to meet some suppliers, but they can be tricky for your daytime divas. “Lots of the people I play with are professional musicians, so it’s very difficult for us to take part in a wedding show on a Saturday because we’re probably busy playing at a real wedding, event or recital,” explains Nina. This can make things difficult for you, as we wouldn’t recommend booking someone from a website listing alone without seeing or hearing them (either live or through a screen). “You can watch our YouTube videos, which are completely live and unedited,” points out Nina. “Edited videos will have extra reverb and can correct wrong notes, so look for videos that have been filmed in one continuous take, as you’ll only get one take on the day!” 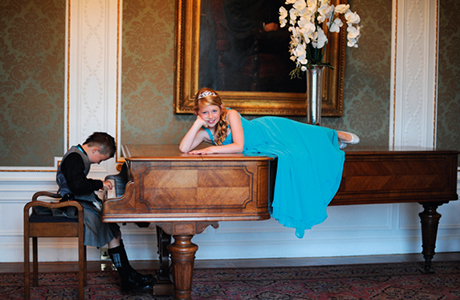 As well as looking online, it’s worth asking around for tips. “Venues and celebrants will all have great recommendations,” says Mary.

“If you’re getting married on a Saturday during June, July or August, you should book as soon as you possibly can,” advises Nina. “The best ensembles can be booked up to three years in advance.” Yikes!

“Most musicians only require a small deposit to book the date,” points out Mary. But don’t worry about your lack of organisation at this point. “All the timings, details and song choices can be finalised much nearer the time,” she says.

Live music for your ceremony, drinks reception and wedding breakfast might seem like an unnecessary expense when the venue can tee up a tannoy for you, but it’s unrivalled in creating a special atmosphere. The earlier portion of your day, before the drinks are flowing, is much more widely remembered by your guests too. And there’s no limit to your creativity, because you’re dealing with talented people, many of whom will be happy to learn a specific song for you.

We spoke to a bride recently who shared this lovely moment from her big day: during the signing, the groom’s mother surprised the happy couple with a song she’d written for them. Bride Fiona Mooney told us: “We already knew she had the voice of an angel, but that was truly special for us.”

We’re welling up just thinking about it. (Read more about Fiona and Steven’s day on page 201.)

A question of taste

An insider’s guide to planning the perfect marquee wedding

Bling up your wedding rings with diamonds, engraving or a statement design

Love letters: our bridal jewellery A to Z

Global gathering: take your guests round the world with your entertainment