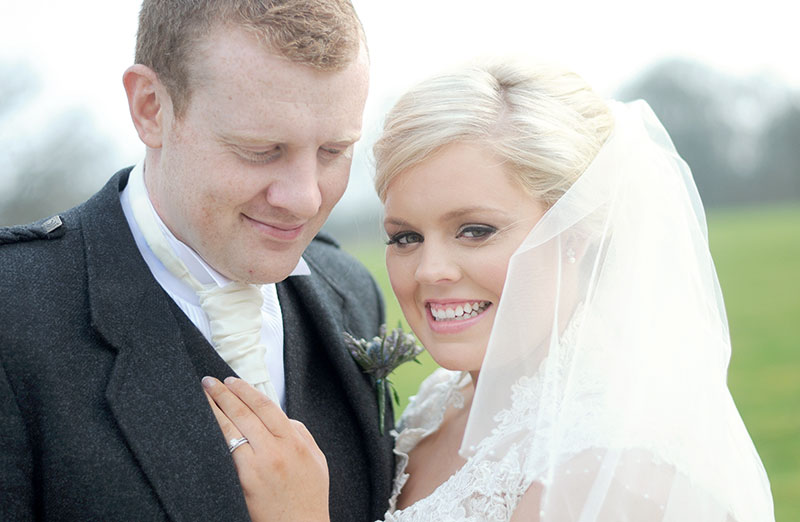 A traditional Scottish wedding was what Rachel and Alan had in mind when they set about planning their big day. “Alan’s family are from the islands and he loves his heritage so that played a huge part in our wedding, from tartan carpets and thistle buttonholes to haggis, neeps and tatties as our starter and shortbread and whisky for our favours.”
For Rachel, a stand-out part of the day was her pretty flowers from Lavender Blue. “They were simply stunning and exactly how I imagined them. Allie, the owner, was just amazing. I changed my mind a few times about what I wanted and she couldn’t have been more helpful! She had great ideas and totally just got what I was looking for – and it was all very reasonably priced,” she raves.
As the lovebirds were due to jet off to New York for a chic city-break honeymoon, they named their tables after NYC landmarks.
Chief bridesmaid (and Rachel’s sister) Erin took a tumble on the stairs on the way to the altar: “All you heard was a huge gasp from the guests… But she took it all in her stride and was up quicker than she was down, with a huge smile on her face. And the best part is she was wearing flat sandals,” giggles Rachel. The best man paid tribute in his speech, thanking Erin for her “impressive splits display at the altar!”

Venue Alan’s local church, Holy Cross, in Croy, followed by a reception at Glenbervie House Hotel in Larbert
Dress A Justin Alexander dress from Wedding Wise in Barrhead
Photographer Ramsden Photography – “We wanted someone really laid-back. Jon Ramsden fitted the bill.”
Flowers “First-class service” from Lavender Blue
Groomswear Mackenzie Menswear. “It was the only place in Glasgow we could find the MacLeod tartan.”
Makeup Victoria Faulkner at Complection Perfection

Allsorts Clay creates personalised toppers that are made to last