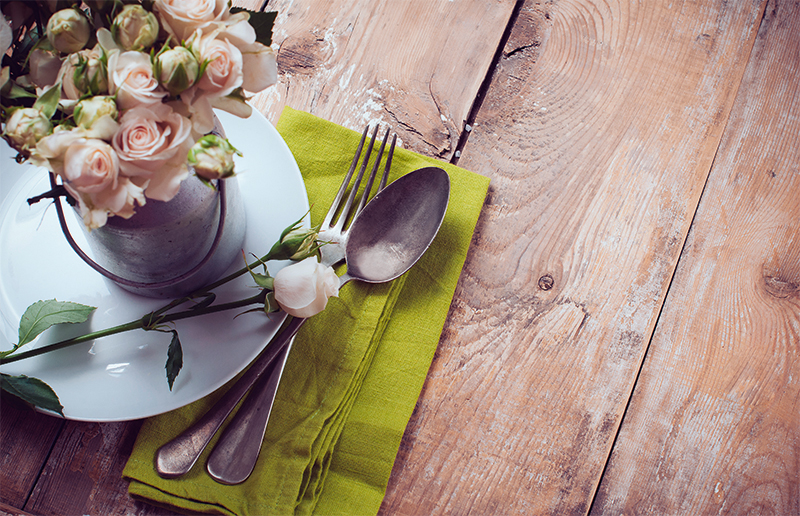 Rich, tender venison from Blair Atholl Estate, salads topped with nasturtium and lavender from Argyll, and beetroot from Glamis Castle. If this snapshot of ingredients is anything to go by, when it comes to Scotland’s caterers, the nation’s larder is being put to good use.

In fact, whether it’s a sumptuous buffet for 200 or a silver-service dinner for 20, caterers are serving up Scotland in an array of different ways, satisfying appetites for menus that are bursting with both provenance and personality.

“When we’re choosing a menu together, many clients want to include something Scottish,” says Reagan from Glasgow’s Reagan Hallett Catering. “This might mean including an ingredient such as haggis in the canapés, or we might be asked to do a whole seafood spread.”

Sourcing ingredients from locations around the country (including micro herbs and edible flowers), Perthshire’s Wilde Thyme is another champion of the home-grown. The company also works closely with several whisky distilleries and often will add a wee dram to marinades, sauces and ice-creams. 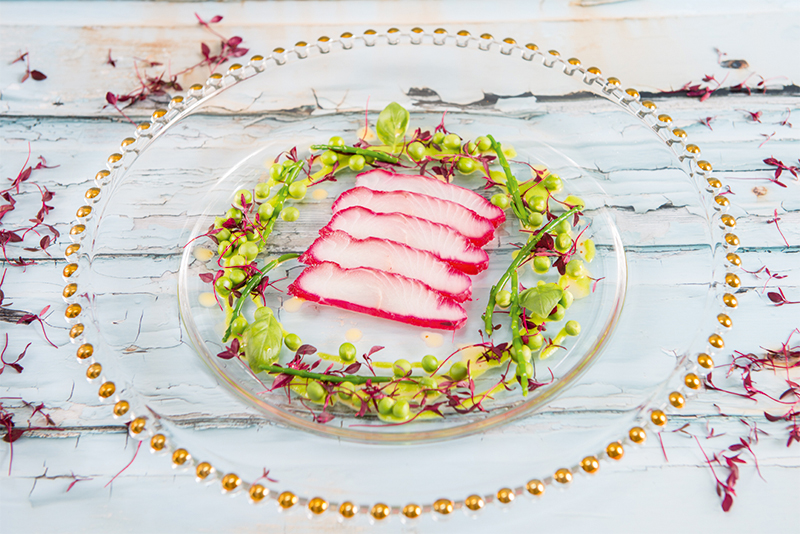 So what’s being served and how is it being dished up? “Scottish food is more exciting than ever, but as we have such good ingredients, it is sometimes best to let them do the talking, while allowing colour to be a big factor,” says Malcolm Burberry, the head of events at Wilde Thyme.

“I also like to keep it really simple and let these ingredients speak for themselves,” adds Reagan. “Smoking our own salmon and serving it warm with crusty bread and horseradish crème fraîche, for example; or fresh oysters, shucked to order in front of you, with just a squeeze of lemon; or seared venison saddle served rare, with homemade rowan jelly as a simple canapé. All delicious.”

Heritage Portfolio is a firm that prides itself on securing the best of British via its personal approach. “We get to know our suppliers incredibly well and send our chefs to meet the farmers or fishermen,” explains head chef Brian Canale. “So, whether it’s sourcing scallops the size of your hand from the west coast of Scotland or the sweetest early rhubarb from a Yorkshire valley, our team are forever on the hunt in pursuit of outstanding taste and flavour.”

From here it’s about using creative flair to turn such brilliant ingredients into works of art on a plate.
When it comes to serving up tartan with a creative twist, the times are changing – quite literally. Brunch and afternoon tea turn the tables on the traditional sit-down dinner, while couples are also borrowing the tradition of a pre-ceremony cocktail hour from their American cousins.

“Anything goes at the moment,” says Lisa Johnson of North Berwick’s events and catering company Duke Street. To deliver what couples want now, her approach is just to be as flexible as possible – often working with a couple’s Pinterest page to draw out the culinary elements they most want at their wedding. “We’ve done afternoon tea instead of savoury canapés where champagne was served in vintage teacups, and we have created individual picnic baskets for guests that included bubbly and meze dishes.”

When it comes to drinks, couples want to lay on soft drinks as well as alcoholic ones. To this end, Duke Street has done away with the uninspiring orange juice of old and now specialises in offering first-class non-alcoholic options. “We can serve homemade lemonade in a variety of flavours, or locally made cordials such as cucumber or elderflower that non-drinkers will really love,” says Lisa.

Global influences also mean that traditional ingredients are being used in ever more inventive ways. “Slow-roasted shoulder of lamb with preserved lemons and garlic is a very popular option on our sharing menu,” says Reagan. “So is our whole side of wood-fired baked salmon with garlic, fennel, capers and lemon. I still use Scottish produce to create these dishes – they just might not be traditionally Scottish recipes.”

The team behind Three Sisters Bake have much the same approach. “Our wedding menus allow the bride and groom to put together a selection of a few different main courses,” says Linsey Reith, one of the Sisters.

“They might choose a traditional Scottish baked side of salmon with lemon and herbs, but they’ll have that alongside a Moroccan lamb tagine. Whatever the origins of the dish, however, we put it together using local Scottish produce, which has passed through as few hands as possible. This is the best way for us to promise great taste and freshness.”

An evolution in serving styles also means that presentation is still pivotal. Whether its Wilde Thyme showcasing its sharing starters in bamboo boats, or Scottish dishes being served alongside other international flavours on one of Reagan Hallett’s sharing menus, eating is most definitely a more sociable and interactive affair.

“We’re meeting a lot of couples who are looking to move away from the traditional three-course plated wedding meal,” says Linsey. “We answer this demand by offering overflowing sharing platters for starters, with a dessert or cake table to finish up. Service is less formal and dishes are less traditional.”

Inspired by the street-food revolution, some couples are even taking this trend one step further by looking to food truck-style vendors to inject something a little bit different into the proceedings. From falafel and flatbread to fish and chips in funky paper bags, the trend at the moment is all about how to dress up casual home-cooked food and dish it out. “People like the theatre and the informality of what we have to offer,” explains Cat Wright of Wild Rover Food.

She and her team travel the country in a Land Rover, using a field kitchen to cater for weddings. “As well as seeing their food being prepared, we get guests involved in the serving. For example, we’ll ask someone from each table to come to the kitchen to collect the beef brisket and salads and take them to the table – much like you do at a family meal.”

That desire for an intimate affair is also being translated into increasingly personal menus that reflect the couple. “We always chat to the bride and groom about their favourite food, then we have a tasting when they’ll meet our chefs and we build their menu together,” says Heritage Portfolio’s Brian. “We are finding that more couples want bespoke menus consisting of quirky ways of serving their favourite food. Or it might be the dish they ate on their first date, or a favourite lunch from a holiday in a beach shack.”

Reagan, meanwhile, also welcomes a highly personal approach with a bit of bring-your-own. “Quite a few of our clients want to provide ingredients themselves,” she says. “This includes venison from the estates, home-reared meat, shellfish, cheese and smoked products that they might produce themselves. It’s great to be able to incor­porate high-quality products into the menu with that added personal touch.”

To the delight of jaded palates everywhere, it is this combination of fresh, local produce and bespoke, personalised menus that is reinventing the traditional wedding breakfast.

Feast on these fabulous menu ideas

A flower-filled, village fête-inspired wedding in Kintyre that lasted a week!