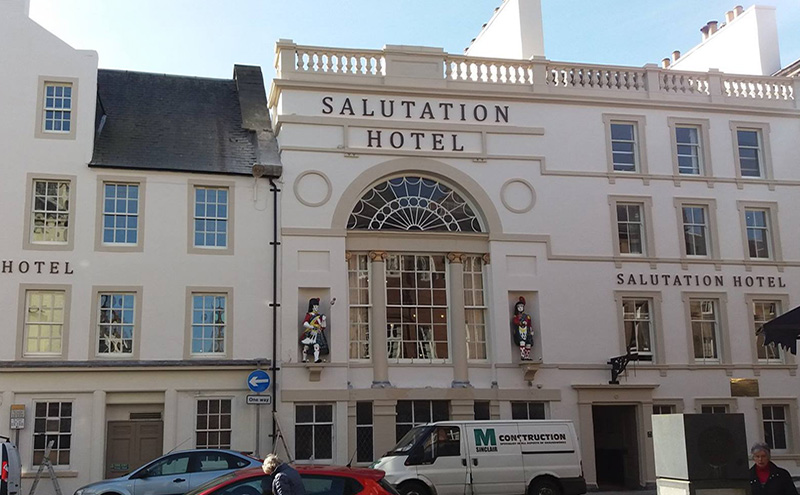 The Salutation Hotel in Perth has gone through a pretty spectacular transformation recently. The venue’s grand façade has undergone a facelift and it’s looking more impressive than ever.

Established in 1699, the hotel has enjoyed a complete frontal restoration which included repointing, painting the façade, replacing windows, improving the signage, strengthening chimneys and adding improved lighting. The massive project also saw the two famous pipers that stand proud above the entrance restored to their former glory.

Locals may be aware of the ‘Perth City Plan’ to take the city and its surrounding areas into the 21st century and beyond. Strathmore Hotels, the group which manages the Salutation Hotel, felt it was important to get involved and take part in this forward-thinking scheme due to the hotel’s status as a landmark building in the city.

“We are extremely delighted to announce that the hotel façade has now been completed and thank our many customers for being so patient while the project was underway. A lot of detail has been put into the project to make sure the hotel really stands out with great splendour,” says Lorraine Geddes, Sales and Events Manager at the Salutation Hotel.

25 of the best bridal headpieces and hair accessories

Bored of Blackpool? We suss out the new 'It' places for your hen and stag

City slickers: 10 of the best metropolitan wedding venues in Scotland