Add a splash of Hollywood glamour to your day by rolling up in a car that looks like it has been driven straight off the silver screen, writes
Sarah Gillespie

Cars play a pivotal role in so many iconic films and television shows. From Thelma and Louise plunging off a cliff in their Ford Thunderbird convertible, to time-travelling in the DeLorean, to the Batmobile speeding off into the night after saving the day: you might be completely uninterested in cars, but there will always be some that catch your eye. Admittedly, you might not want to show up to the church in the Ghostbusters car (if you do, don’t let anyone stop you!), but there are lots of ways you can let your favourite film influence your choice, so we’ve hunted down the very best screen-influenced wedding transport meaning you can arrive at your venue like a movie star.

GREASE IS THE WORD 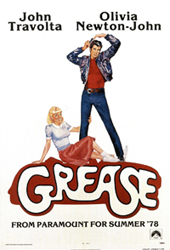 We’ve noticed an increase in fab Fifties wedding cars lately, and it can’t be a coincidence that retro-inspired weddings are as popular as ever. Our first thought when we spied these 1958 Cadillac sedans from Excalibur Wedding Cars (excalibur-limos.co.uk pictured above ) was that you and your new hubby would be dead ringers for famous lovebirds Danny and Sandy! Sadly, unlike its famous counterpart, these sedans will not be able to fly off at the end of your big day, but they will still look the part.

When you were little, Sunday afternoons watching Black Beauty normally ended with you begging your parents for a pony. Now you’re a big girl, you don’t have to beg! Arriving for the ceremony in a romantic carriage pulled by a stunning horse is a fitting tribute to this childhood favourite. Tartan Carriages (tartancarriages.com) has a range of carriages to suit all seasons so you can travel in style all year round.

When Volkswagen relaunched the new Beetle in 1997, it was only a matter of time before Herbie had a remake of its own. If you’ve fallen in love with these bugs, why not pick one for your wedding transport? This Volkswagen Beetle Cabriolet is available from Ecosse Classic Wedding Cars
(ecosseclassiccars.co.uk). “Many brides they don’t see themselves as the ‘type’ for a Rolls-Royce or a Jaguar,” says John from Ecosse. “So our original ‘Love Bug’ on its own, or paired up with a VW Splitty bus is a quirky alternative for those who like something a wee bit different,” he adds.

Another nostalgia-packed choice, this Austin 12-6 Ascot from Something Old (something-old.co.uk) is a gorgeous vintage car with bold red and cream tones which reminds us of Chitty Chitty Bang Bang. “A car like Ruby won’t whisk you off to your ceremony – instead, she’ll gently slow everything down to let you savour the moment, a step back to an era when things were simpler,” explains owner Clare Niven.

Sometimes it’s not enough to have a car that’s merely influenced by your fave film – only the real deal (or at least its closest replica) will do. Star Car Hire (starcarhire.co.uk) rents out this Knightrider car for weddings. The company’s Mike Barr told us: “The generation who are getting married now grew up in the 1980s with TV shows like Knightrider and The A-Team. They have many happy memories of watching these programmes, so it’s a lovely nostalgic touch to have the cars as part of their big day.”

On your wedding day you want to be graceful, classy and beautiful – all qualities shared by Lady Penelope from Thunderbirds! Who didn’t envy her amazing pink Rolls-Royce? You might have your work cut out trying to persuade H2B to get in a bubblegum-pink car, so we thought the above silver version from NIL Wedding Car Hire (nilweddingcars.co.uk) would be more suitable. A classic car is an elegant choice, and its timeless appeal means your photos will look good for years to come.

With the baddies unmasked and everything always nicely wrapped up in time for the credits, the ‘happily ever after’ endings in Scooby-Doo are legendary. If you hope your wedding has a similar happy ending, choose a VW Campervan, like this one from AMM Wedding Hire (ammweddinghire.co.uk). Big enough for four passengers, it means you can travel with your bridesmaids or mum and dad – and wear a massive gown without
worrying about getting stuck!

Another Star Car Hire vehicle, this replica of the 1974 Ford Gran Torino favoured by the famous TV detectives is great for a blast from the past as you start your new future together. You might think of your other half as your partner-in-crime, so opting for one of the most iconic crime-fighting cars from the silver and small screen would certainly put a smile on guests’ faces.
Previous Article

PHOTO ALBUM: Travelling in style on the big day

Coastal wedding in Edinburgh with sunshine in February

(Not) just the two of us: Larger transport ideas