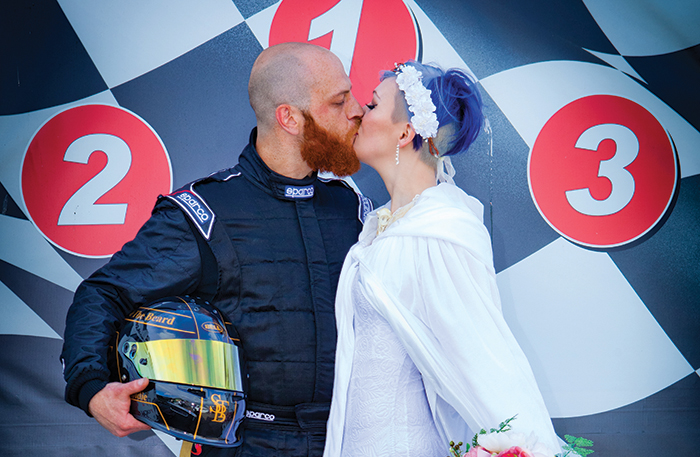 “We got engaged after two years together, but we didn’t get married for another eight years. Neither of us wanted a big wedding, so it was never at the forefont of our minds to start planning one – which is why it took us so long!

Steven is a huge car fanatic and races frequently at Knockhill Racing Circuit. As Knockhill has pretty much become his home from home, one of his friends jokingly commented that he should get married on the track. When he told me, I thought it was a great idea which shocked him as I’m not a particularly big racing fan.

We booked the wedding on a day where there would be a track event so that there was also some kind of entertainment. This meant there were non-guests there on the day who were able to spectate as our ceremony took place during the race lunch break.

It was the first wedding Knockhill had hosted. We can’t thank Rory Butcher, champion racer, ARDS Instructor and events organiser at the track enough: he was pretty much our wedding planner!

Along with the obvious car theme, there were elements of Lord of the Rings throughout as we are both big fans of the books and films. My outfit was very Lord of the Rings inspired. I also had a Harry Potter garter and a Mockingjay brooch from The Hunger Games attached to my bouquet.

I didn’t walk down the aisle. Instead, Steven drove up the track to the start/finish line in his Ford Sierra Sapphire Cosworth and waited for me to arrive behind him as I was chauffeured up the track in a white Porsche 911. Steven opened my car door and we walked towards the celebrant together hand in hand.

We chose a humanist ceremony. We balanced the emotional and serious bits with a lot of funny
elements. Our vows had car, film, and even zombie references!

Top tip: Have your wedding the way you want it and don’t feel the need to follow traditions.”

Get the glossary: The A-Z of wedding films

LOVE the gown, hate the price tag? We reveal ways to save on your dream wedding dress!

Blossoming bridal looks and decor for a Mulan-themed wedding