It’s a day you’ll celebrate every year in the decades to come, but how do you know which date is in the stars for you and your other half? 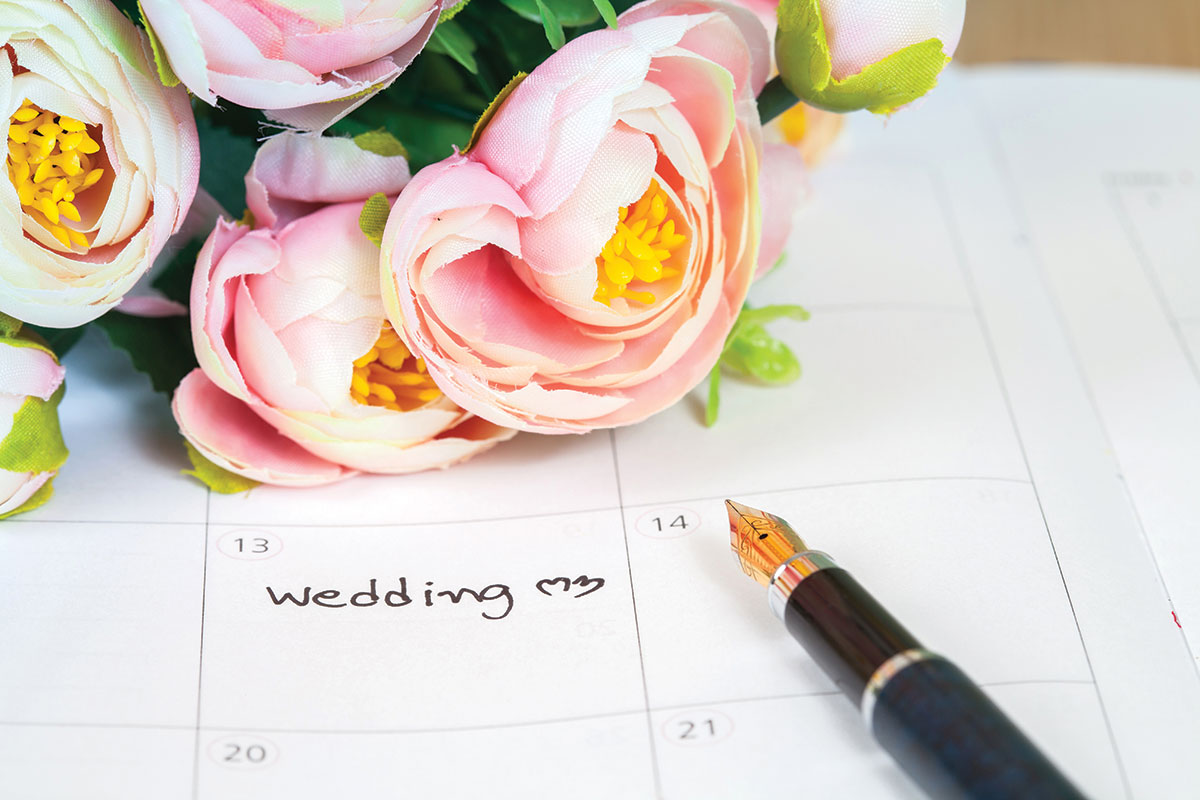 When it comes to weddings, a lot of couples get a bit obsessed with the date. It’s an important focus for people, both on the day itself and in the run-up to it: just think about how many of us download apps to count down the weeks and months till the shindig, or how common it is to see those six special numbers etched into various bits of decor at weddings.

But is there any good reason for this fixation? “It all comes down to priorities, but if a couple decide on a must-have date (as opposed to a must-have venue), it is nearly always because the date itself already has special meaning to them,” says Alison O’Neill, founder of Lanarkshire-based wedding and events planning service Pebblefish. “It could be when they first met or first kissed, or even the anniversary of the proposal.”

That’s straightforward enough – but other explanations are a little less conventional. “One of my brides was determined to get married on her parents’ anniversary, at the exact same venue,” Alison says.

“Another client, who loved musicals, wanted a June wedding because she’d loved the song ‘June Bride’ from Seven Brides for Seven Brothers since she was a child. And I must confess to having helped stage a May the Fourth Star Wars-themed reception.”

Yet, it’s worth keeping in mind that, regardless of whether or not the date is important to you, it represents a significant milestone. “The date is effectively the foundation upon which everything else is built,” says celebrant Paula Wilkinson of Fuze Ceremonies. “So ticking it off the list means you can finally get stuck into the fun of wedding planning!”

If you’re still at the foot of the matrimonial mountain and struggling to pin down the ‘perfect’ date, it might help to understand the logic behind why certain days or months have become the most popular for getting hitched.

For example, like our musicals fiend, you’ll no doubt be familiar with the notion of the June bride, but are you aware of its origins? It’s actually because, back in the 15th century, people used to take their annual bath in May, and so it became tradition for couples to wed in June as they wouldn’t smell all that bad a month later. Delightful.

Of course, it’s not just hygiene that is responsible for June’s popularity.

“The summer solstice or midsummer (20th, 21st or 22nd June) is surrounded by myth, superstition and magic, but it has also long been associated with luck, celebration and fertility, so a fantastic time for young sweethearts to get married,” explains Alison.

“I mean, Shakespeare wrote a play about it and J.R.R. Tolkien included a midsummer’s day wedding in The Lord of the Rings – this is serious stuff, and probably why even today our summer months are still referred to as ‘wedding season’.”

Be that as it may, there is growing evidence that the situation is slowly beginning to change. “In Scotland, the most common time of year to say ‘I do’ has always been the summer; however, figures for 2018 show that more couples actually married in the autumn – and I can’t say I blame them!” says Paula.

“Scotland looks incredible under that gorgeous glowing autumnal light, and wedding photographers adore shooting in it. The season also brings with it a proper chunk of romance in the form of crackling log fires, a slight chill in the air, and the nights drawing in and being dark enough for fireworks.”

Besides, when you live in Scotland, you can never really count on the weather doing what it’s told in summer anyway. When Cheryl McDonald, co-owner of wedding photography duo Canvas & Peach Studios, started planning her big day at Tullibole Castle, she had one thing in mind. “My husband Scott really wanted us to marry on our engagement date, which is in September, but I had always imagined an outdoor summer wedding,” she recounts.

“We just really wanted a nice sunny day, so we originally enquired for May (usually the driest month), but there was no availability until the following year. We ended up taking a chance on June, which is actually the wettest month!”

Eventually, 29th June 2019 rolled around, and while the couple managed to hold their ceremony, drinks reception and photographs outside, their luck couldn’t last. “We got thunder, lightning and torrential rain. But it was the best thing that could have happened, as once it had passed there was the most amazing red sunset – I nearly cried when I saw it. I can now officially say that I had worse weather than all the brides and grooms we’ve ever photographed!”

When it comes to organising your own event, it’s all about asking the big questions. “How flexible and open-minded are you willing to be?” queries Alison. “How much do you really care about the weather and the local scenery? How big is your guest list and is it important that loved ones living far away can make it? How easy will it be for people to take time off work? Do you need to make your budget stretch a little further?”

For Paula, it simply boils down to two key factors: guests and events. “If you’re eloping with nothing but a bouquet of flowers and a bottle of fizz, there’s absolutely nothing to consider. However, the majority of weddings have a sizable number of invitees, some of whom will have a long journey to get there.

If that sounds like your do, it would probably be better to host it over the weekend or the holiday breaks to give guests with children the chance to come along.

You should also check in with other engaged couples to eliminate the prospect of a date clash, and avoid big events like Christmas, Hogmanay and Valentine’s Day, as this could have an impact on attendance.”

There has been a rise in recent years in the number of venues offering ‘midweek’ packages, and it’s no surprise they’ve had such an uptake: often available for a fraction of the price of a weekend wedding, these are a good way for budget-conscious couples to tie the knot without compromising on the venue.

Of course, there’s a reason these dates are so much cheaper. “Before committing to a midweek wedding, I would always recommend you think realistically about the personal and work responsibilities of your guests and whether everyone you’d like to invite would be willing (or able) to use up holiday time to attend,” Alison warns.

“Smaller weddings are likely to be better suited to a midweek date, and there’s nothing to stop you opening up your evening reception to guests who will probably find it easier to come after work. It may even be worth considering an evening ceremony, which is a whole other level of wow!”

And what about bank holidays? “Plan well ahead,” she advises. “Securing a venue is likely to be your biggest challenge – those dates get snapped up fast.”

These issues are worth dwelling on, because once you’ve made up your mind, there’s no going back. “All wedding dates are set in stone and are non-transferable, unless there are extenuating circumstances,” says Amy Parkinson, sales manager at Melville Castle Hotel. “I’d tell couples not to put too much pressure on themselves, but if they have a dream date and it’s within budget, go for it!”

Now, let’s fast-forward a little: your wedding’s in the diary, you’ve sent out the save-the-dates, and you’ve kick-started your Instagram countdown (73 weeks to go, don’t you know). With all the effort that’s going to go into planning this one particular day, how can you ensure it is paid due attention when it arrives?

“From the simplicity of napkins and handkerchiefs, to the quirkiness of centrepieces and favours, or the exclusivity of wine and champagne, pretty much anything can be engraved, embroidered and printed on to personalise and commemorate the date,” promises Alison. “The only problem may be knowing when to stop!”

Your wedding would be nothing without the people you’ve chosen to share it with, so it’s customary for couples to give special shout-outs to individuals who might also be observing their own milestones that day.

“We’re often asked to include guests’ birthdays or anniversaries within the ceremony script if they’re also celebrating,” agrees Paula. “It can be a lovely gesture and a small token of acknowledgement that these guests have put your special event ahead of their own.”

As sweet as it can be having a wedding date that holds deep significance for you and your partner, nothing matters as much as the statement of commitment you’re about to make.

So, having spent two years of her life planning before falling victim to our unpredictable climate, I’m intrigued: would Cheryl do it the same way all over again? “100%,” she says. “We got everything we could have hoped for. We both just laughed the whole day, and I wish I could tell my former self that no matter what the weather does, you’ll still have the time of your life.”

Of course, when all is said and done, let’s just hope that spending so long focused on the date lodges it firmly in your head forever. “Whatever your reasons for choosing to marry on that particular date, just make sure you remember it for all the anniversaries to come!” Alison laughs. Touché.

A nature-themed ceremony and roaring ceilidh at Inglewood House

The planning diaries: two brides share their journey to the top of the aisle