“I love working with colour and wanted to create a cake that illustrated to my clients how they can incorporate bold shades into their designs. I had emerald-green in mind, so I created a moodboard of complementary colours and florals to begin the brainstorming process.

“As this was an exercise in pushing the boundaries of traditional bridal design, I also wanted to test out different florals and foliage for the cake. The more classic large white peonies are teamed with yellow craspedia, blueberries, cloudberries, exaggerated antique-toned hydrangeas and golden autumnal foliage.”

“I have always been enamoured of flowers, and often find myself inspired by the Japanese art of Ikebana (‘arranging flowers’ or ‘making flowers alive’) – this is what I love, and what I tried to incorporate into this cake, made for an event at Ayrshire’s Roodlea Barn. We wanted to create interest from every angle, so there is so much detail in this cake – texture, sharp edges and slight marbling, all on a white canvas. 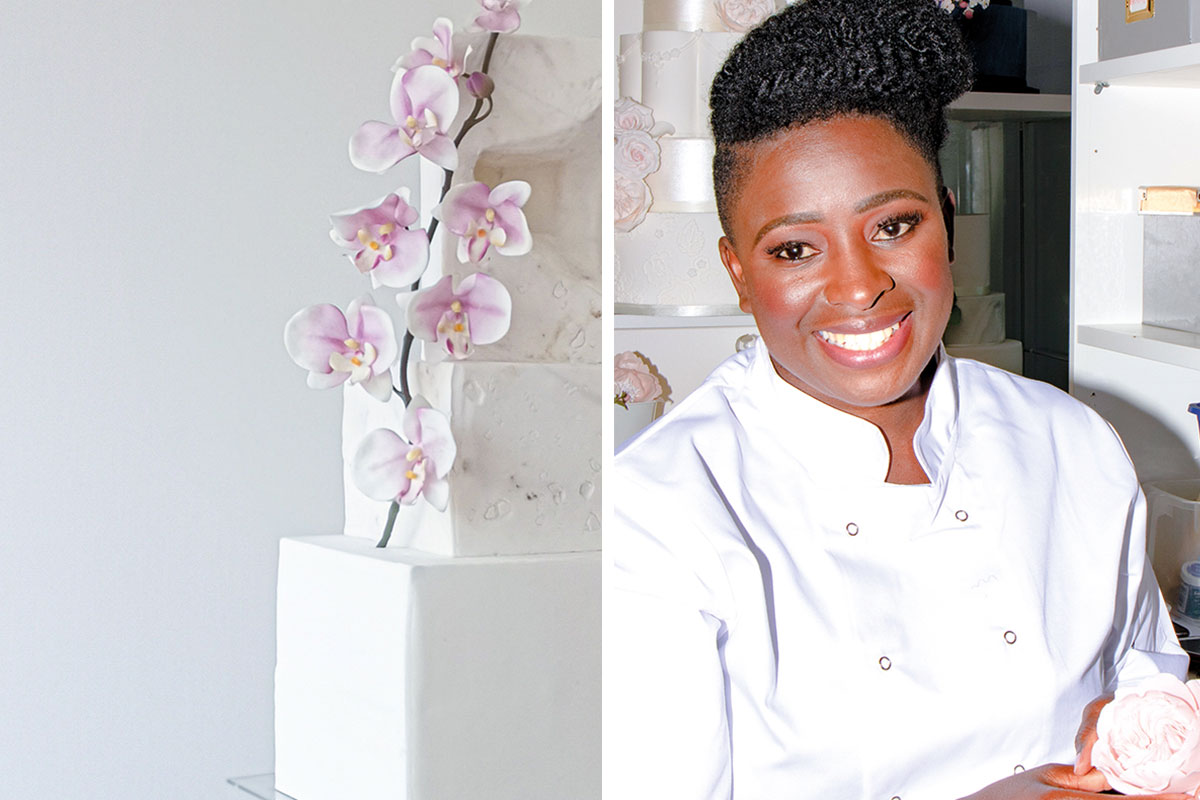 “We also like to explore different flavours to make every bake that little bit more special. This one had a tier of lemon and elderflower, and a tier of our delightful Earl Grey-infused sponge complemented by a zingy lemon curd, with buttercream lightly flavoured with lavender. The third and final tier was vanilla sponge, before all of the components were covered in a white chocolate ganache.”

“This cake was created for an opulent engagement party at The Balmoral Hotel in Edinburgh. The bride-to-be had so many creative ideas for the night, and wanted to come up with an evening that would contrast with her wedding: in opposition to the light, airy, summery vibe planned for the big day, the engagement party was to have a luxurious, candle-lit feel, with a colour scheme of deep, velvety reds and midnight blues, and a generous glint of glamorous gold.

“The monogram was actually taken from the couple’s stationery, and we used a lot of edible 24-carat gold leaf to tie it all together. The flavours included strawberry and prosecco sponge, a tier of dark chocolate with a kirsch and Morello cherry preserve, and a tier of lemon and blueberry.”

“I was named national champion in the Large Celebration Cake category at the Cake Professionals Awards. My winning design, Floral Gold, although commissioned for a 21st, would make a stunning two-tier wedding cake. 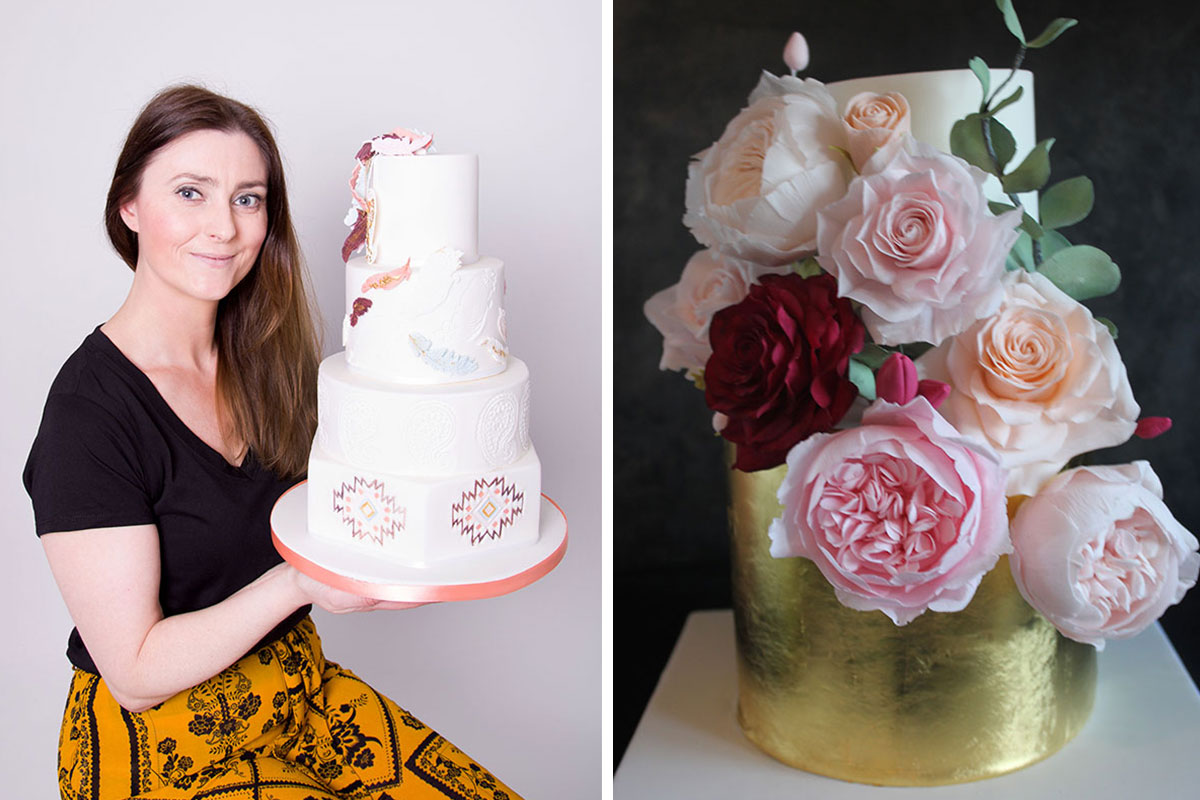 “The brief was to create something elegant, classic and floral. The bottom tier was coated in 24-carat edible gold leaf, which had to be steamed onto the cake. The top tier was then covered in a cascade of sugar flowers – Avalanche, David Austin and English roses. These alone took hours!”

“This geode cake wasn’t actually made for a wedding, but I reckon it would be a brilliant choice for someone’s big day – I’d love to do a multi-tiered version of it (hint, hint!). Geodes have so many permutations and possibilities but I particularly like the Kintsugi method, which incorporates the gold trim – they almost look too good to be real cake, but my creation was 100% edible.

“I started with a marbled fondant base. I then hand-carved the fissure and filled it with rock-candy crystals; I also had to paint the deep amethyst colours by hand. To finish, I employed a little sugar work, making a solid sugar geode heart as a topper.

“It was later auctioned off and helped raise over £1,000 to build an outdoor classroom at Redmyre School in Laurencekirk.”

“This couple had some very clear ideas right from the start: they knew they wanted four tiers and for the cake to be decorated with tartan elements and an ice hockey theme. They were fond of a cake we’d designed for a previous couple that featured tartan and a thistle. We used elements of that, but then I thought it might be fun to change the thistle to a pair of crossed hockey sticks. We also wanted the front to be subtle but for the back to scream ice hockey.

“To ensure the design felt and looked modern, the cake had to be perfectly smooth; we used ganache and a high-quality sugar paste to achieve this, with the tartan added by means of an edible printing technique. We made the hockey sticks by hand. The couple requested Victoria sponge, lemon and red velvet as their flavours, with two tiers of the red velvet so they could have one to enjoy all to themselves after the wedding!”

“This navy ruffle and lustre wedding cake absolutely blew me away once it was done. The couple in question both wanted a cake for their wedding at Ingliston Country Club that was a little bit different, and at this point the idea of navy ruffles came up. From there I was 100% all in! Ruffles are one of my absolute favourite things to do in decorating – they are paper-thin and take forever, but with navy being such an unusual shade for a cake, I just knew it was going to be stunning.

“Teamed with a crisp white lustre and a Prussian-blue textured tier, they then settled on a mixture of sugar ranunculus, Avalanche roses, thistles, eucalyptus and various other forms of greenery to sit on top of the cake.”

“In July 2018 we were contacted by a bride who was planning to marry at Edinburgh’s beautiful Signet Library. During the consultation, she mentioned that she was interested in having Highland cows as part of her cake design, alongside a more traditional white bake, and the lovely feedback from that particular wedding inspired us to introduce Morag and Hamish into our regular cake range.

“A more recent couple, who wanted something non-traditional for their fun and relaxed wedding at South Queensferry’s Orocco Pier, fell in love with Morag and Hamish, and wanted to have them on their special day as well – the bride absolutely loved Highland cows, so she’d definitely come to the right place!

“The pair wanted to stamp their own personality on the design so we added the golf clubs, as the sport is one of their favourite pastimes, and the fuchsia flowers were picked by the bride as that’s her favourite colour.”