Know which month you’d like to jet off? Here’s a year’s worth of inspiration, from sun-soaked winter escapes to cool summer breaks in Europe 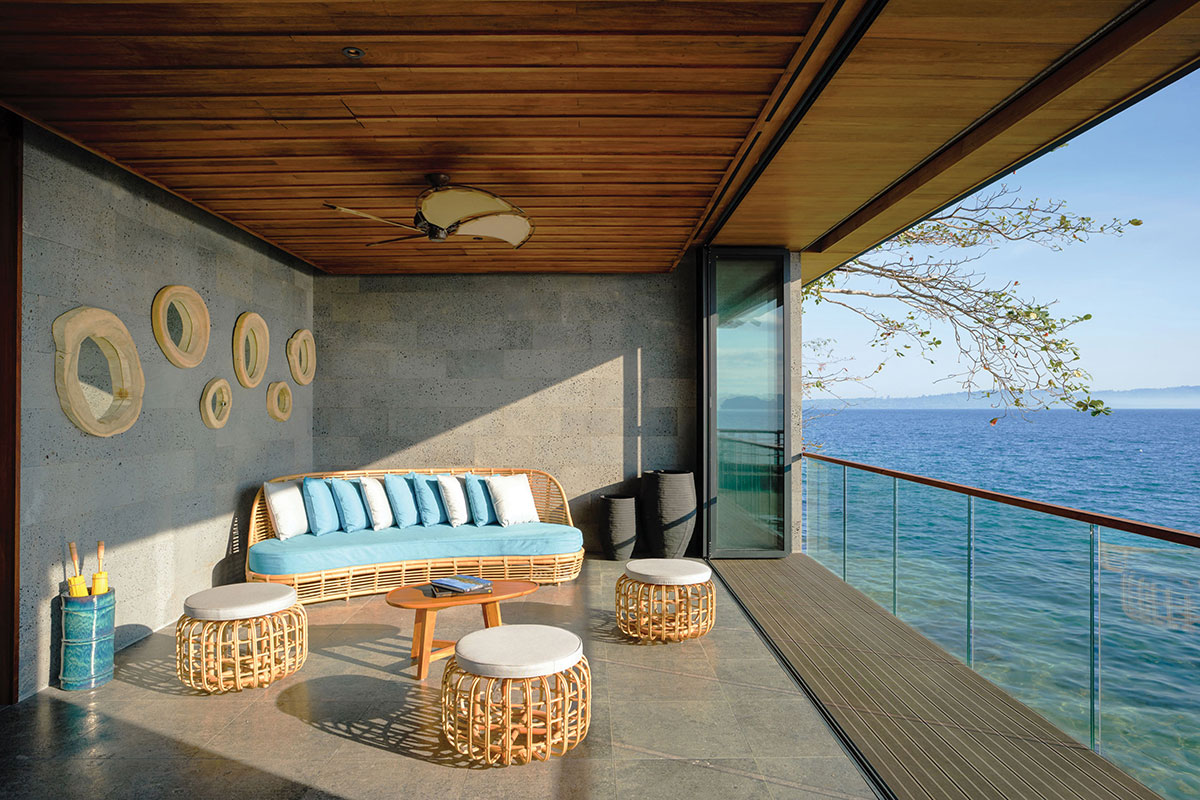 While Cambodia isn’t exactly lacking when it comes to year-round sunshine, January is the driest month for the south-east Asian nation, with a comfortable average temperature of 26°C. Stay at the brand-new Six Senses Krabey Island, which only opened in March this year, and use a luxe pool villa as a base to explore the private island, and go snorkelling in the jewel-toned waters of the Gulf of Thailand.

If wedmin has worn you out, there’s also the Six Senses spa, where you can re-centre with ancient Cambodian healing traditions. Rates start at £412 per night in a Hideaway Pool Villa Suite on a B&B basis. 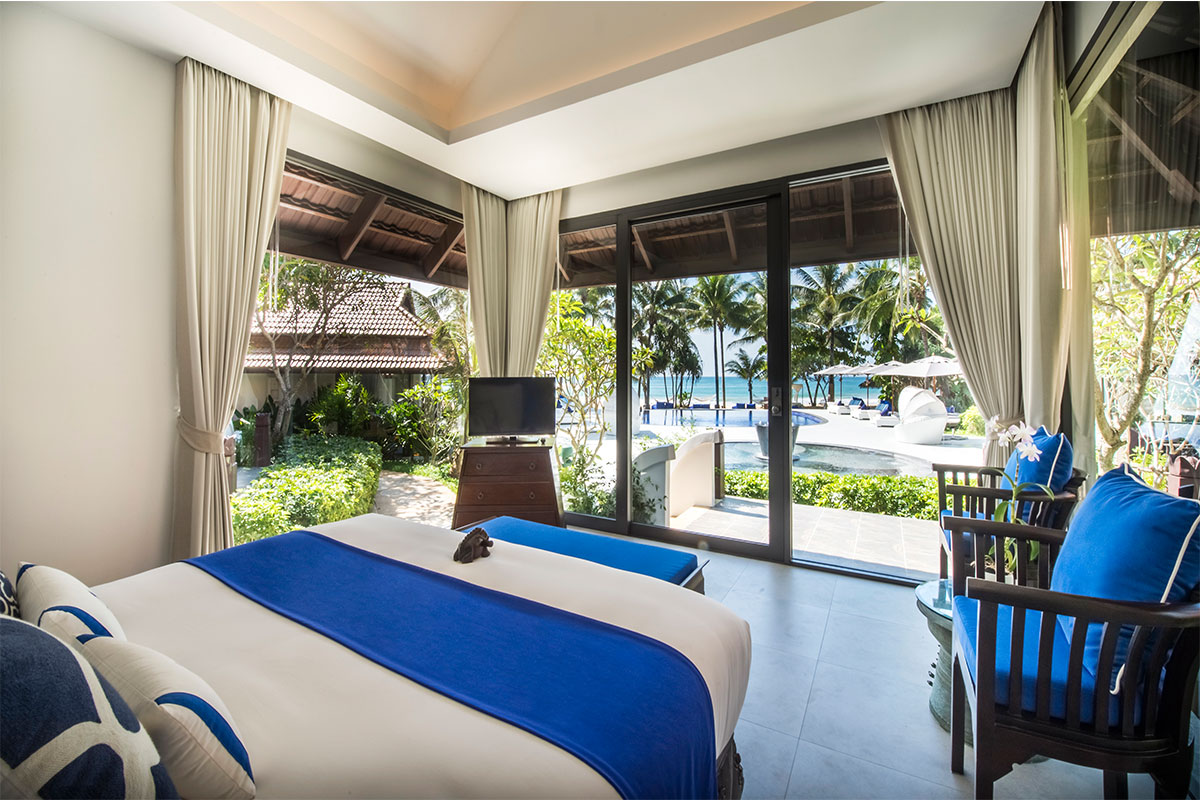 In February, it has to be Thailand. The rain has more or less passed, the heat isn’t as intense, and if you head to the west coast, you’ll find the sea a crystal-clear snorkeller’s haven at this time of year. Book with Barrhead Travel, who’ll fly you out to five-star Akyra Tas Sukhumvit in Bangkok for four nights (business class, no less), before you move on to another five-star resort, Tamarind Village in Chiang Mai, for three more nights, where a fascinating temple tour awaits.

And finally, for the remaining seven nights of the two-week itinerary, you’ll rest and rejuvenate at Phuket’s blissful Akyra Beach Club. Plus, you can keep your eco conscience clear, as the Akyra group has gone totally single-use plastic free, across all of their properties. From £3,297pp, including private transfers, return and internal flights. 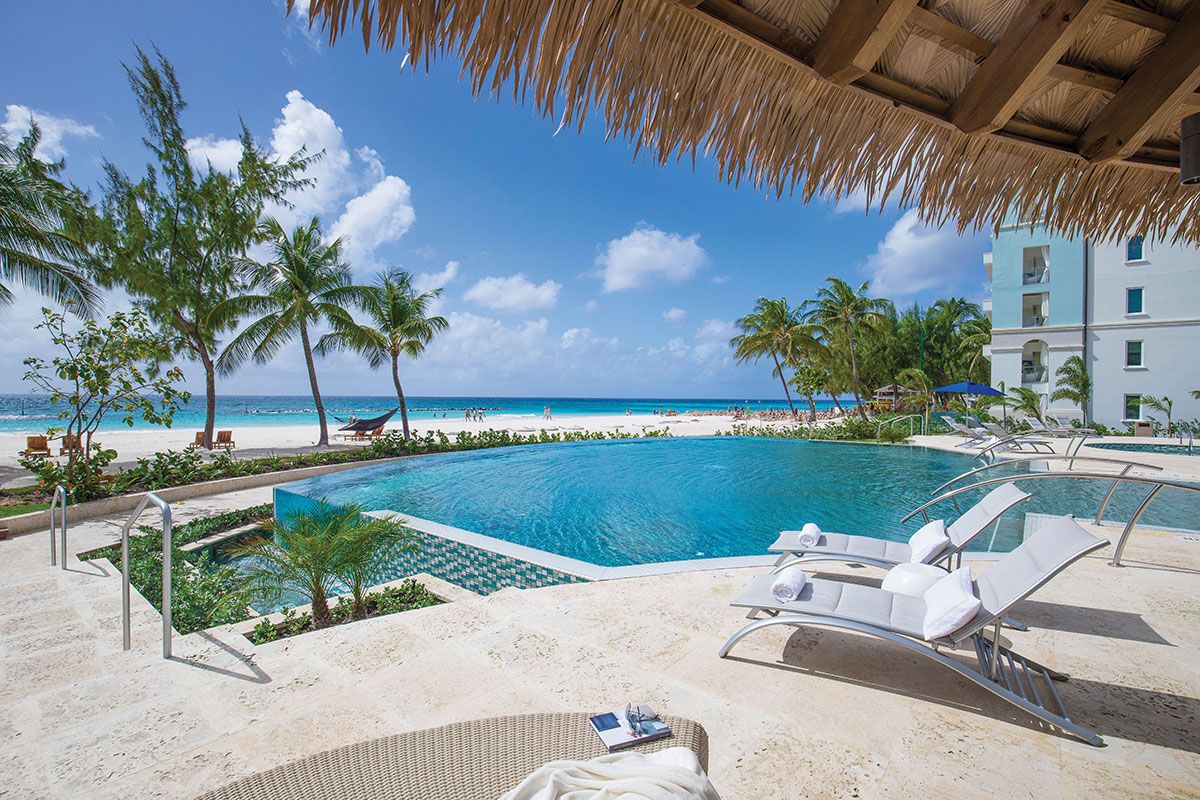 Dry season in the Caribbean falls between November and March, so these months are your best bet if you’re intrigued by the likes of Barbados – and with its icing sugar-white sands and azure stretches of ocean, who wouldn’t be? 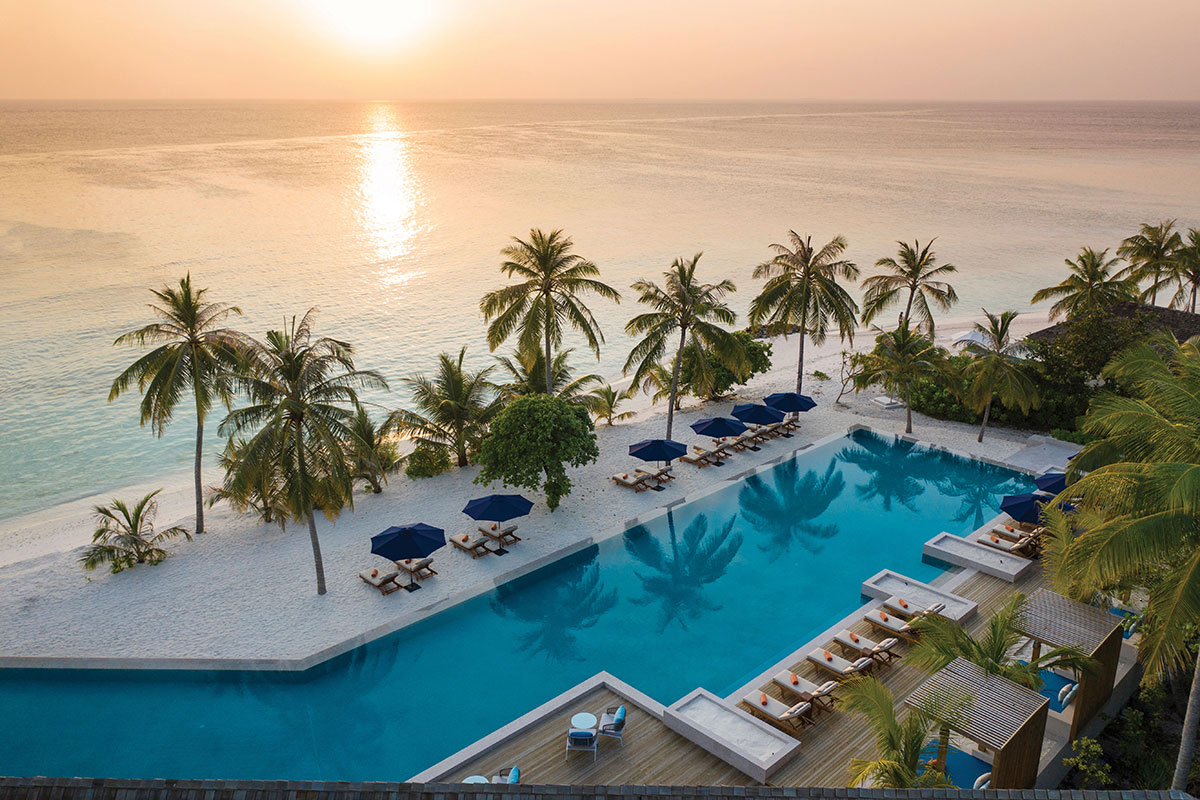 Is there ever a bad time to visit the Maldives? Probably not. But there is a prime time. “The peak season is between November and April, when it’s hot and dry,” explains Sheena Paton of travel specialists Kuoni.

“It’s perfect for jetting off to the sunshine straight after a winter or spring wedding. There’s more rain from May to July.” As a powerful magnet for honeymooners, these islands are teeming with resorts – how to choose?

“We’d recommend Kuramathi, Kandolu or our new resort Faarufushi. Less is more on this small coral island, which combines chic modern design with a wonderfully unspoilt setting,” Sheena advises. If getting away from it all is the goal, you can’t get much more remote than the Raa Atoll resort, reached only by speedboat. From £4,149pp for seven nights half board, including flights. 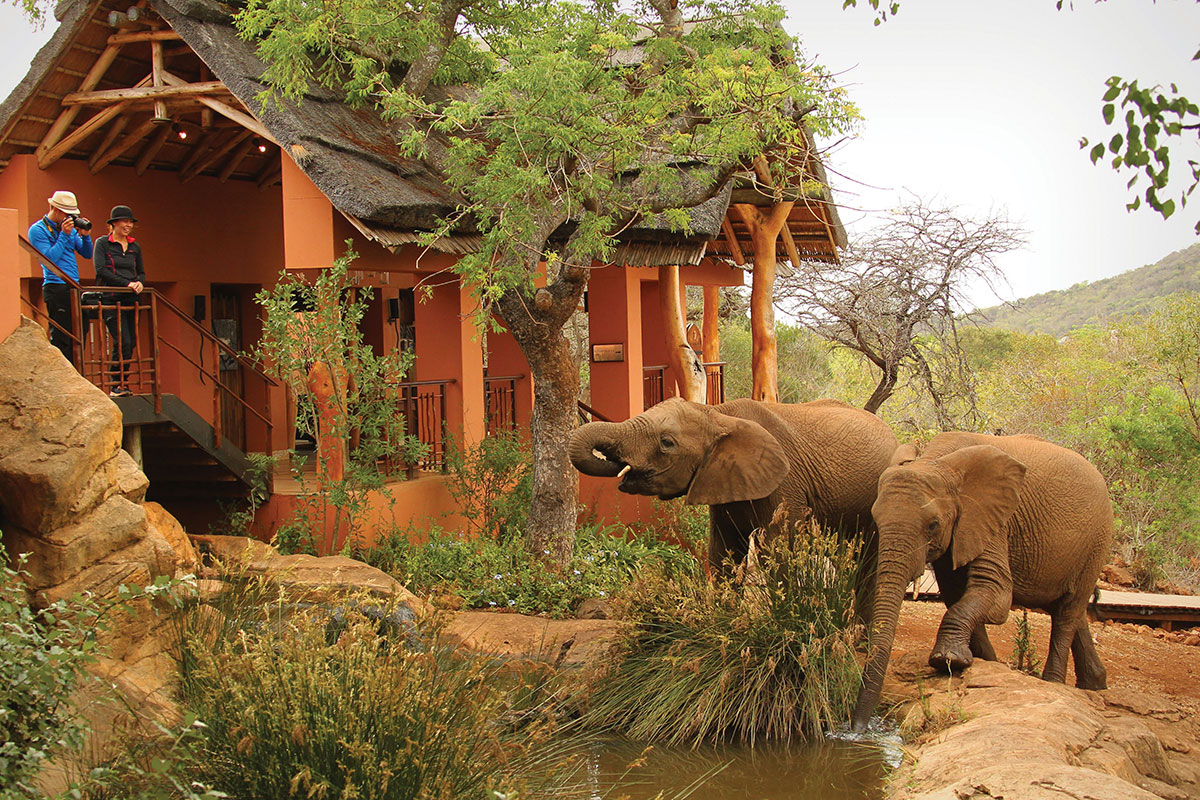 If you’re smart about when you travel, you can really reap the benefits. Think outside the box. “Summer in the northern hemisphere is winter in South Africa and, thus, low season,” points out Thanda Safari’s Briarley Bekker.

“However, this is the ideal time to visit as winters are dry and sunny with temperatures hovering around a pleasant 20°C. The dry season is also considered the best time for game viewing, with fewer leaves on the trees, making wildlife easier to spot.”

Not only are stays 20% cheaper in winter, but during the month of May, the five-star resort offers an additional 25% saving of four nights for the price of three (typically around £1,328). Plus, you can now fly direct to Durban with British Airways. What are you waiting for? 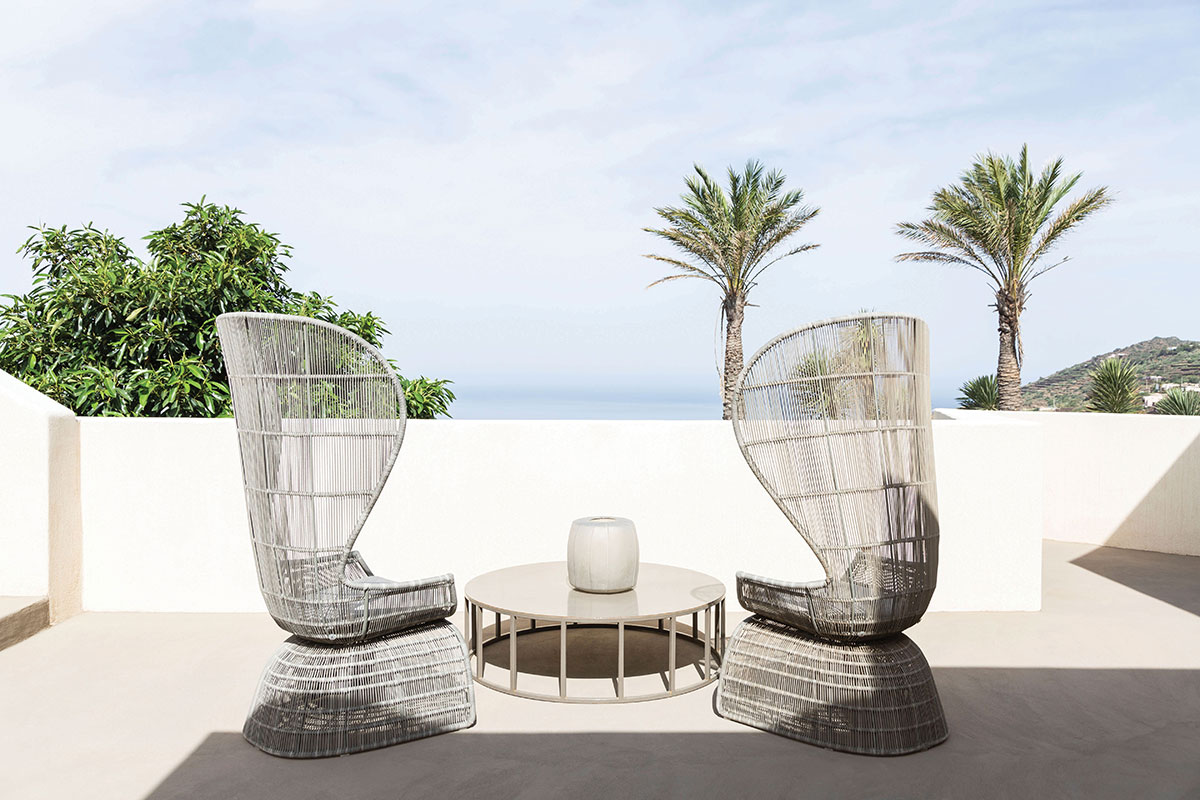 From June onwards, the Mediterranean comes into its own, basking in a steady (but not sweltering) heat. The challenge is finding a destination a little off the beaten track in such a popular part of the world. Sikelia Pantelleria is based on the largely untouched volcanic island of Pantelleria, which sits midway between Sicily and the coast of Tunisia (on clear days you can spot the North African country in the distance).

Comprising stylish suites tucked away in ancient ‘dammusi’ dwellings, the boutique hotel and former private residence has striking monastic architecture and an unusual Arabic garden to lure you in, with an awe-inspiring, rugged location to boot.

The peace and quiet of this Italian hideaway is hard to beat, but it’s the hotel’s holistic approach to wellbeing that’ll help you reach a higher plane of relaxation: enjoy expert massages, for instance, outside in the garden. From around £476 per night. 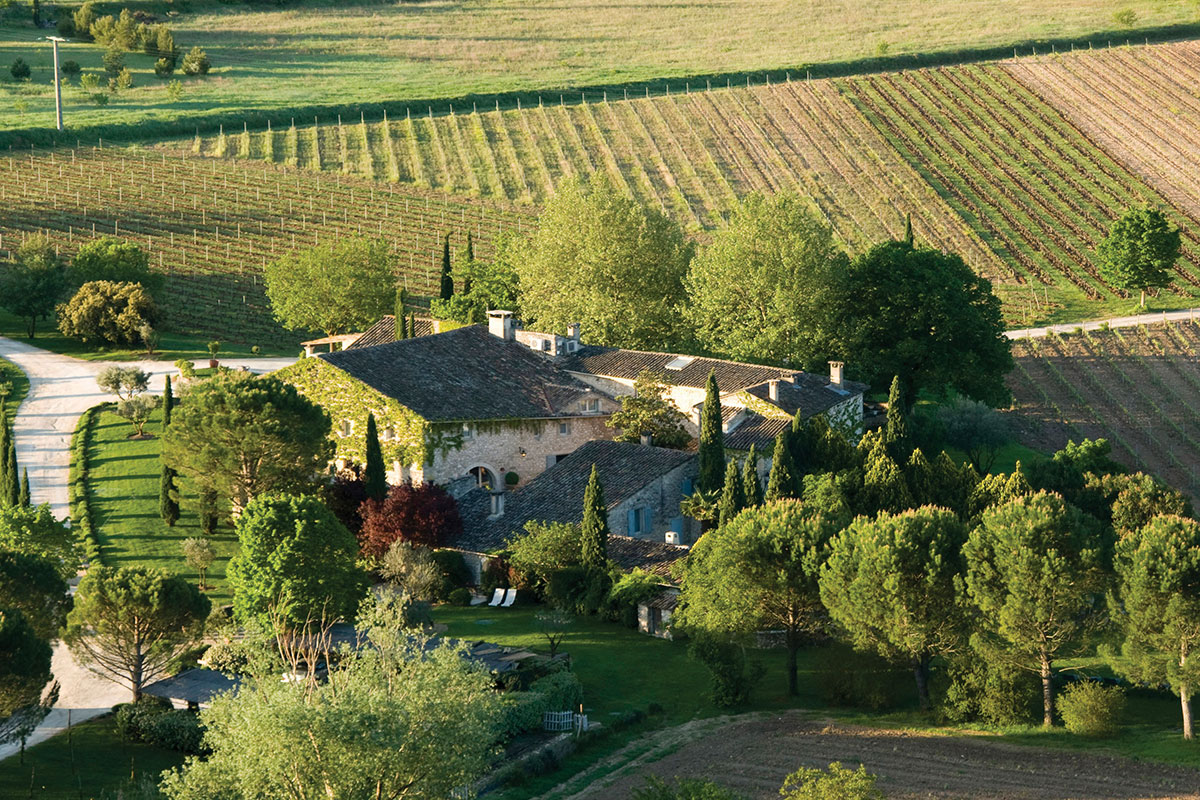 Why July? Well, for a start, the spectacular lavender fields for which this French region is famous for are in full bloom, just before the buds are harvested in August. As for where to stay, La Bastide de Marie, a restored 18th-century farmhouse, is like stepping into an Impressionist painting.

The estate is surrounded by 20 hectares of vineyards and gardens in the heart of the Luberon Natural Park so, as you can imagine, the menu is exceptional. The house chef works carefully to produce seasonal dishes, using riches from the region and ingredients sourced from local markets and serves up tipples from the on-site winery.

The hotel is also home to the Pure Altitude Spa and a bohemian roulotte, where you can stay overnight. From £285 per night. 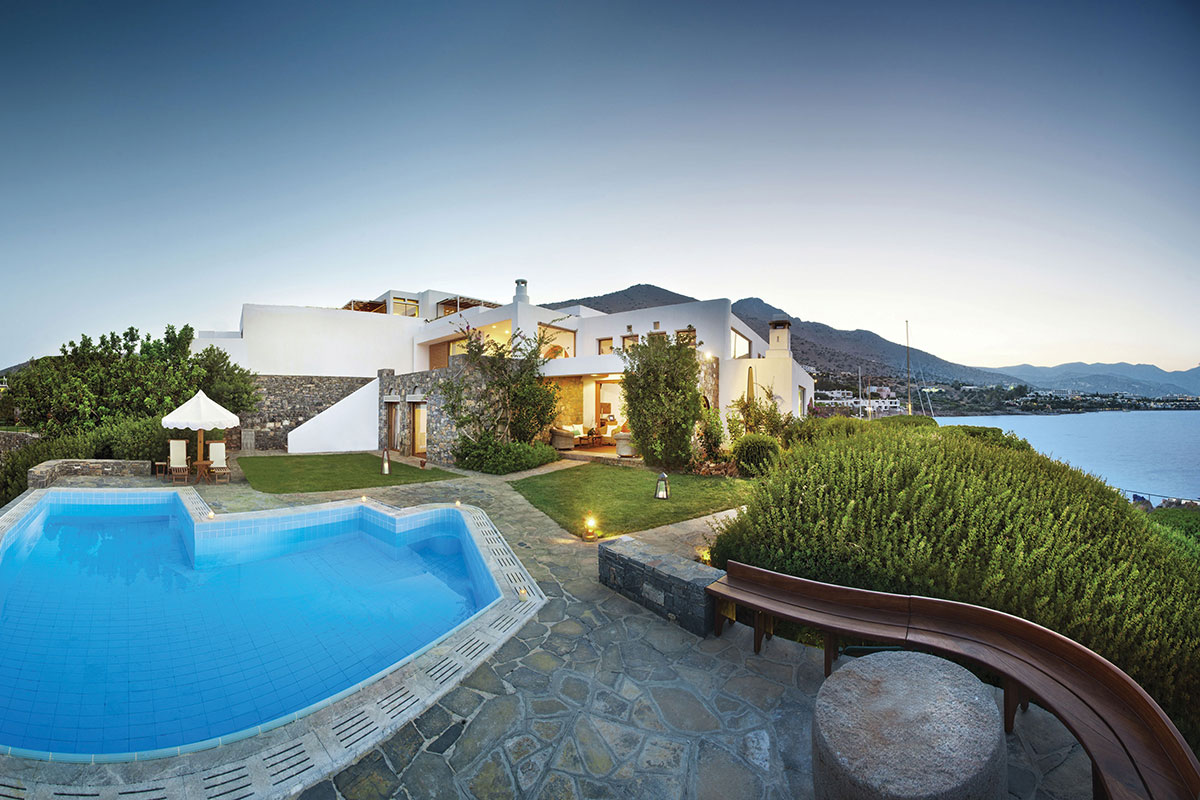 By late summer, Greece’s largest island is experiencing its hottest months of the year, with average toasty highs of 29°C, even reaching a stifling 40°C if the sirocco, a hot wind direct from the Sahara, is blowing.

Sun-worshipper? This is the place to go. You’re spoilt for choice when it comes to resorts but we’re feeling the family-owned Elounda Peninsula, which hosts the award-winning Six Senses Spa and offers glorious views across the Aegean Sea and Sitia mountains.

The hotel is well equipped for honeymoon pampering, with its own private beach, indoor and outdoor pool, sauna and hydro-massage room, and, this year, it collaborated with the respected Wimberly Interiors to build two ‘Diamond Residences’, self-contained villas with private terraces and their own heated pools. From £552 per night B&B for a Peninsula Collection Suite. 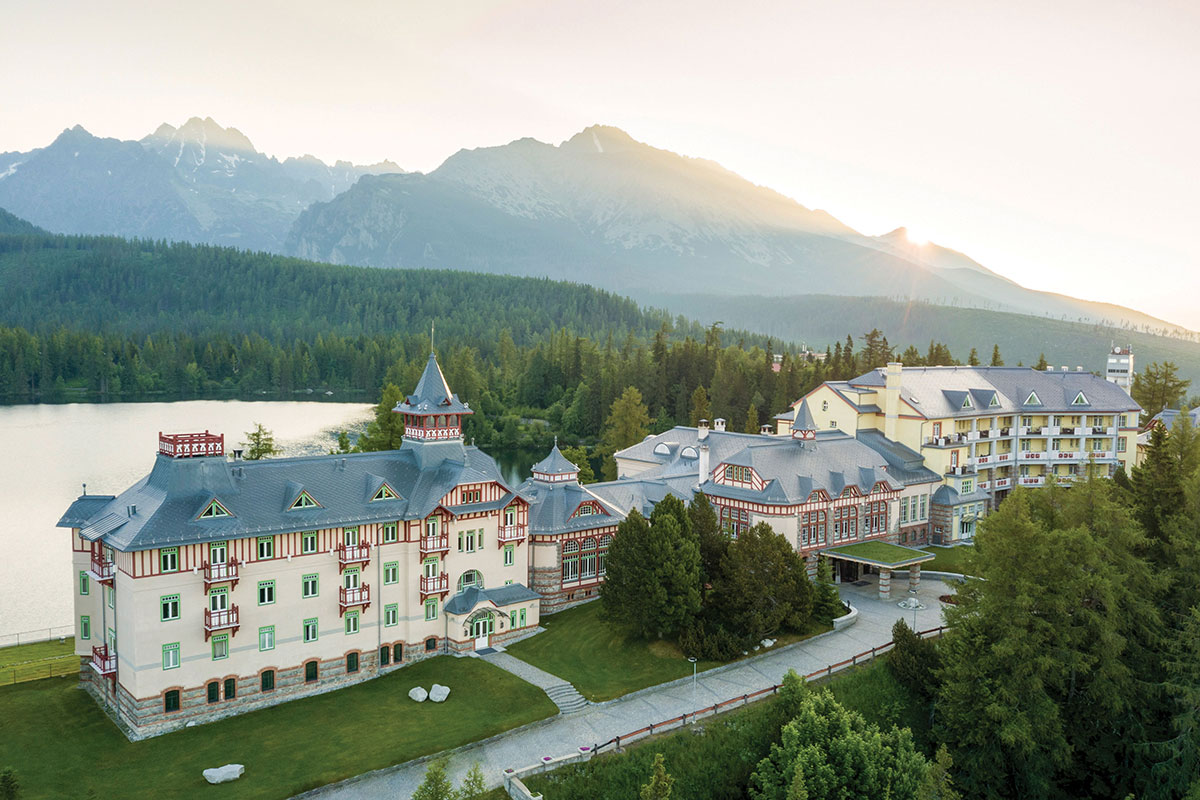 Not one to follow the crowd? We’ve developed an all-consuming obsession with the unconventional idea of a Slovakian honeymoon, thanks to the fairytale-esque Grand Hotel Kempinski High Tatras. Just look at that scenery!

“Any time of year is incredible, but autumn in the mountains is stunning, with the trees changing colour and lots of sunny days,” claims the hotel’s Alena Spisiakova. “Our signature suite has a jacuzzi on the rooftop with 360-degree views of the glacial lake and the peaks, which are even more dramatic in this period.” Breathtaking. From £1,059 per night. 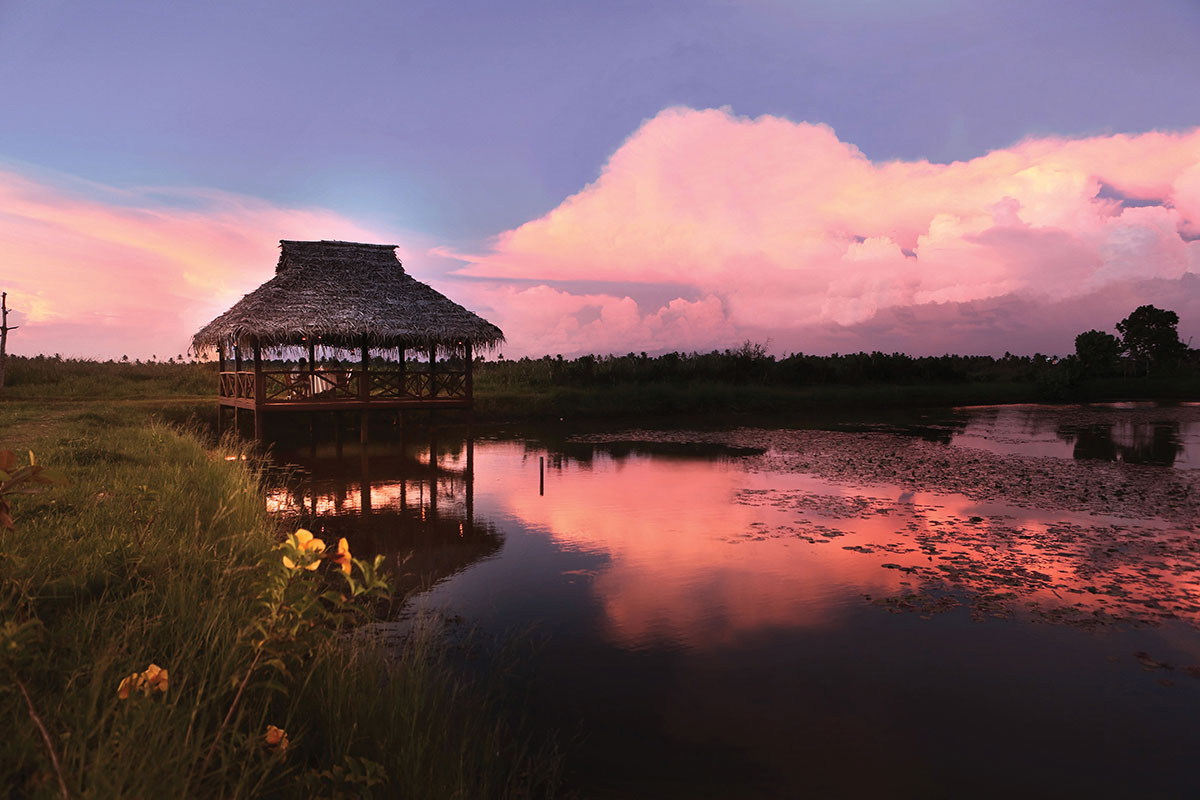 India will forever be a bucket-list destination no matter the season, but to completely take advantage of the country, a little inside knowledge goes a long way. “December and January are very busy, with high travel prices and bustling crowds,” warns Sally Thomas of Authentic India Tours.

“And June and July are at the peak of monsoon season. Consider heading to Kalpathy in Kerala for Diwali, October’s great Festival of Light. There, you’ll see huge traditional temple chariots being driven through the streets. Or, for the ultimate Keralan experience, cruise the tranquil backwaters on a fully crewed private houseboat, with your own personal chef.”

If honing in on such a specific place and experience blows your mind, this is where Authentic India Tours excels, drafting bespoke honeymoon itineraries – you had a co-ordinator for your big day, why not your ’moon too?

November – Florida and the Caribbean 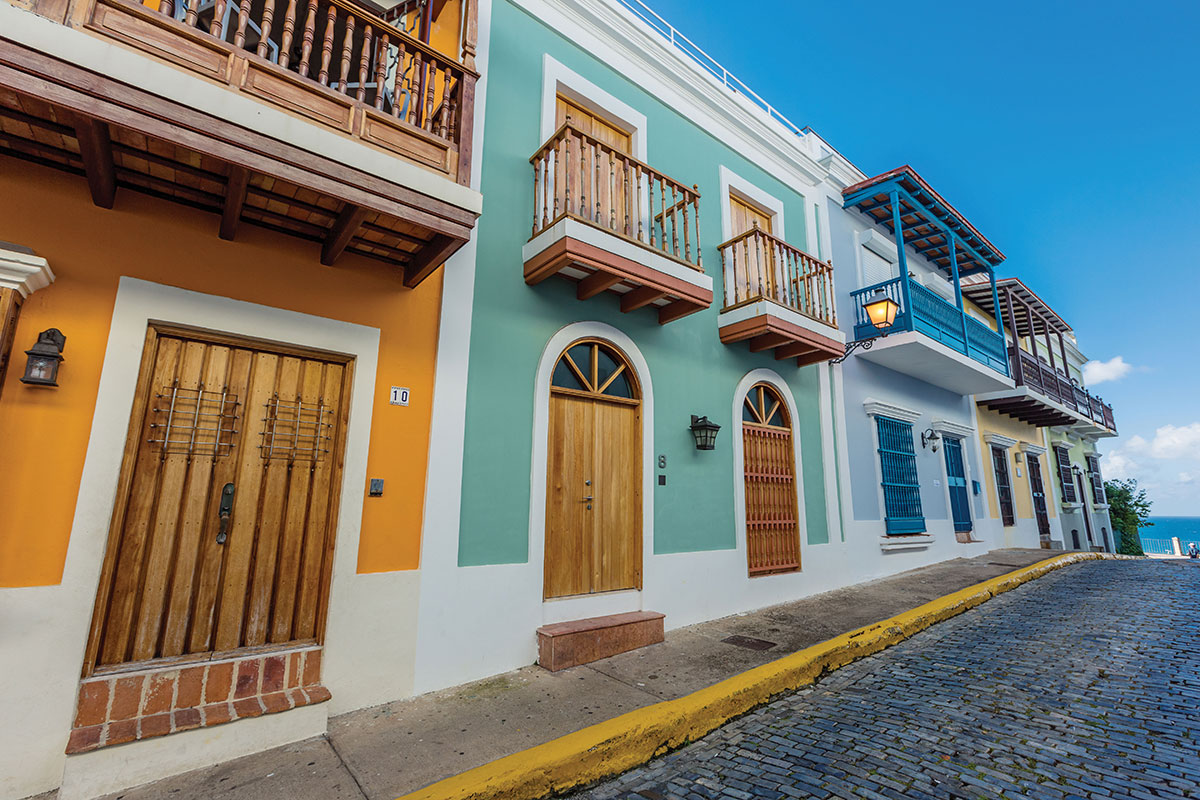 With hurricane season out of the way and a slightly cooler climate, November is the time to set sail around the Caribbean islands. Look to Barrhead Travel, who’ll hook you up with a leisurely seven-night stay in a three-bedroom deluxe home in Fort Myers, Florida (with car hire), before you travel on to Port Everglades and hop aboard the Celebrity Equinox for a further seven nights.

Your first port of call will be San Juan in Puerto Rico (below), where you can soak up the vibrant streets of the Old Town district and visit its massive forts. The next day, you’ll wake up in Charlotte Amalie, the capital of the US Virgin Islands (make sure you have your camera to hand for the heavenly Magens Bay), before moving on to Tortola in the British Virgin Islands, the home of the infamous Smuggler’s Cove and, lastly, Nassau in the Bahamas. From £2,159 for an inside cabin. 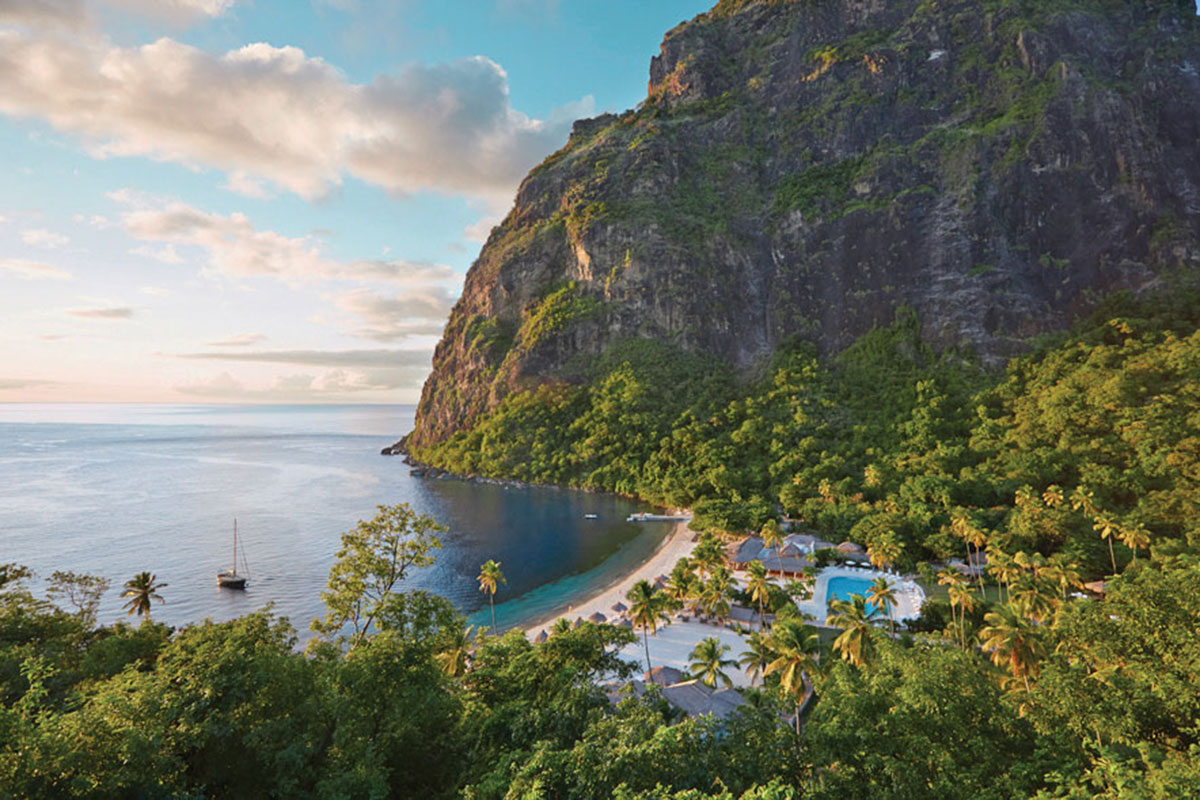 Saint Lucia feels like a relic from the Jurassic era, thanks to its lush vegetation, fine white sands and towering peaks, the UNESCO World Heritage-listed Pitons. Jump right into that postcard, sandwiching yourself between the volcanic spires at Sugar Beach.

“The first-class rooms, villas, beach bungalows and residences are decorated in a classic colonial style, with private plunge pools [every room has one] and butler service,” says Kuoni’s Sheena. Need more encouragement? We’re guessing no, but here goes: the resort is set in over 100 acres of rainforest on the site of an 18th-century sugar plantation, and the spa is spread across seven treehouse treatment rooms.

Tear yourself away from that beach, and try out the earthen steam dome, or temascal, which harks back to the healing practices of the island’s earliest settlers. Seven nights from £2,649pp, including flights. www.kuoni.co.uk

Focusing on family and floristry at Balbirnie House

Four fabulous spots to honeymoon in the UK and Ireland

2020 is the year of the ‘wellness honeymoon’

Celebrate your big day in the sun with Sandals

Do you know what vaccines you’ll need for your honeymoon?

Sack sitting on the beach! Use your honeymoon to start on your bucket list