After a successful inauguration last year, even more suppliers were clambering to get their hands on a Scottish Confetti Wedding Award this time round. Judging for the awards remained at the same high standard, with taste tests, mystery shopping and independent judges hitting the road to whittle down 1,000 competitors to just 155 finalists.

On 29th January, the TTKS team headed to the Hilton Glasgow to get all the gossip from this glitzy industry bash. Hosted by Capital FM’s Des Clarke, who kicked things off by touting for freebies for his upcoming wedding from the assembled suppliers, the awards celebrated the leading names in our country’s thriving bridal community.

Over 80,000 votes were cast – a massive increase on 2016’s 10,000 with a honeymoon giveaway to Mexico’s Hard Rock Hotel in Riviera Maya to tempt voters. The Barrhead Travel prize was snapped up by lucky winners Cheryl and James, who’ll be flying out for seven nights after their big day. 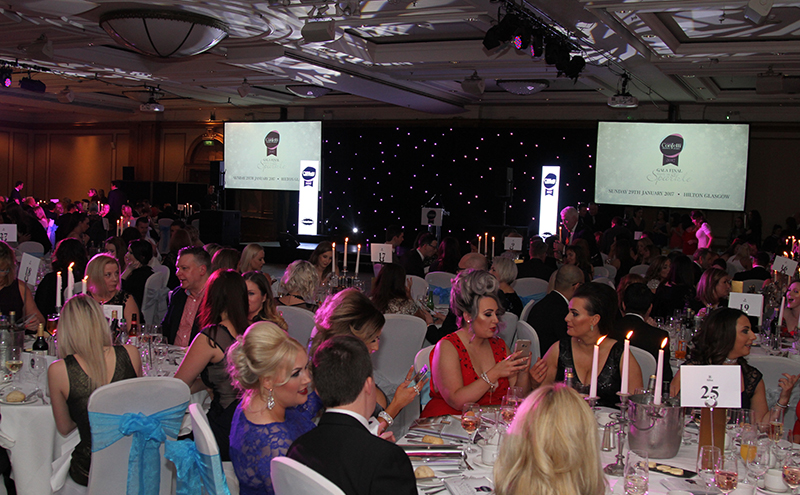 Of all the gongs up for grabs, the Cake Designer and Retailer of the Year was most anticipated by the team, as our online editor Sarah had the honour of presenting the trophy! She crowned A-Cakes, who joined the other winners in taking home a trophy and a bag of treats from sponsor Fake Bake.

Once the formalities were out the way, a host of acts from F3 Entertainment’s stable filled the dancefloor. Feeva ran through Motown’s greatest hits, but our personal fave was Sugahoneyz, who time-hopped through 20 years of the most iconic girl bands. Same time next year then?

Florist of the year: All About Flowers (Runners up: Trudi Todd Flowers and The Floral Design Boutique)

Men’s outfitter of the year: Kilts 4 U

Wedding show of the year: Wedding Exhibition at Braehead Arena

Wedding ring supplier of the year: Laings of Glasgow

Photographer of the year: Story of Love – Wedding Photography by Natalie Martin (Runners up: Julie Lamont Photography and KK Snaps)

Venue accessory supplier of the year: Razzmatazz Occasions (Runners up: Fancy That Too and Pretty White Weddings & Events)

Stationery supplier of the year: Caledonian Cowgirl (Runners up: One of a Kind Stationery and Bottled Love)

Hairdresser of the year: The Aisle – Bridal Hair & Make-up (Runners up: The Hair Boutique Renfrew and Pin Up Hair)

Award for most desirable wedding venue of the year (package of £6,000 or less): Gean House (Runners up: Burnhouse Manor and Crowwood House Hotel)

Award for most desirable wedding venue of the year (package over £6,000): Mercure Peebles Barony Castle Hotel (Runners up: Portavadie and Grand Central Hotel)

Our fabulous 50th issue is out now!

Despite the pandemic, this couple managed to marry at Loch Lomond on the 25th anniversary of their first date

Do it your selfie: makeup artists trial bridal looks on their own gorgeous faces

Happy Father's Day to all the dashing dads, gorgeo

Know anyone who'd slay in this suave salmon suit f

A Pride engagement, a Halloween-themed ceremony at

Looking for a gown that doesn't cost the earth –

✨🌟Jewellery that's out of this world 💫🤩

🌈 Be proud of who you are no matter who you lov

The pandemic threw all sorts of challenges at our

"I was thrilled that they both fitted like a glove

When two interior designers get married, you just

✨ Make sorting your wedding cake a piece of cake

Cute or what? @westcoastalpacas are now to be foun