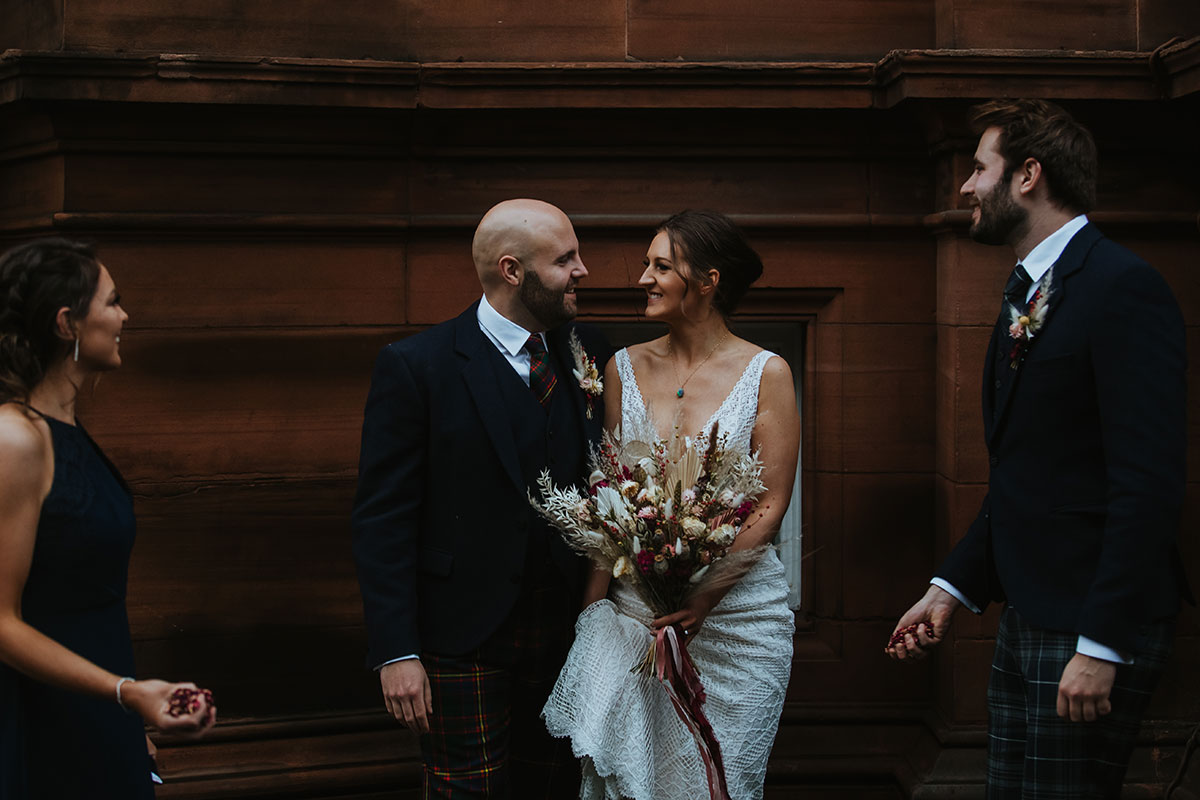 “After four years together, Jamie popped the question on 26th January 2020 in the grounds of Rosslyn Chapel in Midlothian. My grandparents were married at the chapel 57 years prior, so that made the setting all the more perfect.

We had a lovely experience with jeweller Sheila Fleet. Jamie used a replica ring to propose, so after the engagement, we travelled to the Kirk Gallery in Orkney to see my actual ring being finished in the company’s workshop.

Like so many other couples, the Covid-19 pandemic hugely affected our plans. We initially planned to have 150 guests at a big summer wedding at Balfreish Barns in the Highlands, where Jamie is from. We liked its blank-canvas style and Isabelle, the owner, was so friendly and helpful in the initial stages of planning.

When it became clear that our plans were unlikely to materialise any time soon, we decided to marry closer to home and bring the date forward; we realised that being together was ultimately what mattered to us the most.

We set about planning a much smaller wedding in Edinburgh, giving ourselves 12 weeks and a guest list of 17 to play with (which was within the total of 20 allowed in the restrictions at that time). The announcement by the Scottish Government just before Christmas, reducing numbers to just two witnesses left us devastated, but what could we do? We stuck together, focussed on why we were getting married in the first place and decided to proceed.

We had four(!!) different venue bookings cancel owing to complete shutdown over lockdown. We eventually came across the Pompadour Suite at the Waldorf Astoria Edinburgh. We wanted a space that didn’t feel empty or highlighted our lack of guests and this was it. We can’t thank the team at the hotel enough for pulling out all the stops.

It was just us and our two witnesses – best man Calum and maid of honour Ailsa – for the humanist ceremony. Our celebrant Tim Maguire was excellent and gave us complete control over the content; we ended up with a ceremony that was personal and meaningful.

During the ceremony, we lit 15 tea-light candles to signify the people who were supposed to be with us (they were lily of the valley which is my grandmother’s signature scent). We  honoured our absent families in myriad other ways: we ‘tied the knot’ with a scarf that had been gifted from one of Jamie’s grandmothers to the other; I borrowed an opal necklace that my mum had worn on her wedding; and Jamie wore his grandfather’s tartan trews which had been handed down through the family.

We sent packages of champagne and favours to the 15 other people who should have been with us. Lots of people still wore their wedding outfits and toasted us as they watched our ceremony live stream. People made an event of it even though they weren’t physically in attendance – we felt really touched by their efforts.

The day before the wedding, Dean from Pinnacle Films (also responsible for our live stream set up) came to my grandparents’ street and filmed me with my family ‘leaving’ their home. Grandad – who had been lined up to give me away – was waiting to help me into the car. Dean made the footage into a fantastic short feature film which was played on a YouTube link prior to the live stream of the ceremony. So many people genuinely thought I had been with my family despite it being filmed the day before!

As restrictions meant he couldn’t be present in the same room, Sam McYoung of Ezra Studios captured our ceremony on a long lens, socially distanced from an adjoining room. We wanted natural, relaxed photos that captured the little details of the day and he more than delivered.

Bothy Blooms created gorgeous, dried flower bouquets and buttonholes and sent them down from the Highlands ahead of the wedding (the Dingwall florist had been booked to do our initial barn wedding). Owner Elizabeth kept up with our ever-changing dates and demands and did the most wonderful job.

I got my dress from Bijoux Bridal in Hamilton. Alex at the boutique was amazing. She knew from my body language that despite liking others I wasn’t 100% happy until she pulled out ‘the one’.

Our ‘reception’ was tucking into takeaway pizza from our favourite food place, Civerinos, while dolled up in our wedding finery. Our ‘first dance’ to Ronan Keating’s Forever Ain’t Enough – blasted from an iPhone – was spontaneous and really magical.

We don’t plan to have a follow-up party. We considered it initially, but felt that the reason for throwing one wasn’t to please us, it was more to please others. Instead, we plan to have many little celebrations all over the country whenever we can!”

Top tip: “Just go for it. Remember why you are getting married and don’t do anything you feel pressured into or out of.” 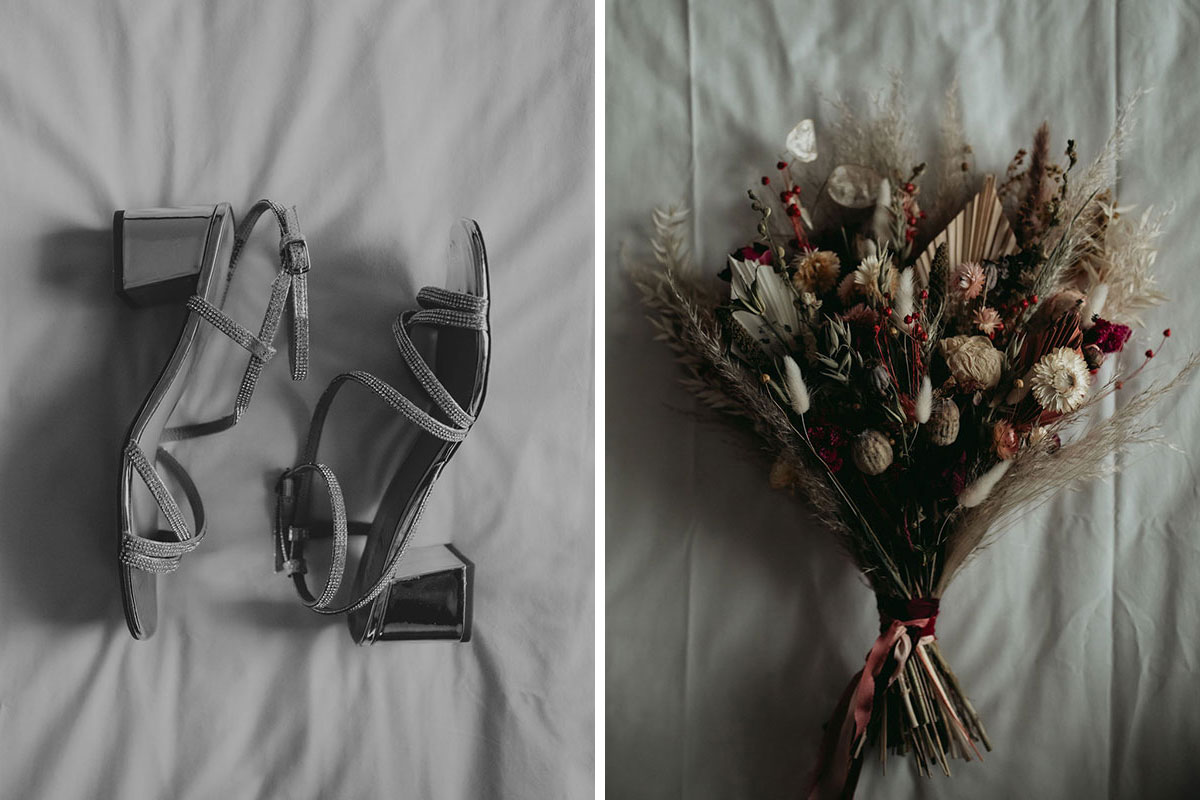 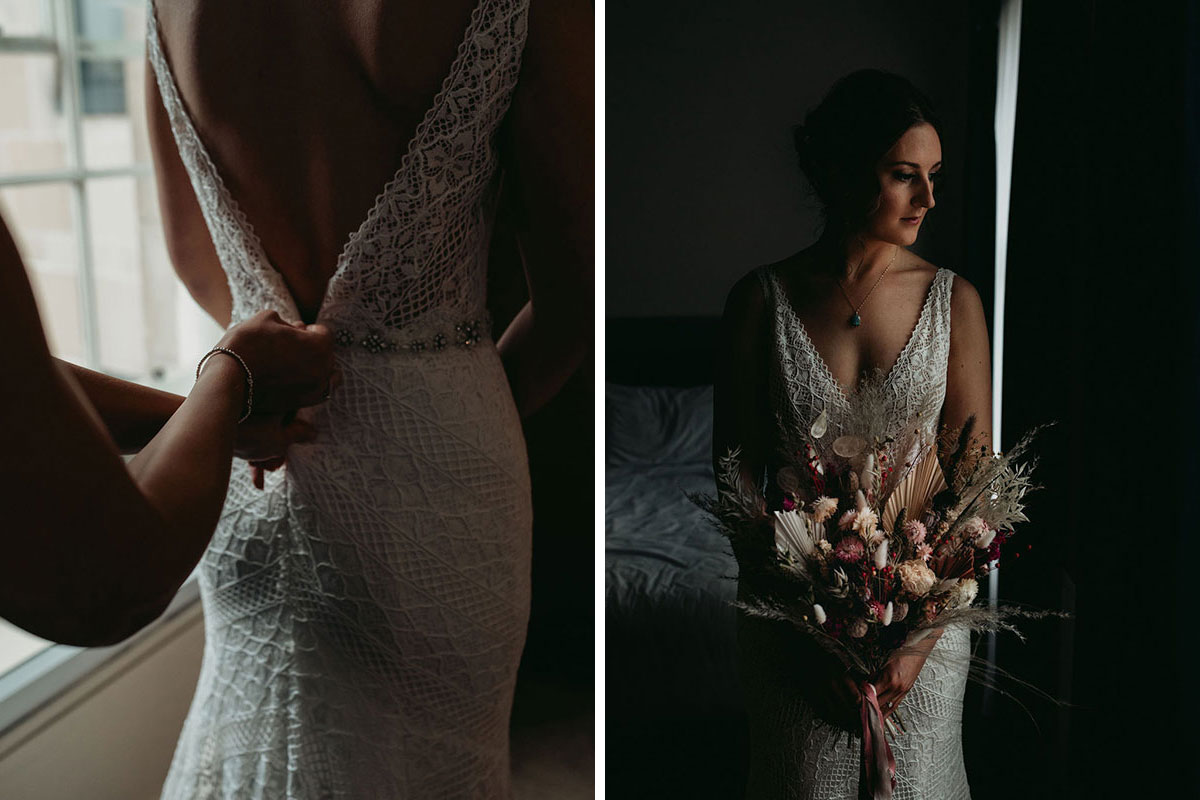 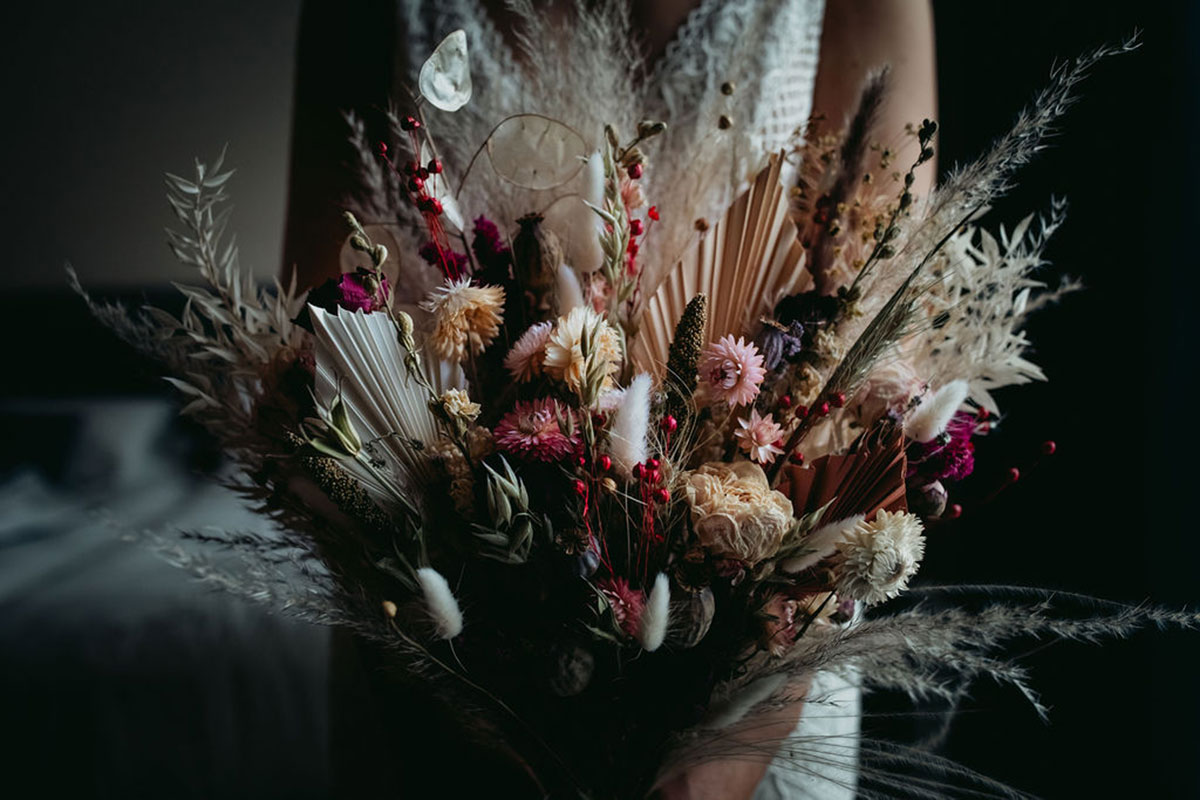 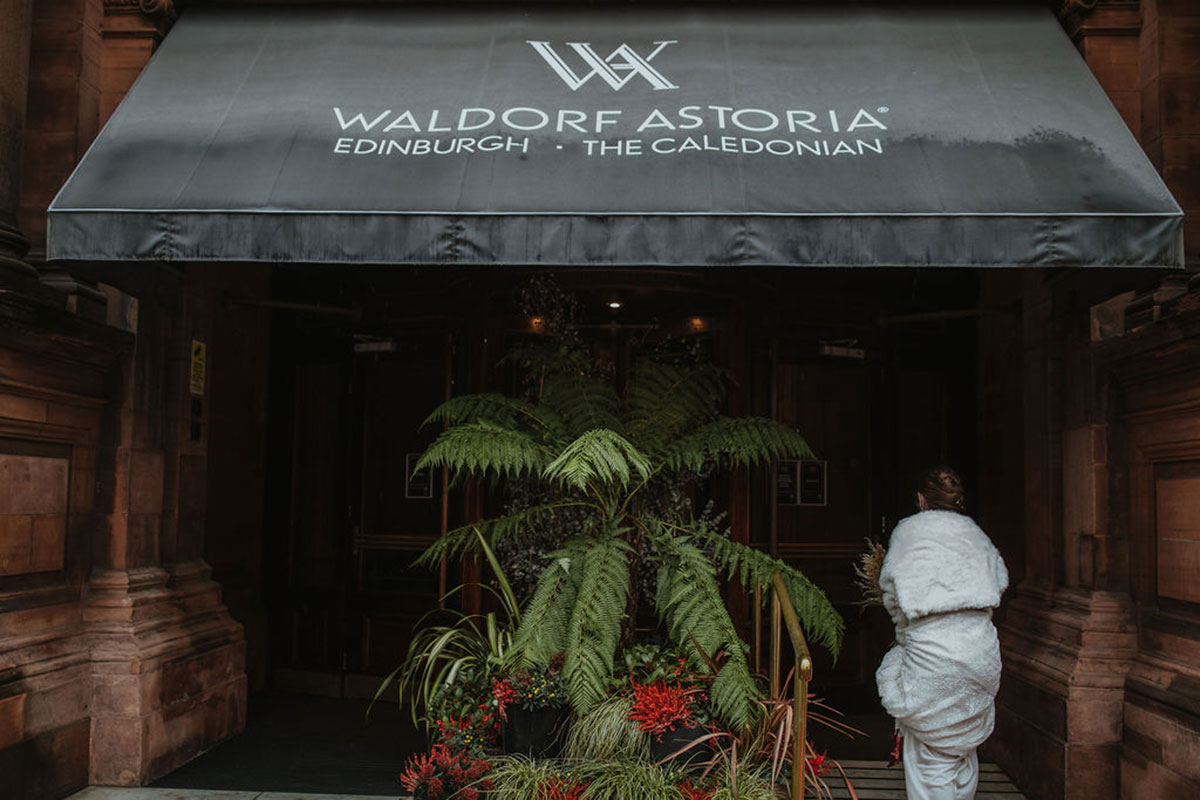 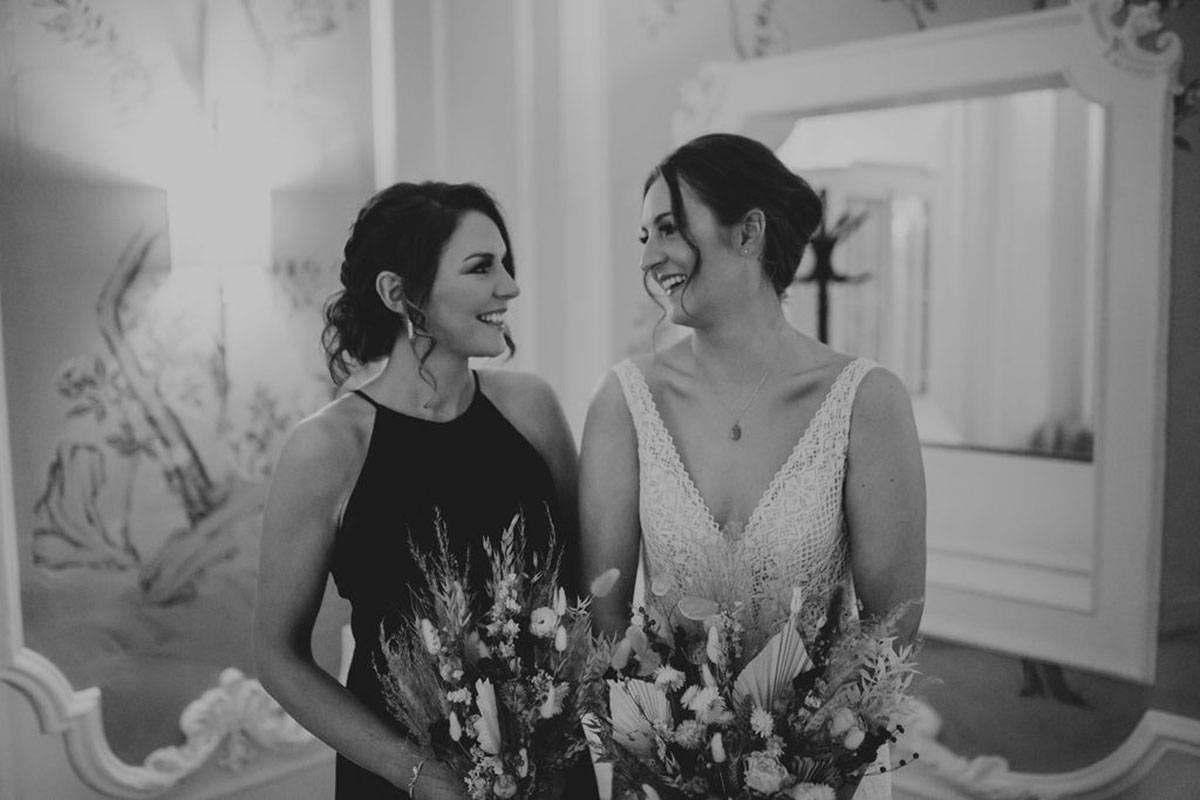 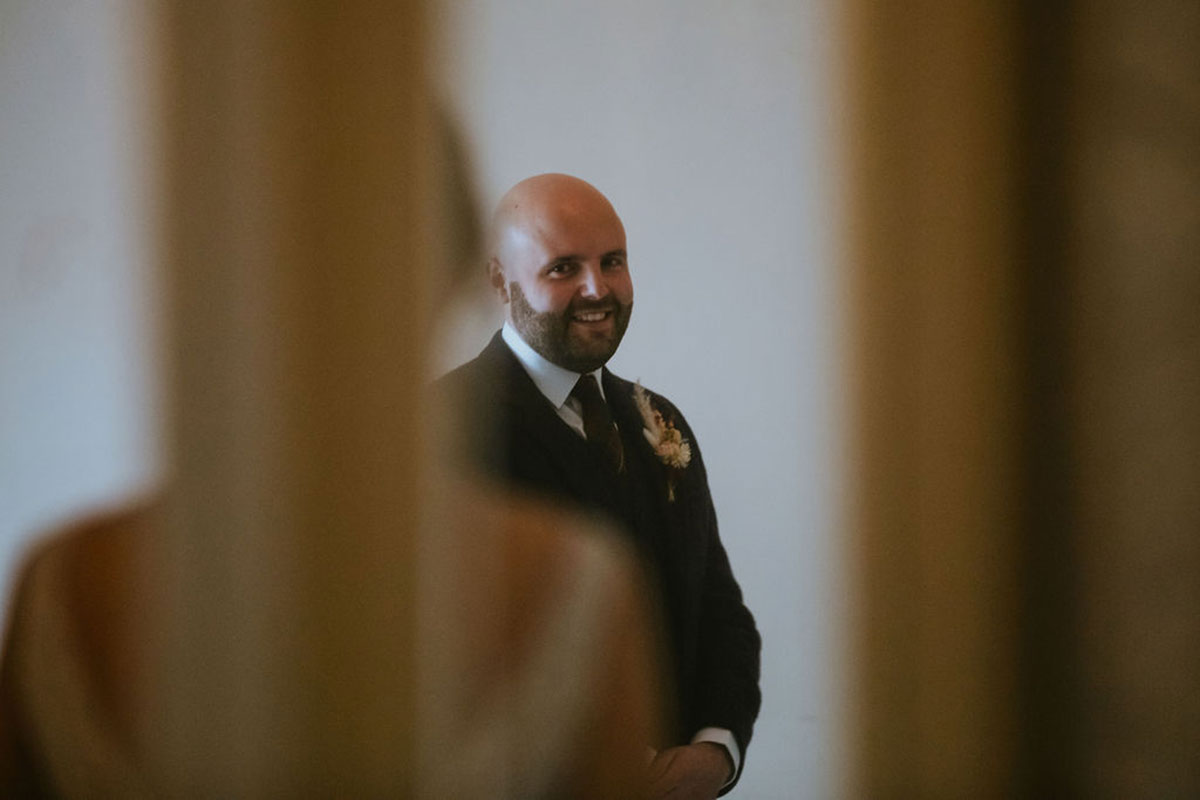 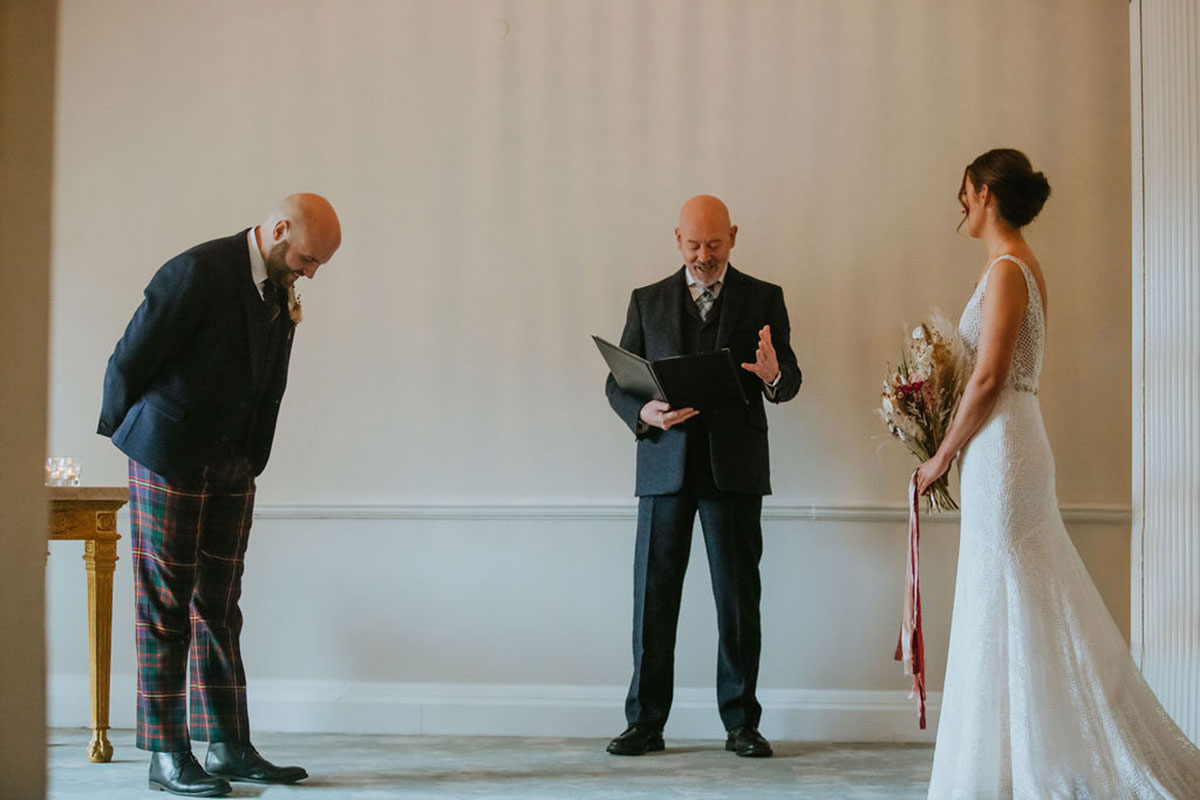 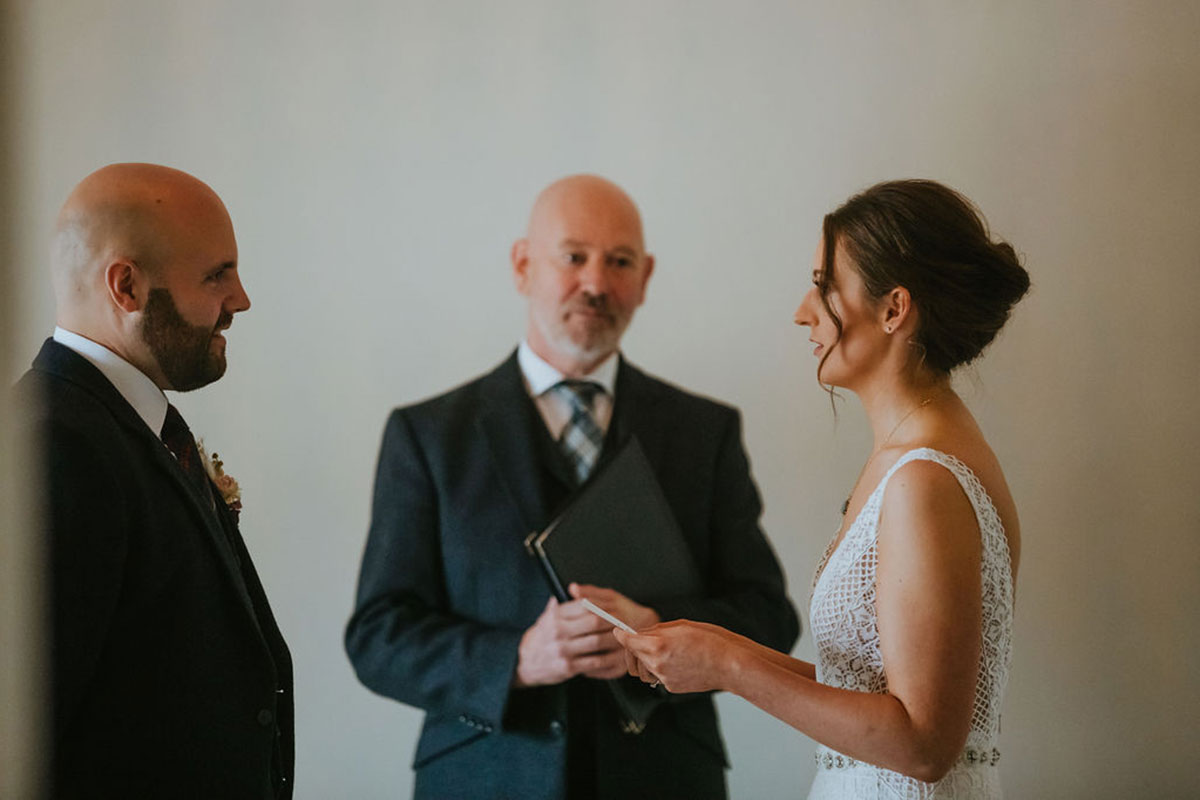 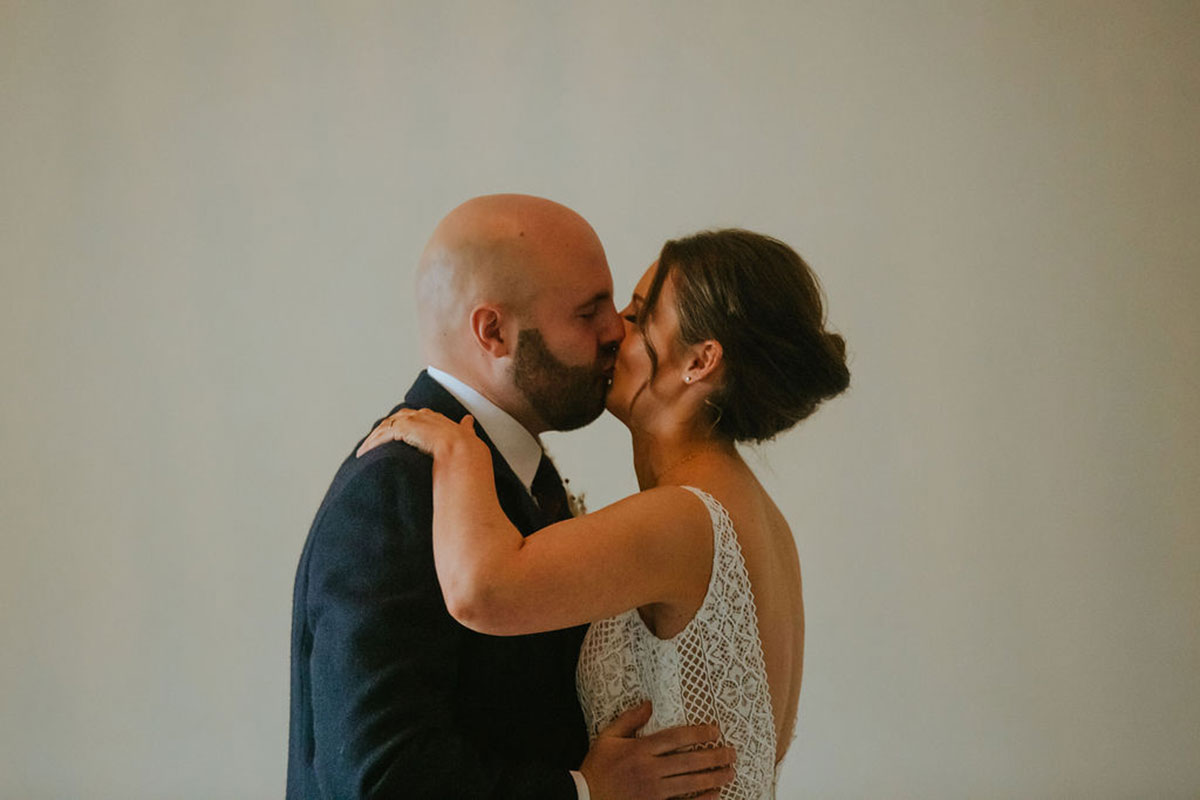 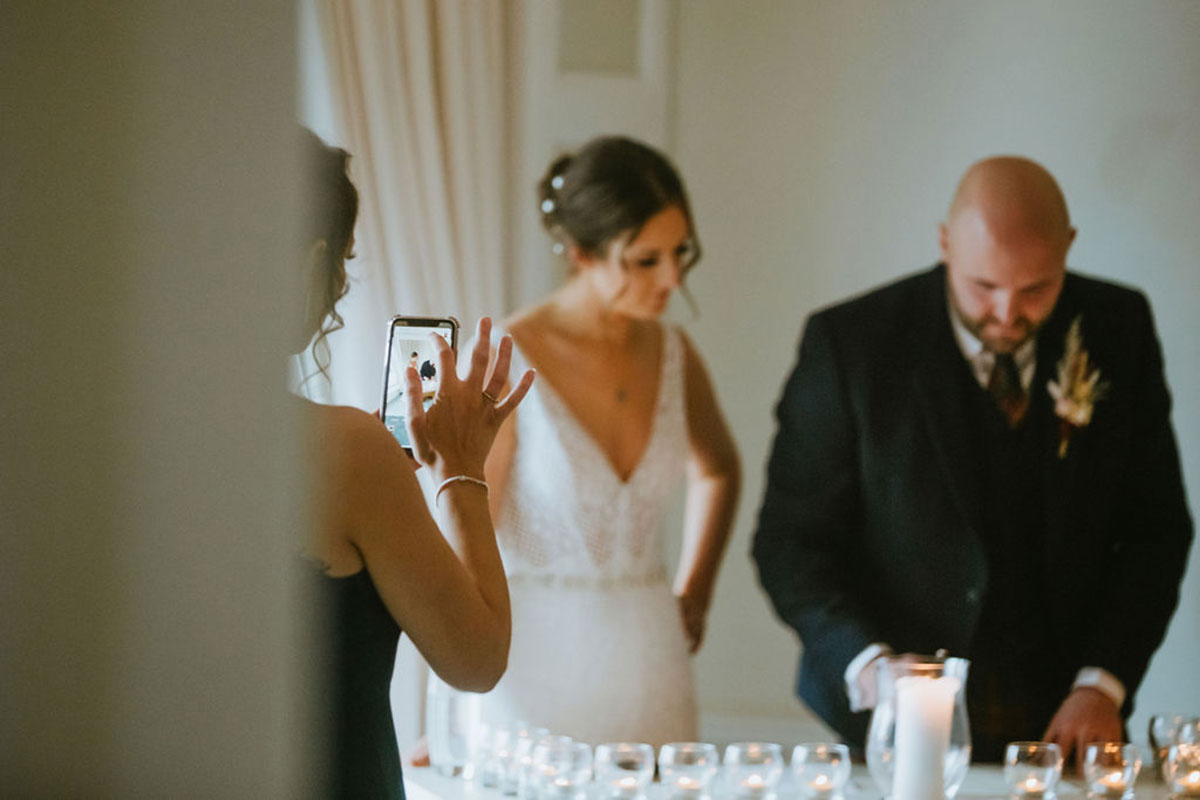 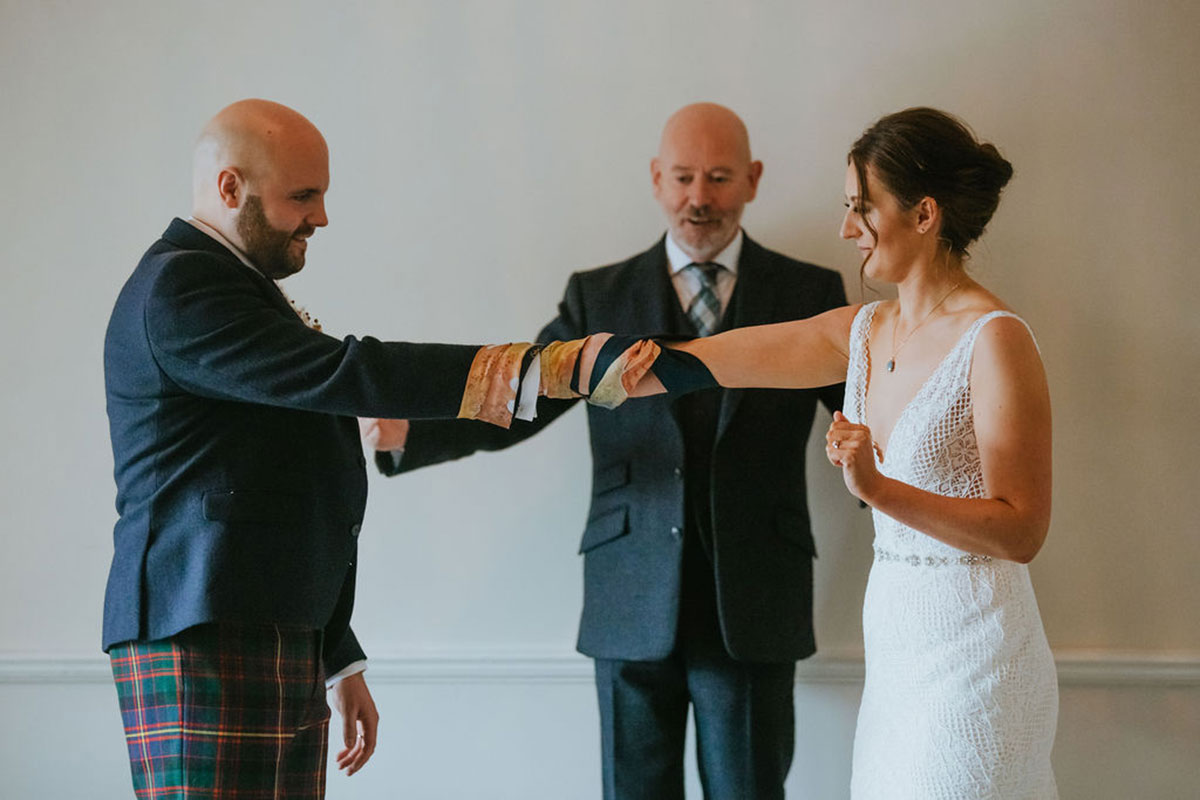 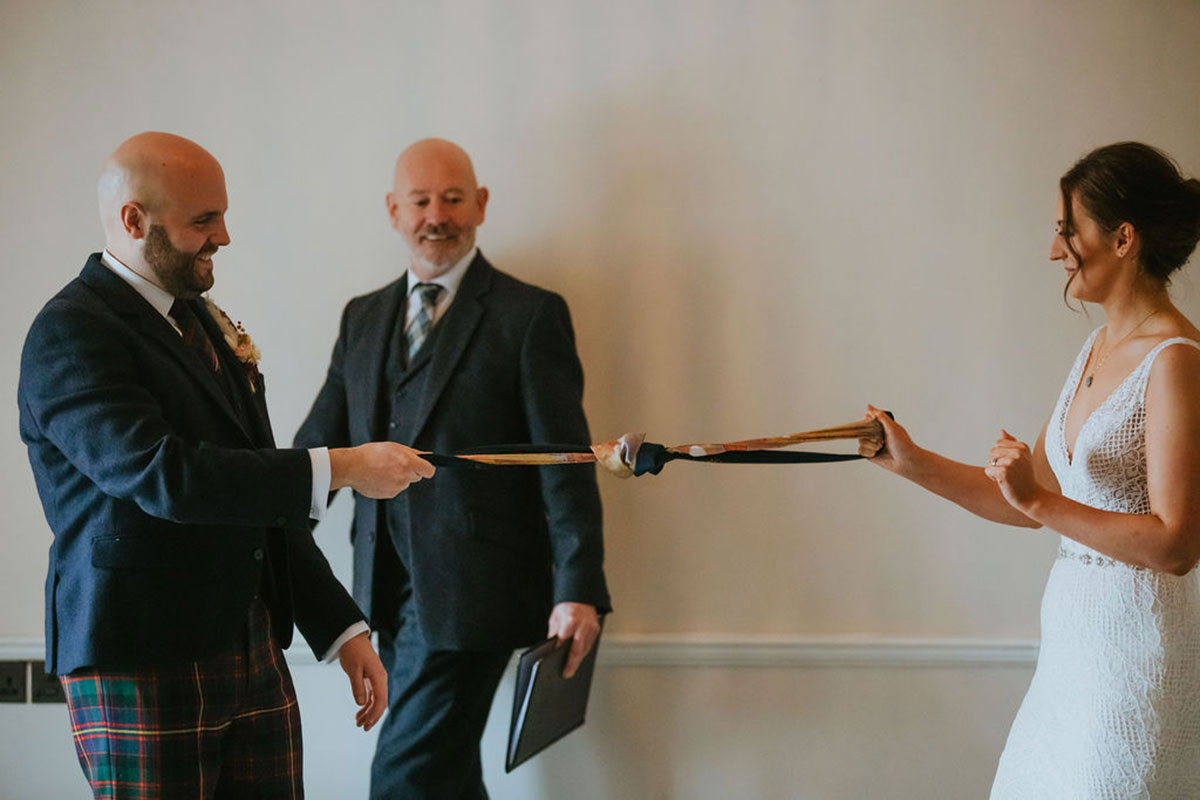 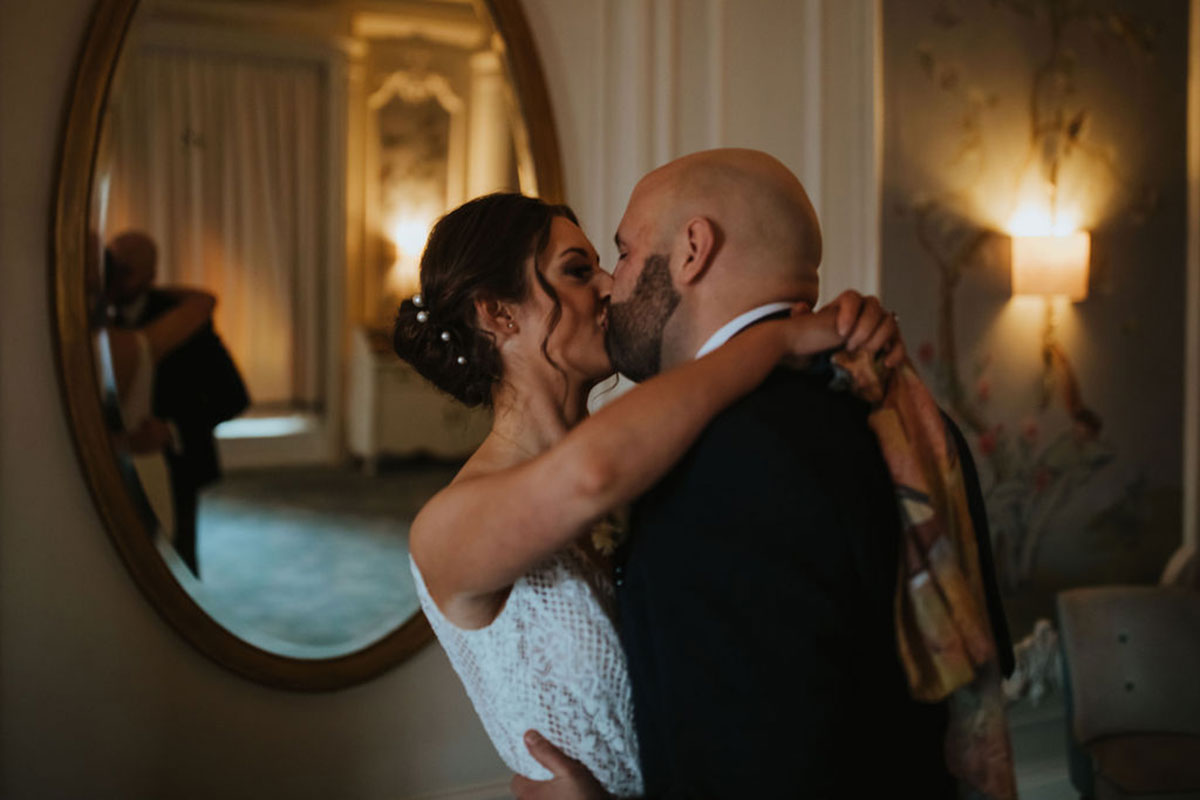 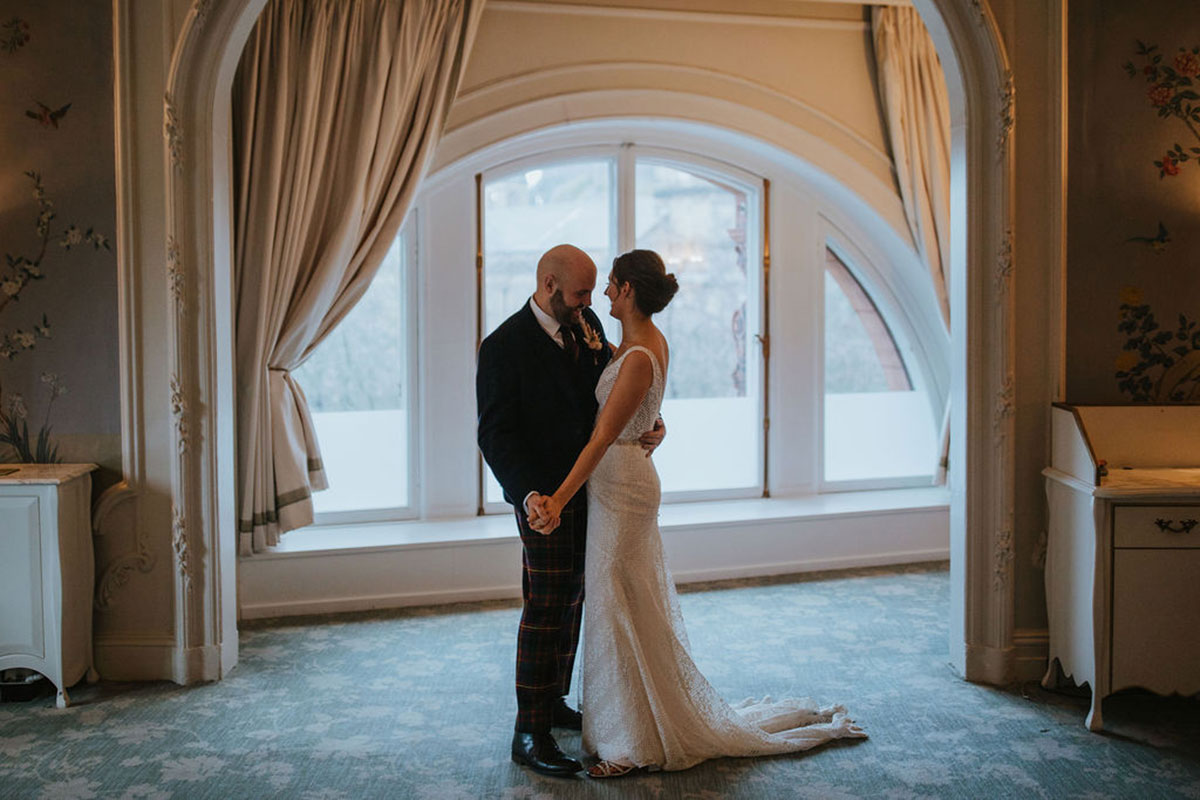 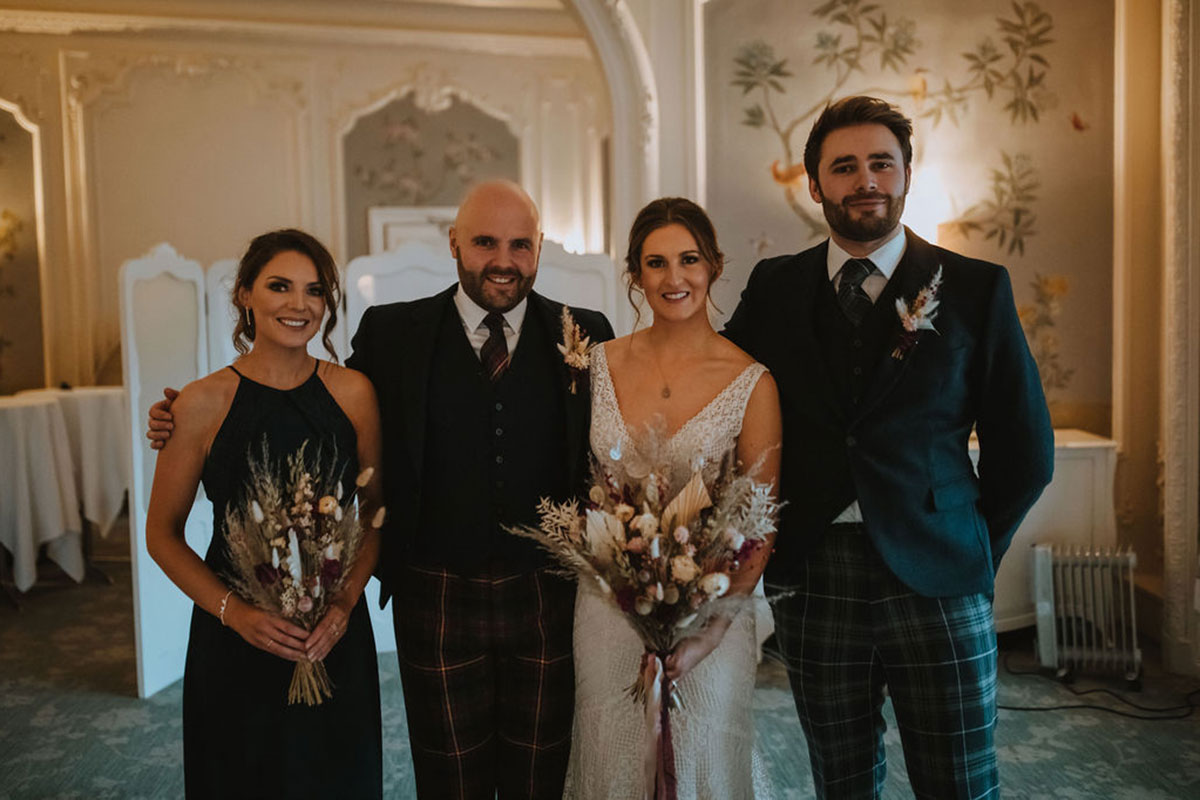 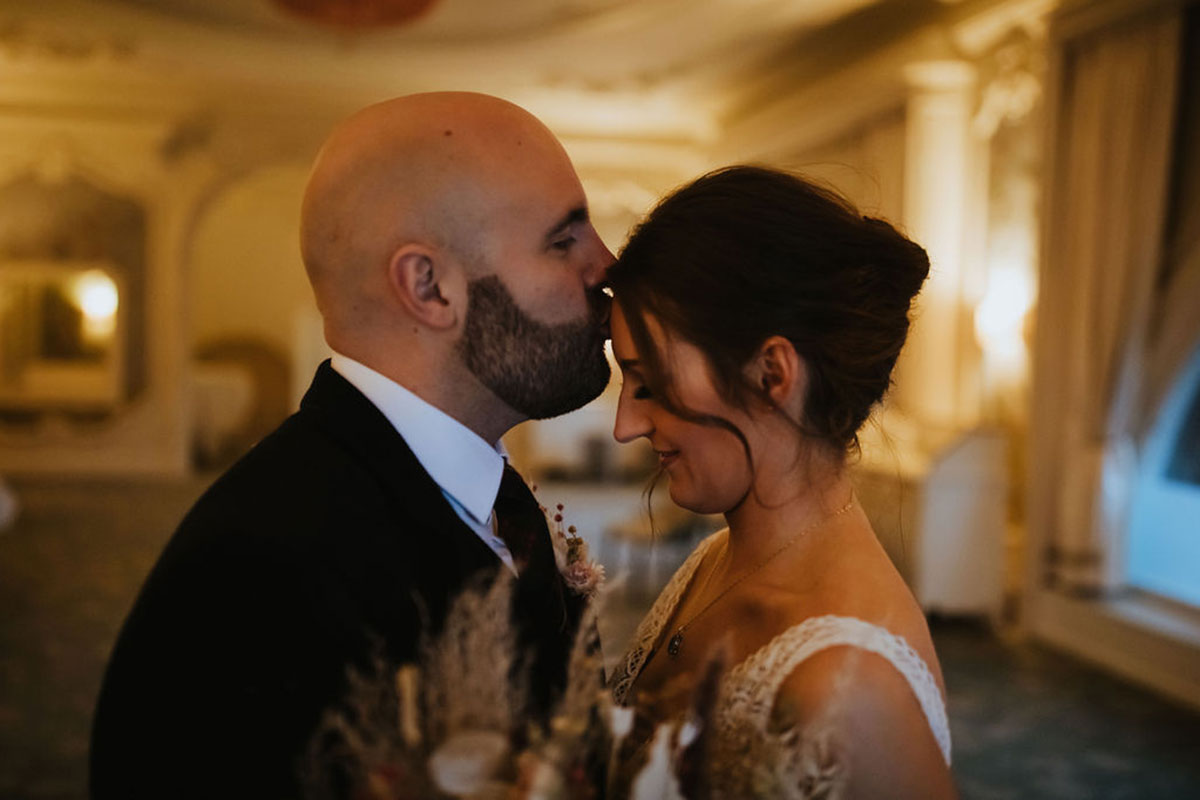 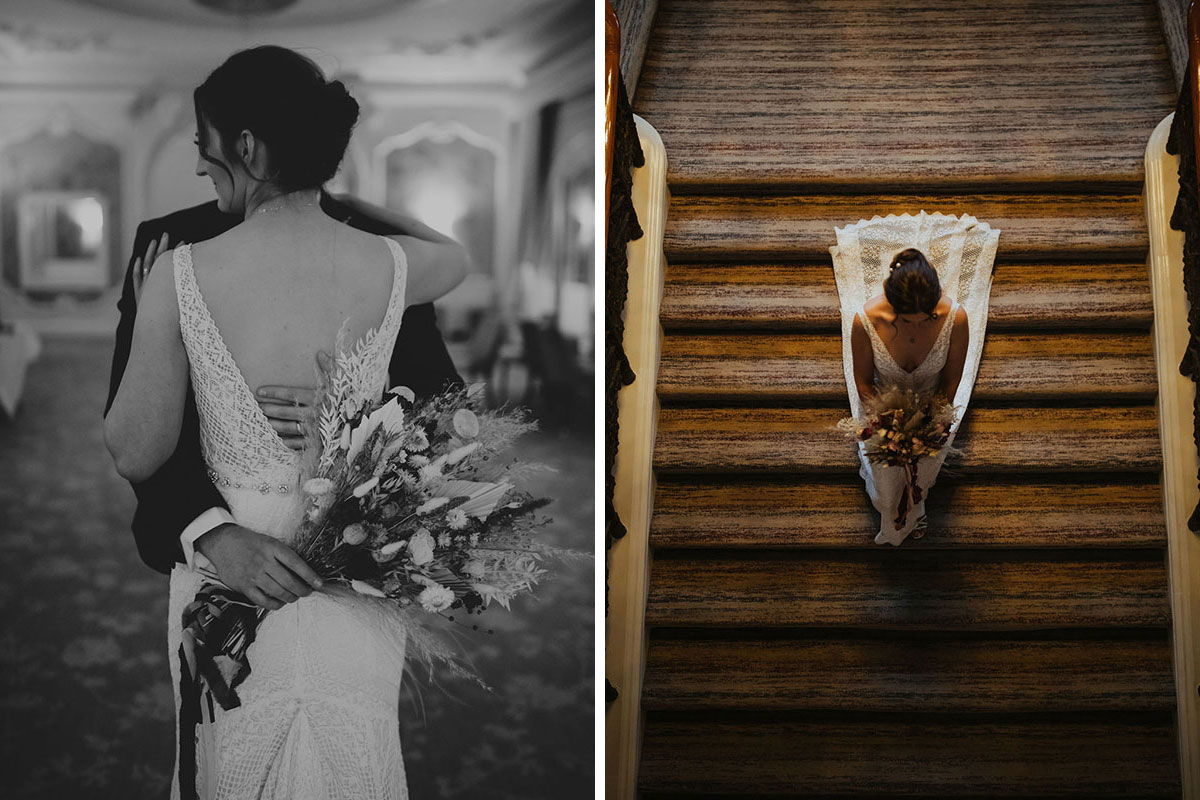 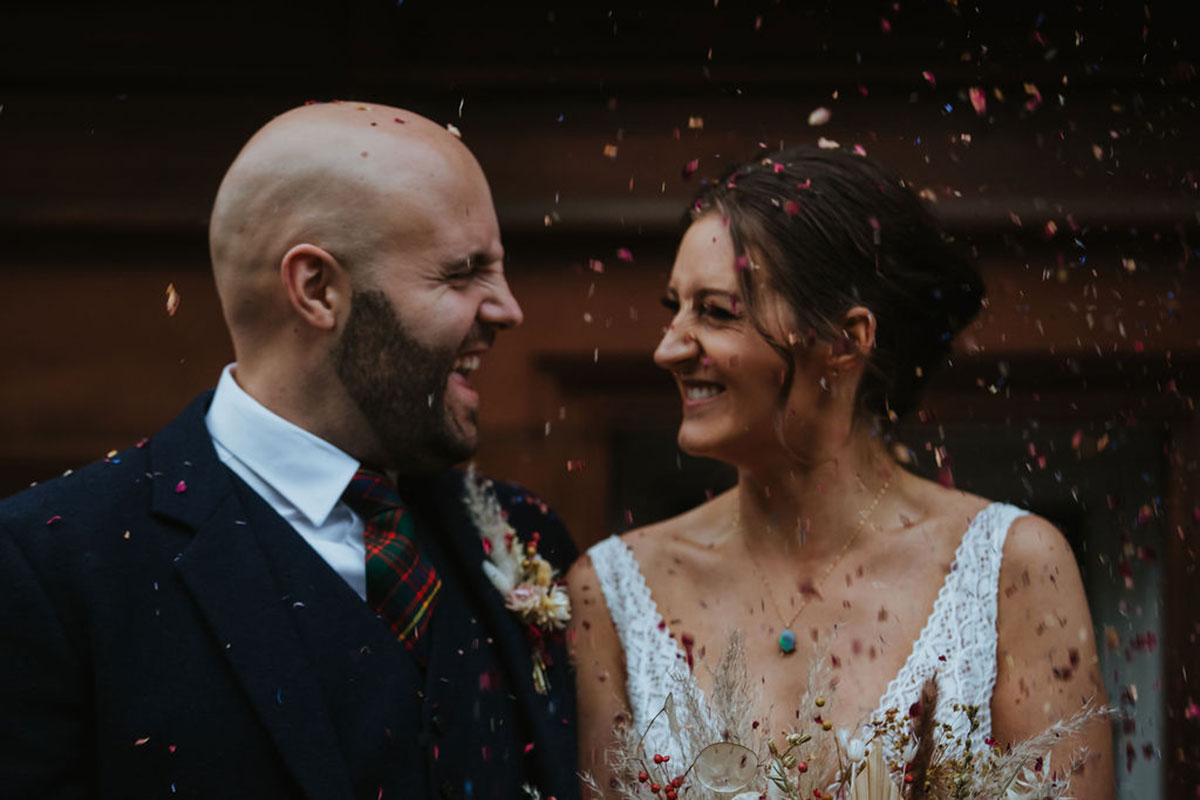 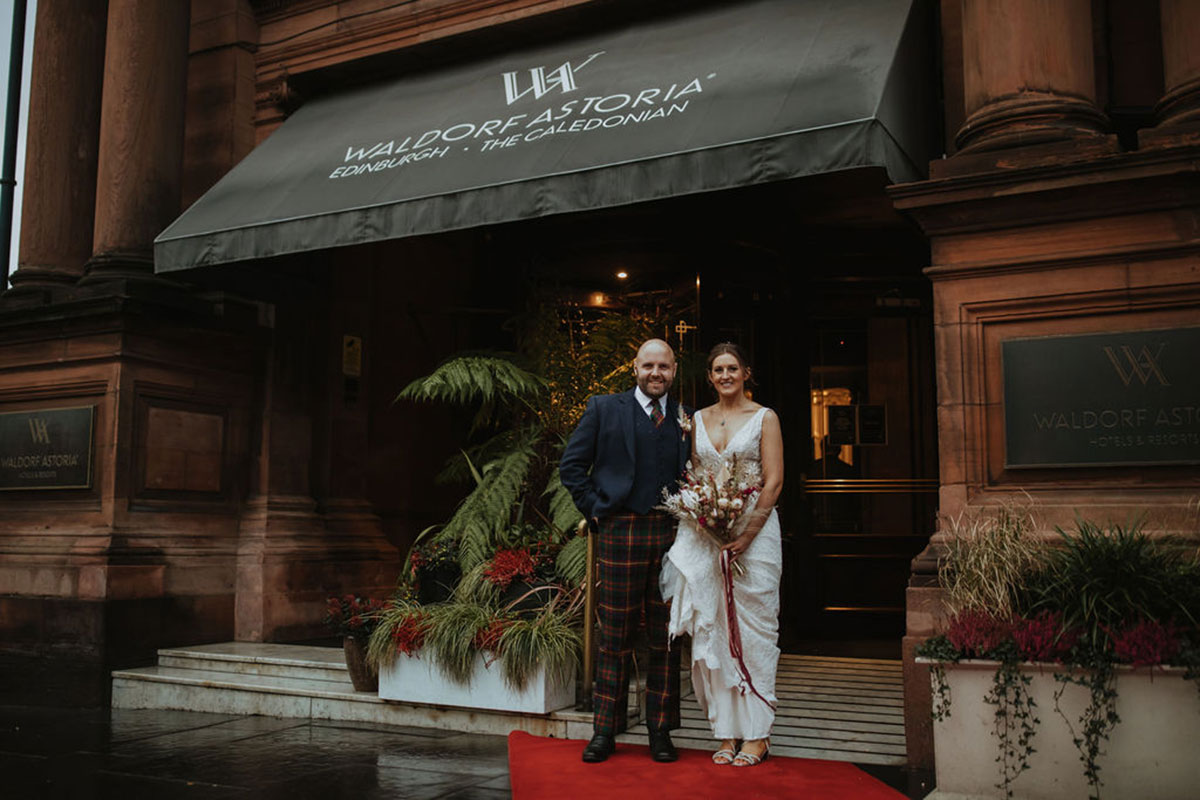 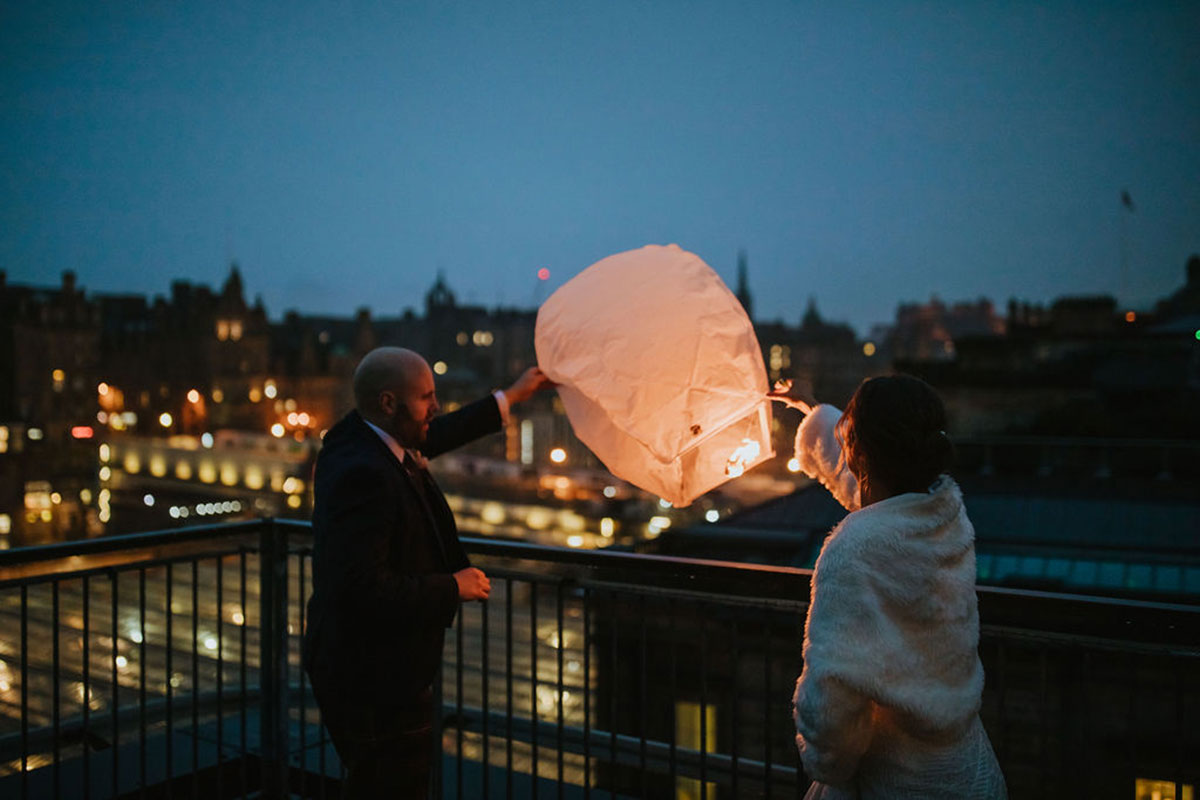 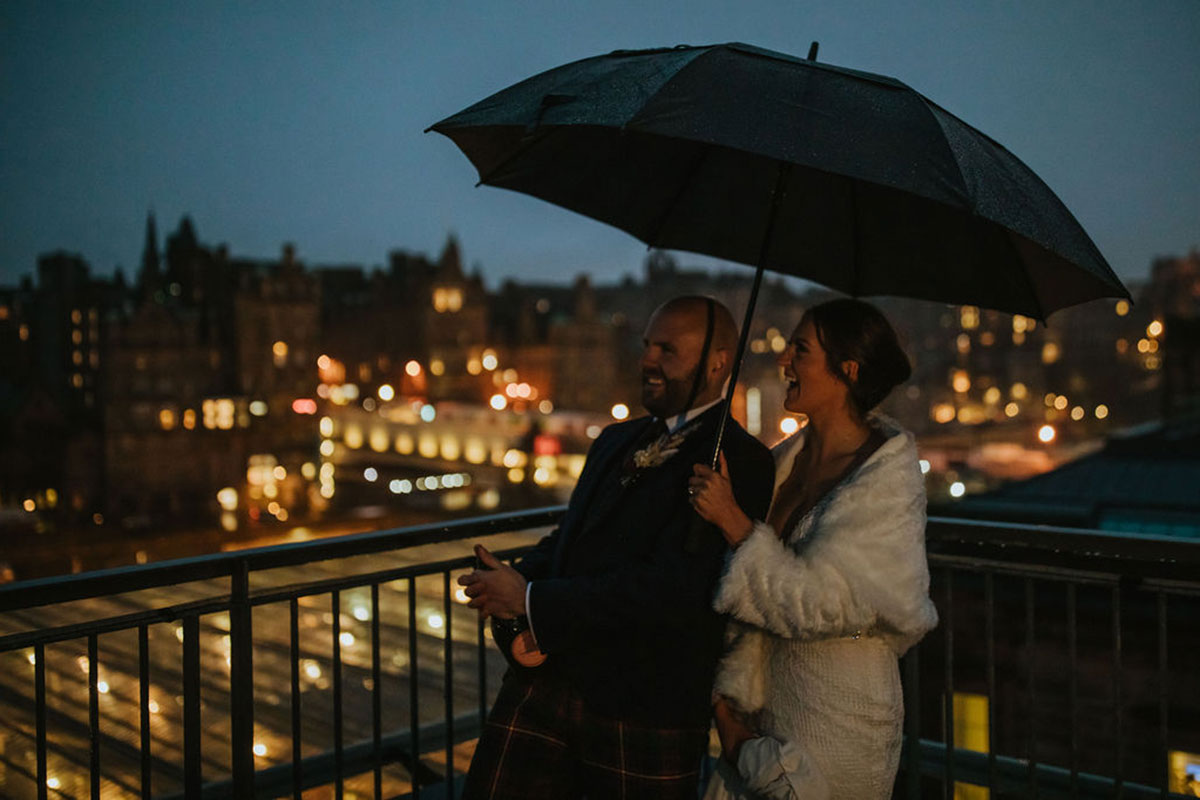 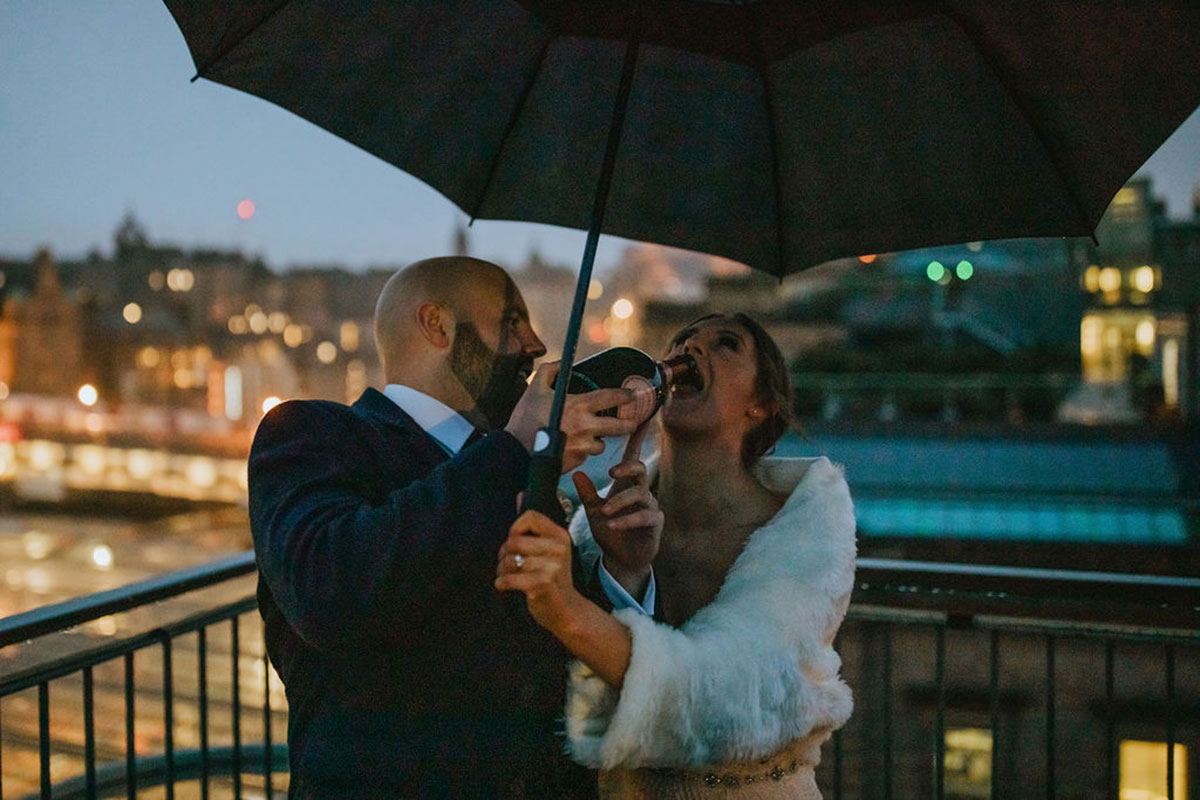 Time to shine: how long does sorting your rings and wedding jewellery take?