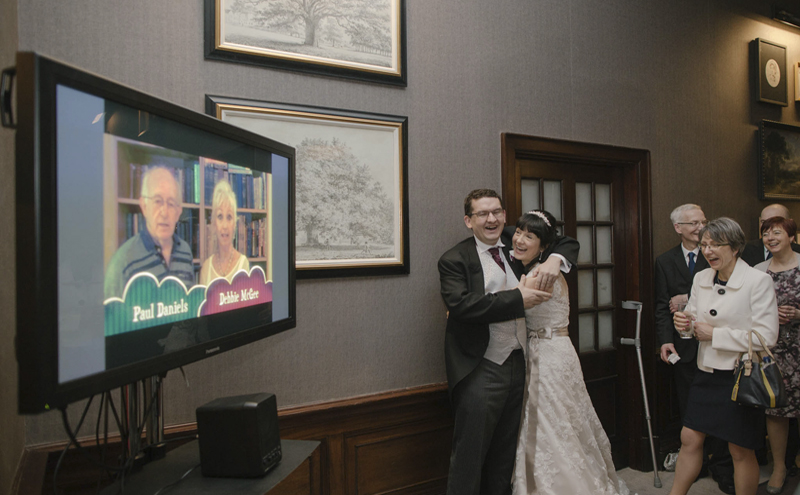 It’s exciting enough receiving a special keepsake or piece of jewellery from your H2B on your wedding day, so imagine how Ruth Brown felt when her fiancé Craig Moss tirelessly compiled well-wishes from all her favourite celebrities!

Craig contacted over 100 famous faces in his quest for a special treat for his new bride: “I’m the first to admit that the bulk of wedding planning was down to Ruth’s hard work. I was keen for her to have at least one surprise on the day, and thought some celebrity messages would be perfect.”

After researching online, it became apparent to Craig that celebs get inundated with tweets, emails and messages every day, so he decided to send a hand-written letter instead. After three months, and over 100 letters sent, he’d accumulated over 30 written responses and eight video messages. “It was much more than I was expecting to begin with, and I was very humbled by the effort some kind celebrities had taken to add to our special day.”

Craig presented Ruth with written messages from stars including Stephen Fry, Dame Judi Dench and Sir David Attenborough on the morning of their wedding, but saved the video for the drinks reception:

Ruth told us: “Aside from saying my vows to the man I love more than I can express, the video was undoubtedly the highlight of my day! I know people say it was the best day of your life, well it truly was.” Craig agrees, saying the only thing he’d change about the wedding would be “marrying Ruth 20 years earlier”.

Biggest bargain: “Our good friends Anna and Thom insisted on providing our cake and spectacular magic as a wedding gift,” reveals Craig. “It was a Star Wars-themed cake and the Chewbacca fur on one of the tiers was even endorsed for accuracy by the actual make-up artist who worked on Chewbacca on the new movie!”

Top tip: “Start as early as possible and add 30% to your initial budget!” laughs Craig. Ruth agrees, but notes: “think about how to entertain your guests, particularly at natural breaks such as during photos or band set-up. We provided a small wedding questionnaire and had a photobooth, magician and string quartet. We also had a slideshow of old photos of our friends who were attending.”

Delightful dozen: our highlights from The Scottish Wedding Show

A pretty pastel celebration at The Parsonage at Dunmore Park