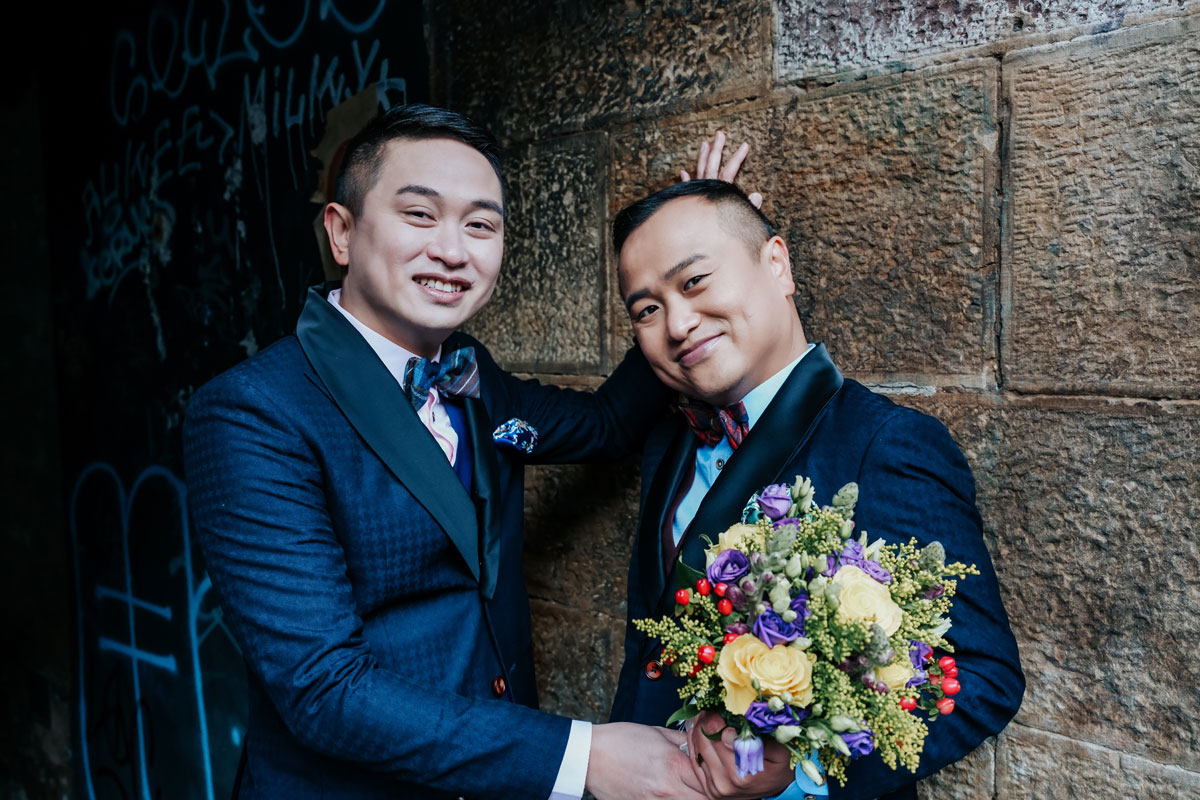 “Angus and I met on 14th April 2018, went on our first date on 30th April 2018, and moved in together not too long afterwards. We realised pretty soon after we met that we were going to be lifelong partners and build a family together.

We still wear the rings we got on the anniversary of our first date. They’re posy rings, engraved inside with: ‘My promise past shall always last’.

Our first wedding planning decision? To find a wedding planner – ha ha! Same-sex marriage is illegal in Hong Kong (where we were living at that point), so we had to plan a wedding overseas. Rather than have any hassle, we enlisted the services of a company called The Next Chapter. Essentially, we just had to turn up on the day – they arranged everything for us.

We originally scheduled to have our big day in Iceland in February 2021. However, due to Covid, that was postponed. As we planned to settle in the UK in late 2021, we eventually decided that we should get married in Scotland instead.

Scotland in winter is epic. We were getting married in the registry office at Edinburgh City Chambers and we adored the capital’s historic buildings, the cosy vibes and, of course, the whisky!

We thought it would be just the two of us at the wedding, but in the end there were four guests: my cousin and her husband, and our friend Valerie with her mum. We also hosted a live-stream on Facebook, so there were more than 100 friends watching inHong Kong.

We walked down the aisle to a song called Glory to Hong Kong. It commemorates the warriors who fought and made sacrifices for liberty and democracy for Hongkongers during the 2019 protests.

The ceremony was over in a flash. Angus was emotional when saying his vows, so I grabbed his hands to let him know it’s all alright. It’s hard to repeat the wedding vows, so he got a bit tongue-tied too – it’s a long and difficult verse with a lot of unfamiliar words. I laughed, but it was all so touching.

After the nerves of the ceremony were over, we felt accomplished and relieved as we signed the register. It was a magical feeling stepping into our next chapter together.

The one wedding tradition I was most excited about? Tossing the bouquet! I had longed for this my whole life, so Angus and I threw the bouquet together to our only single friend there. It was so much fun!

We loved our photographer Dougi McMillan because his style is funky, natural and vivid. Looking at his portfolio online, we liked how he captured unexpected moments, finer details and the atmosphere at weddings. We’ve ended up with a lot of spontaneity in our photos, which was all down to Dougi. We were nervous and it was so chilly that day. Dougi helped us a lot and really got our funny sides out of us.

We had a really yummy wedding breakfast at Fishers in the City. We drank a lot of wine, champagne and whisky before and after the meal. It was our first big feast in the UK, so we really went for it. I had been on strict diet for the whole month prior to the wedding because I was scared I wouldn’t fit into my outfit!

We loved our suits made by Mijosu in Hong Kong. We chose the fabric and buttons and they took three months to finish. That said, our only slight regret about the wedding is that we missed the opportunity to wear kilts.”

Wedding planner The Next ChapterPost-wedding meal Fishers in the CityGroomswear Mijosu Hong Kong
Flowers Banks Florists
Hair and makeup The grooms’ friend, Valerie. “We are so grateful for her help.” 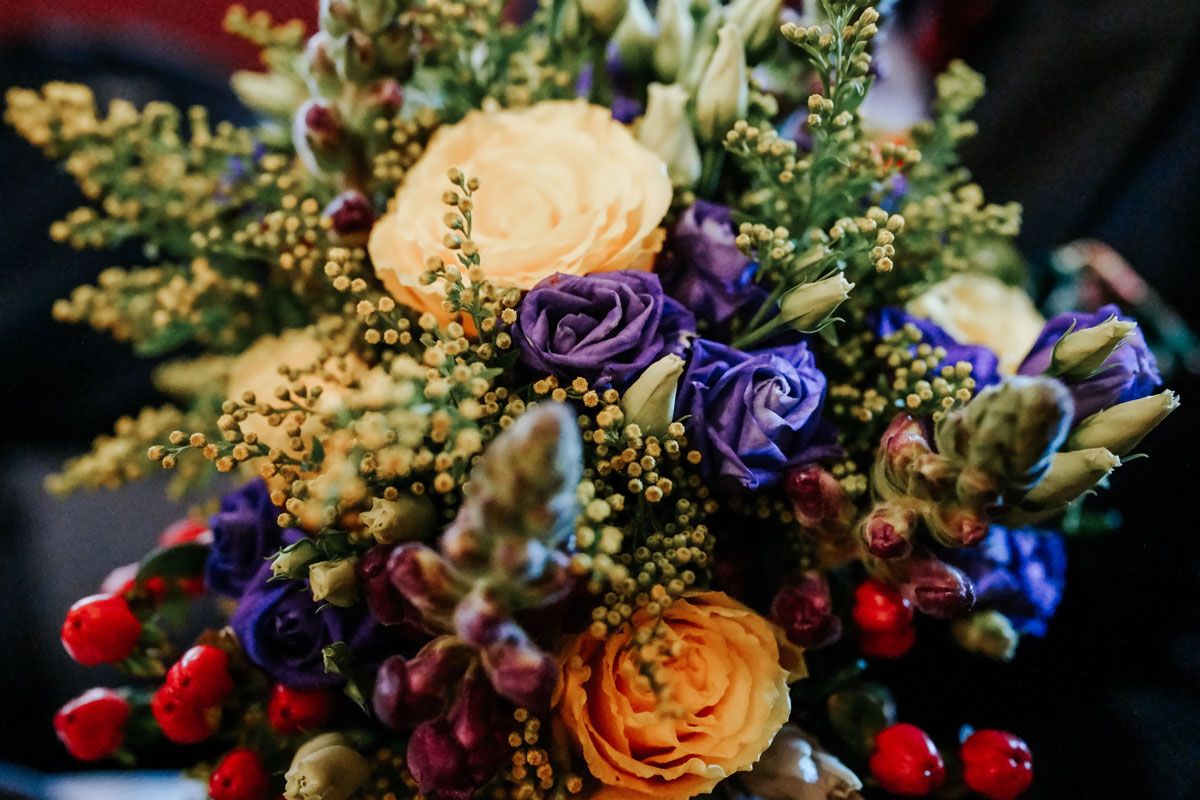 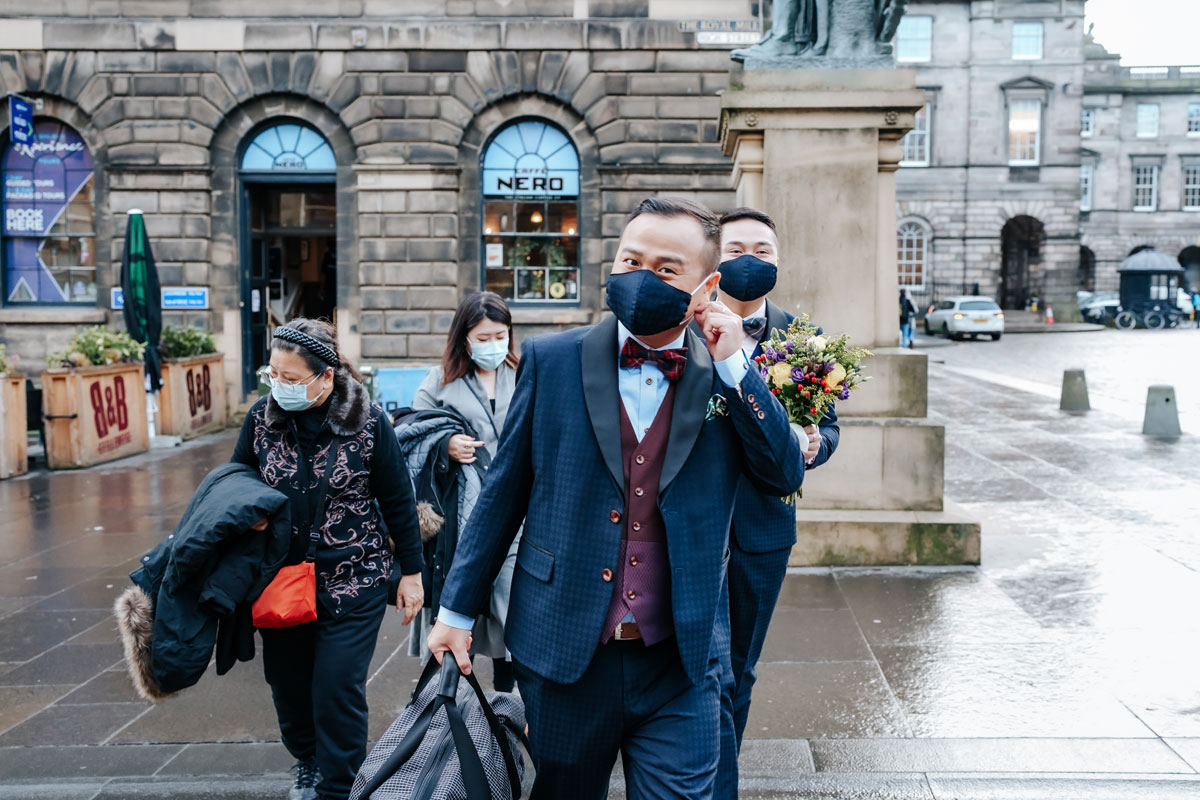 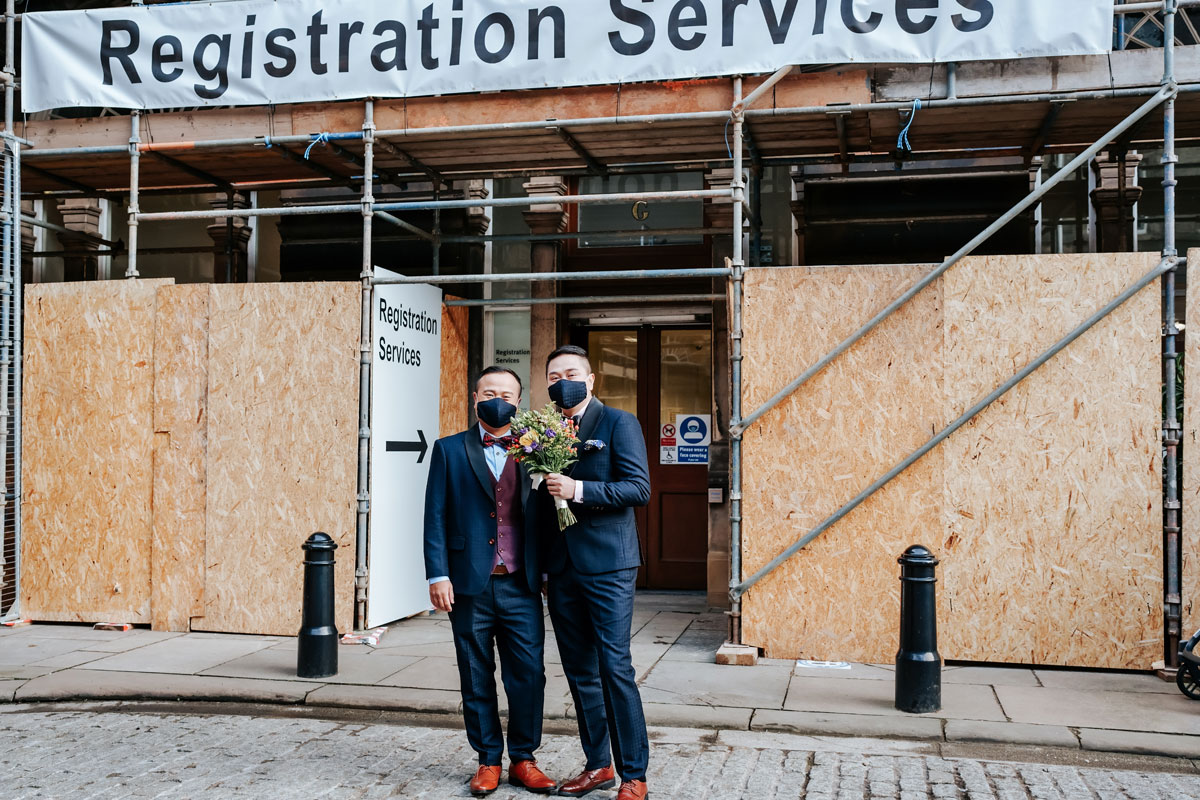 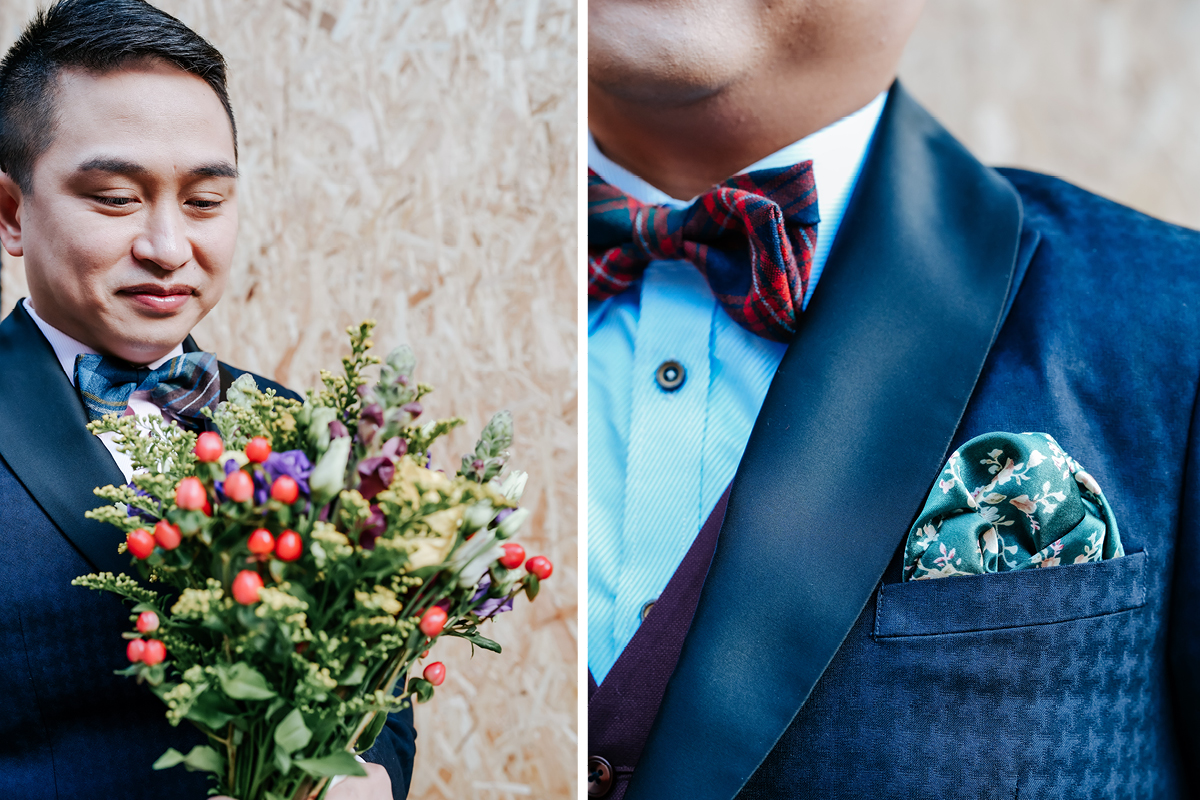 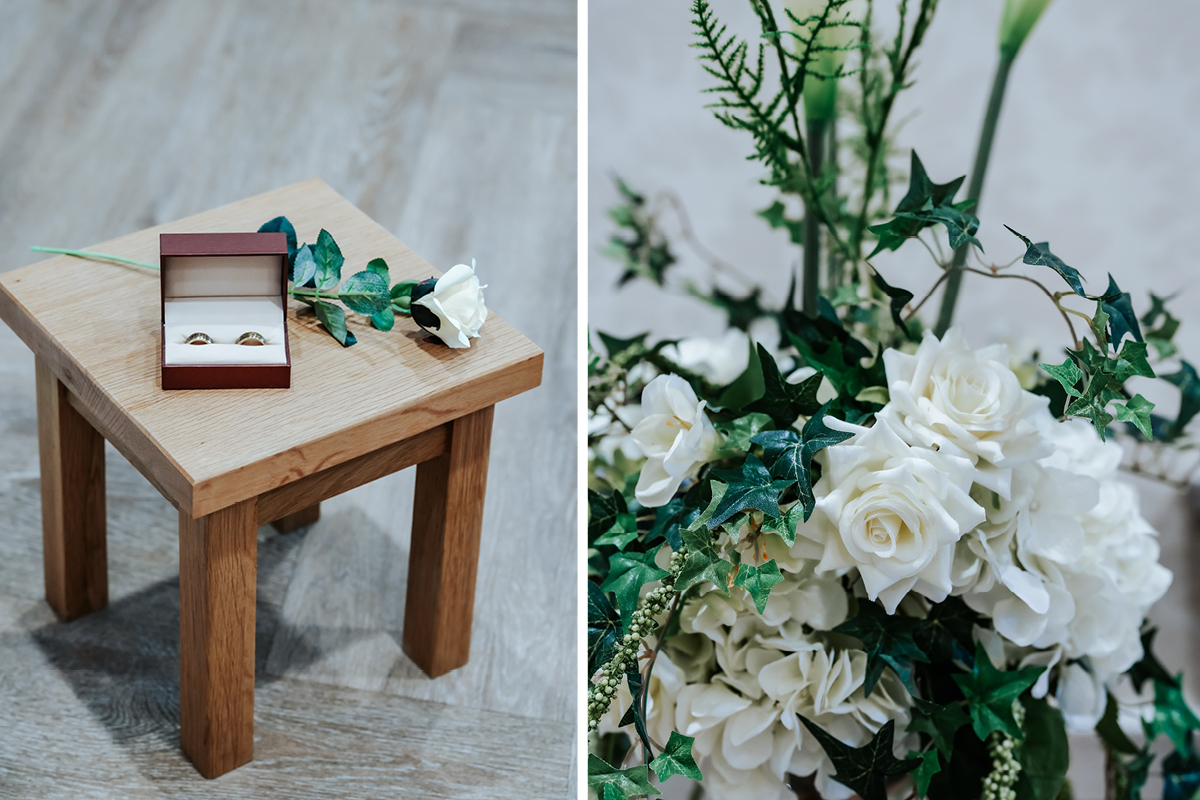 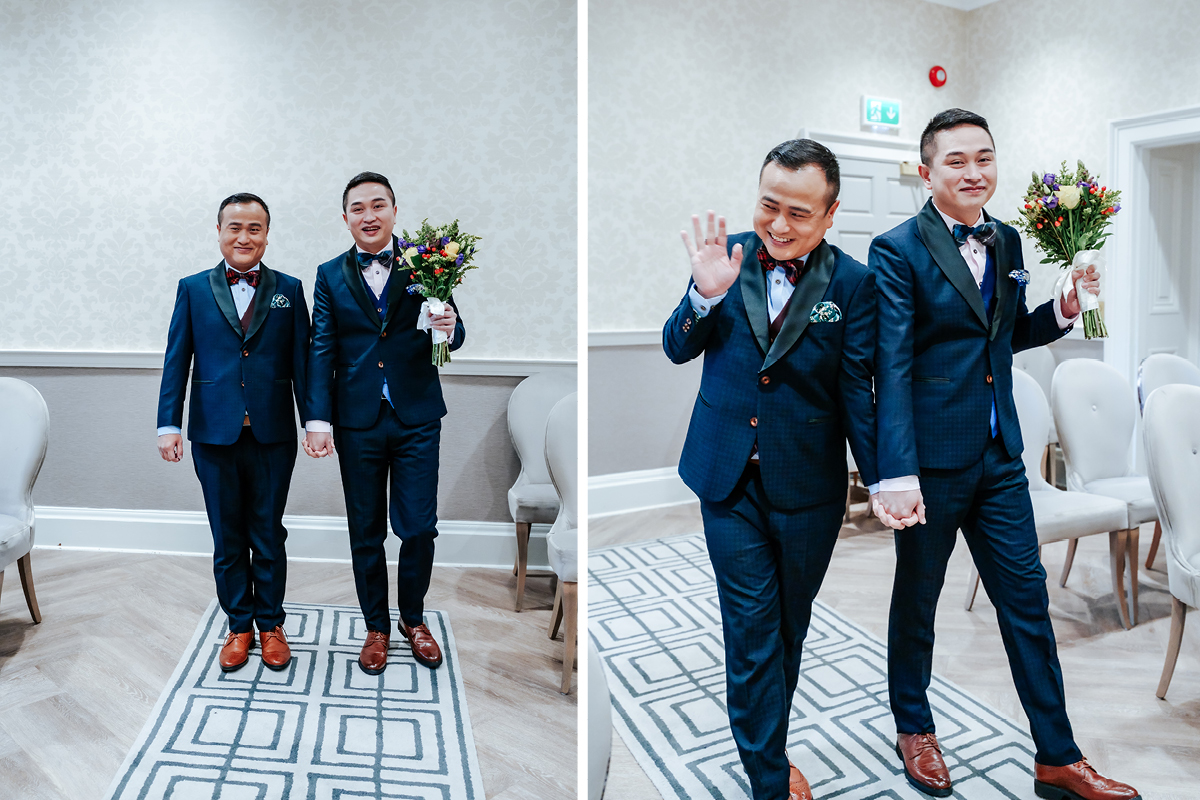 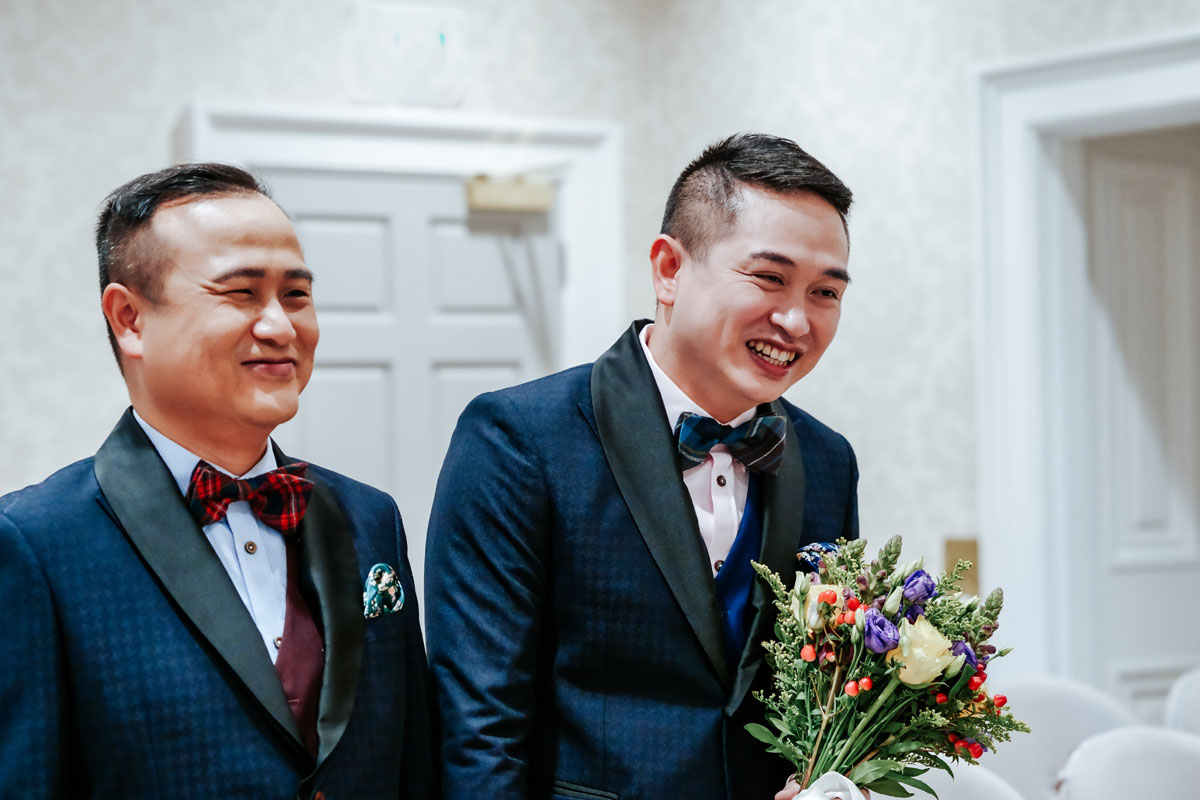 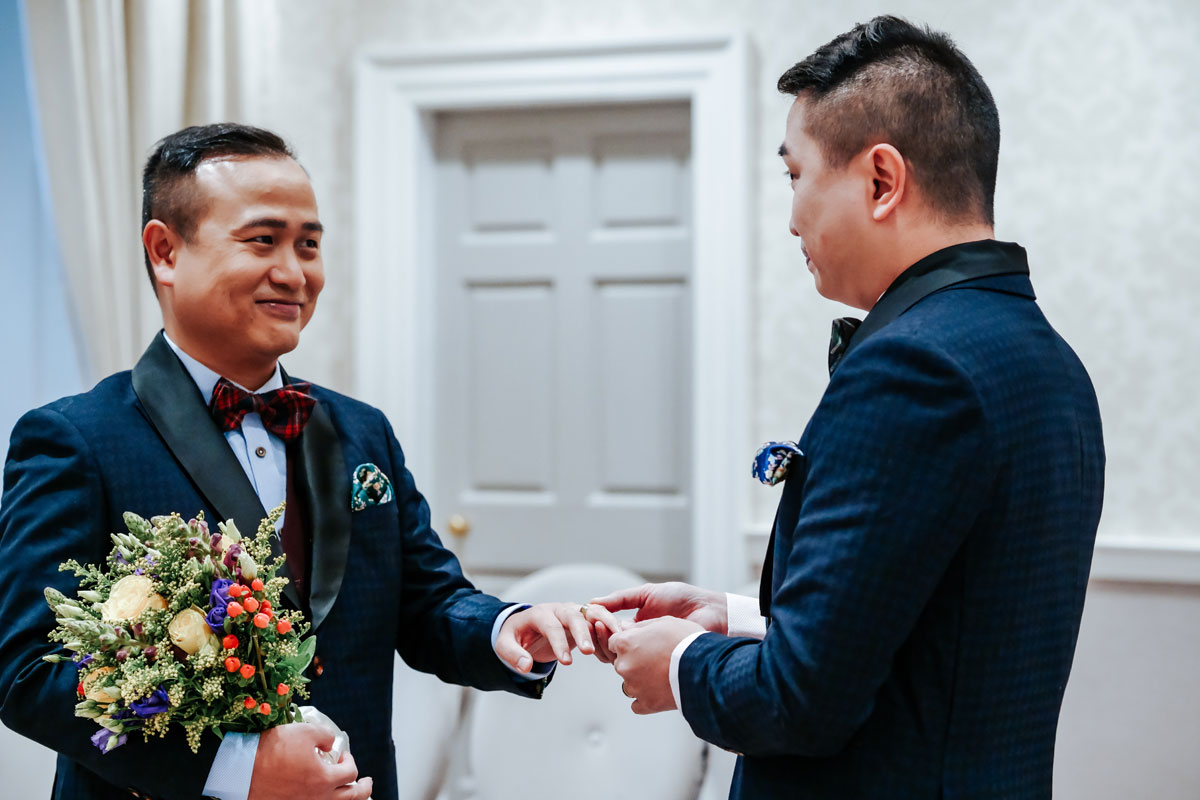 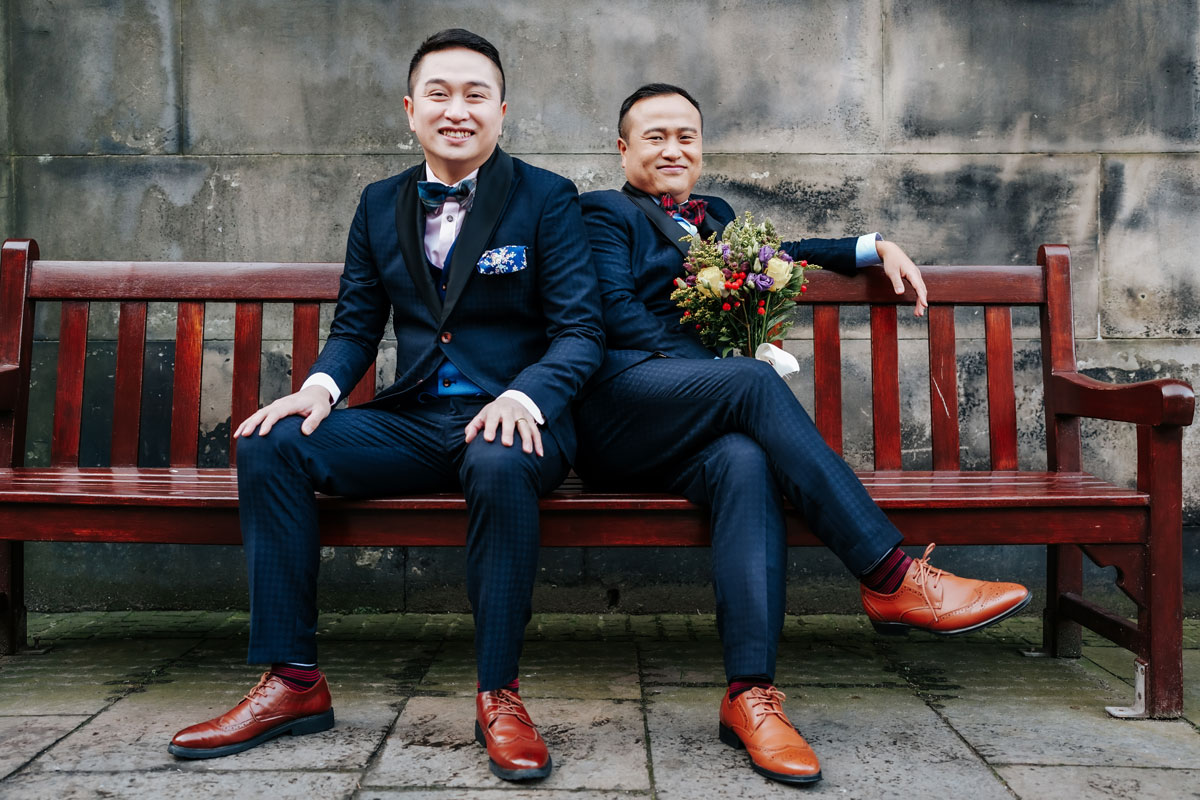 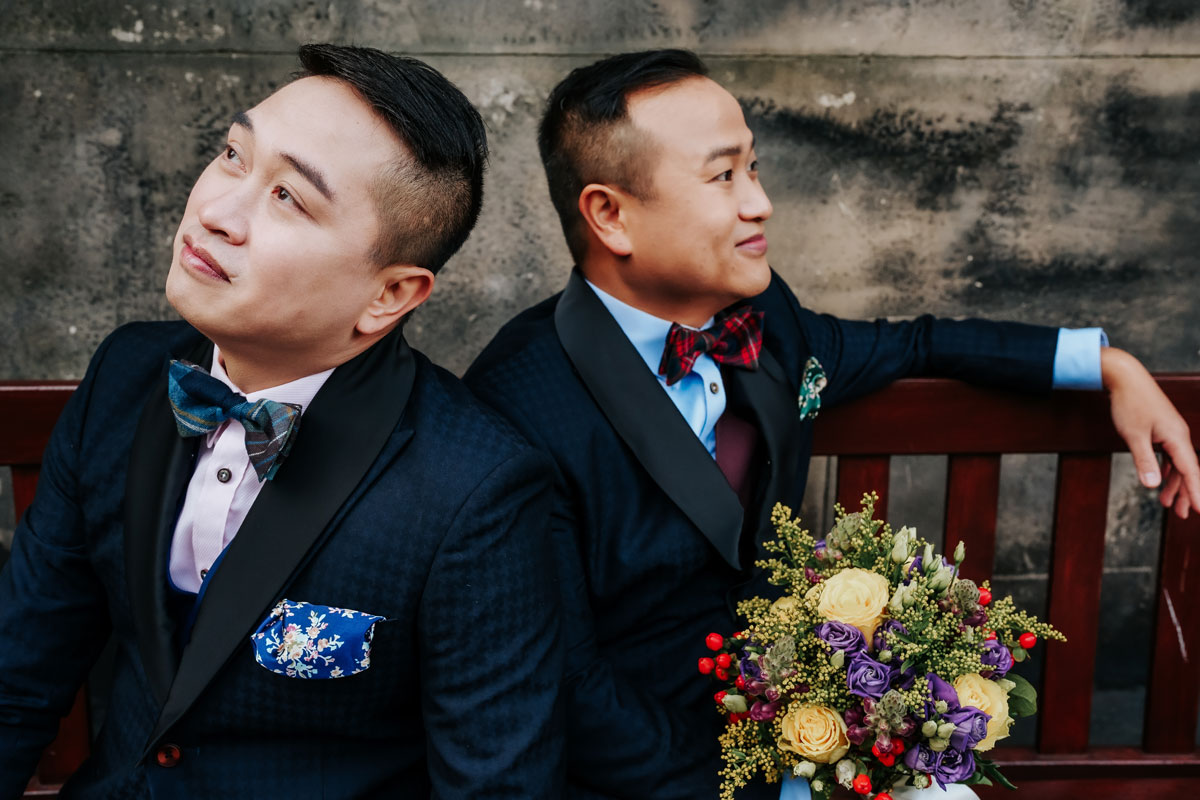 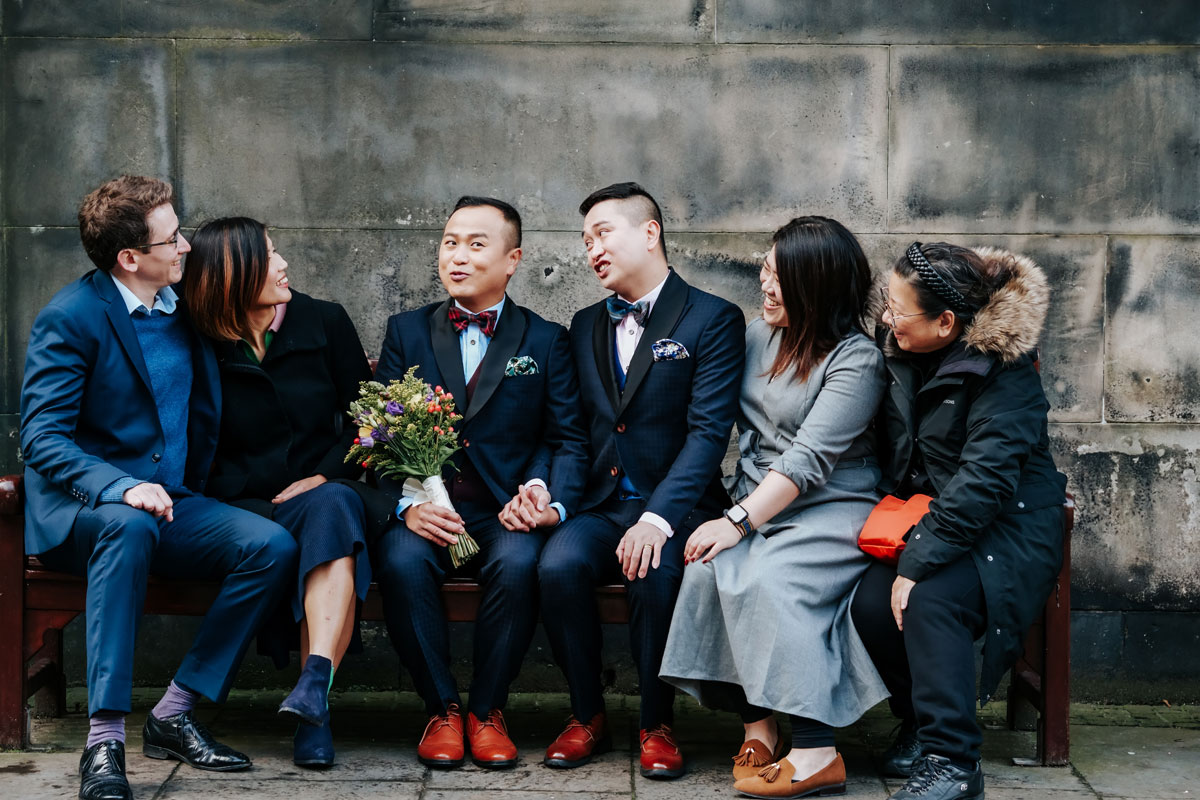 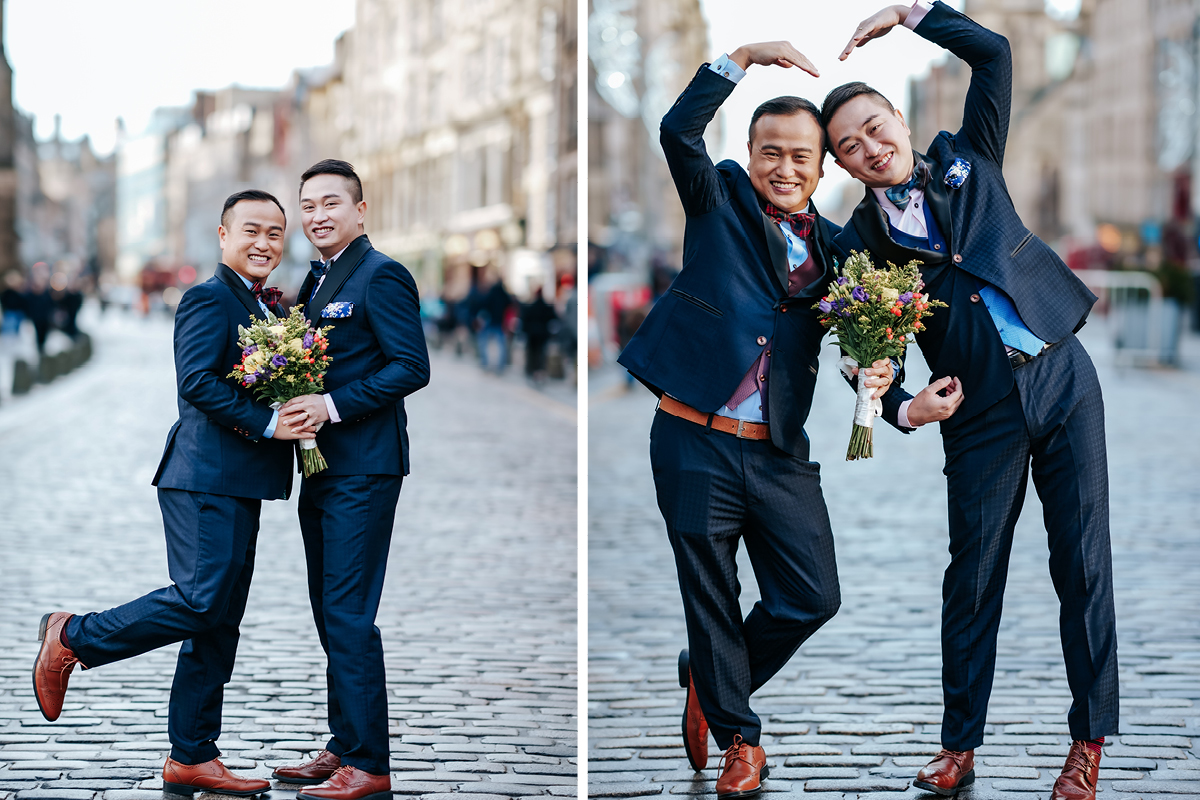 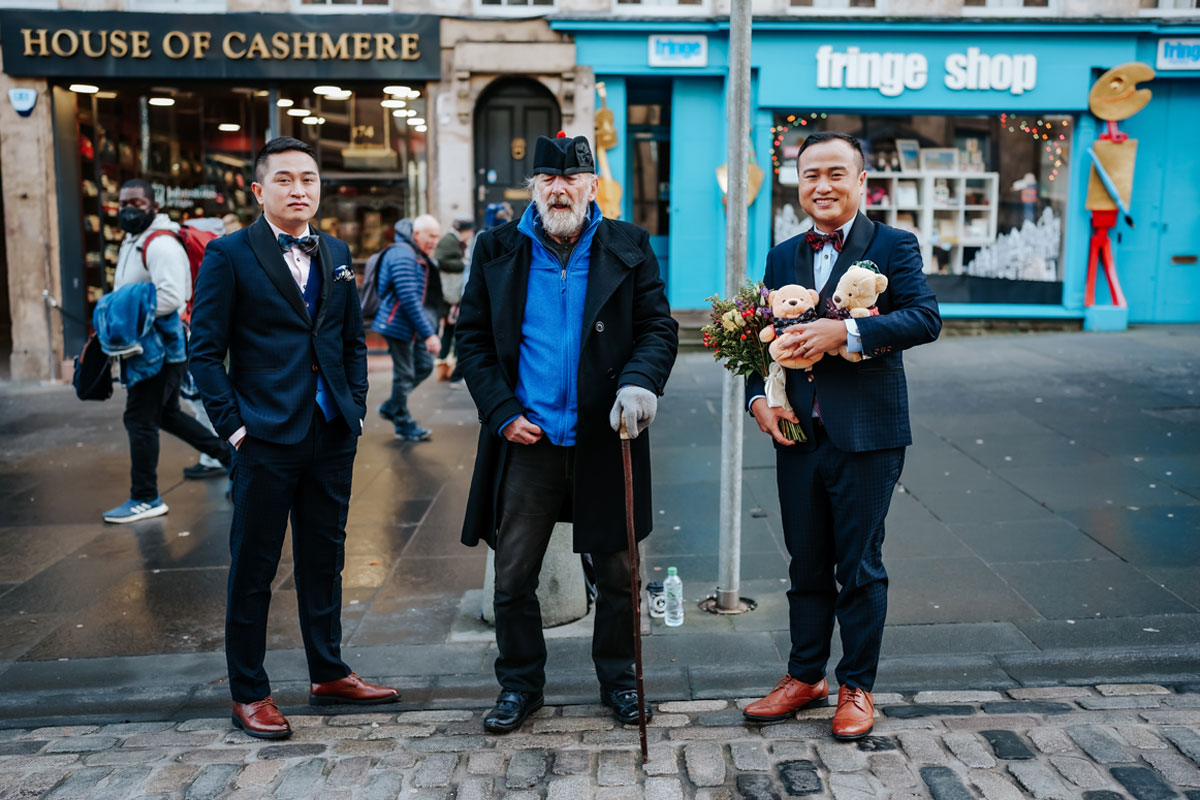 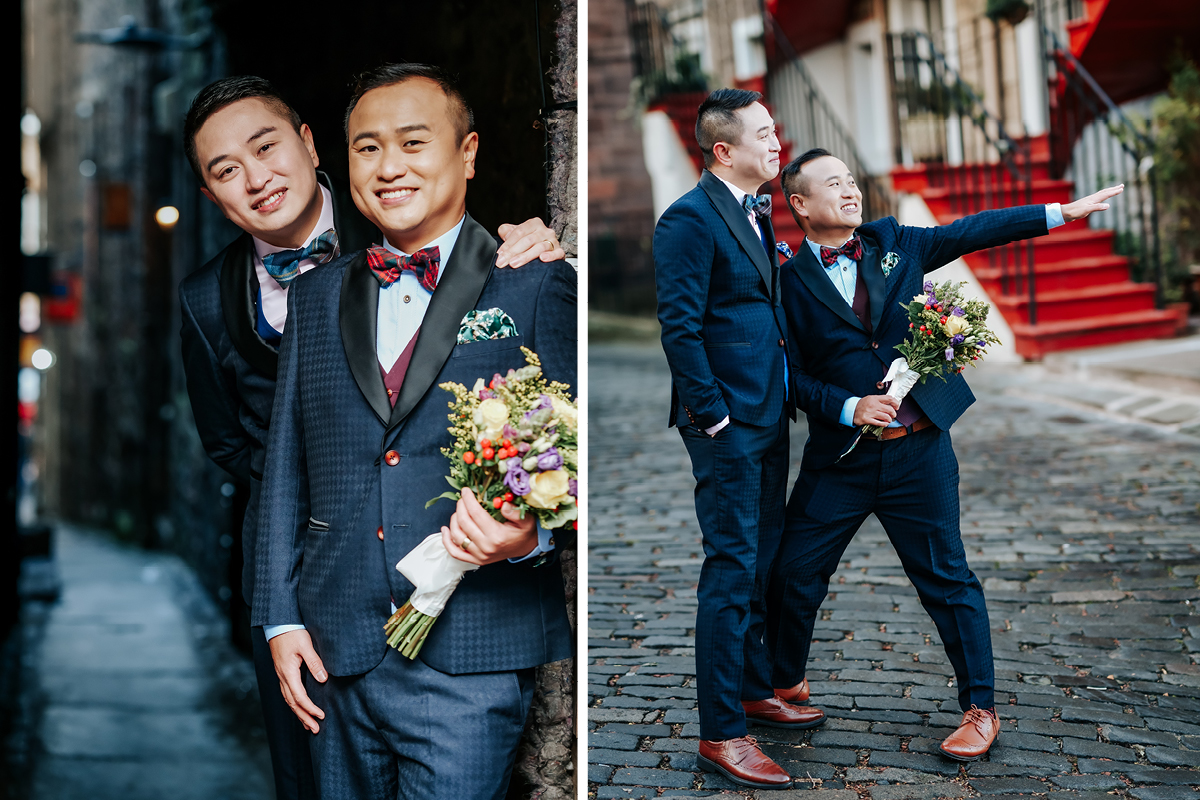 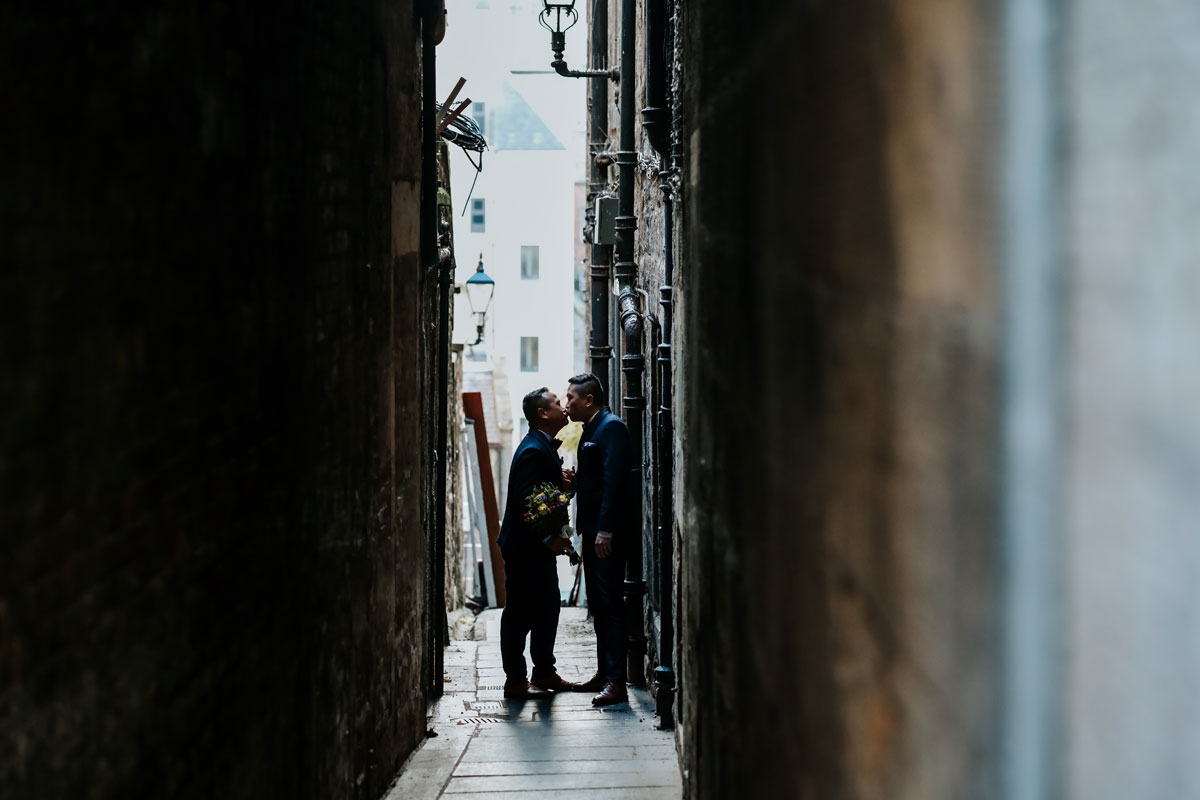 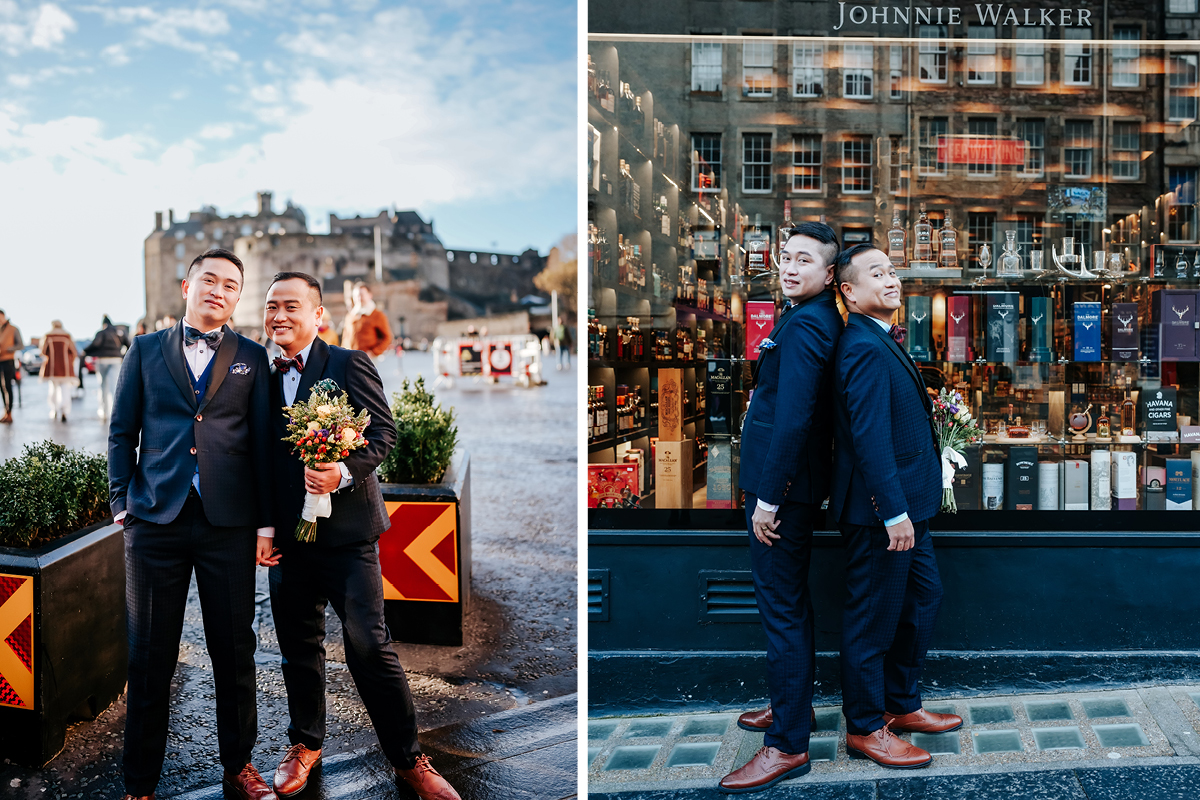 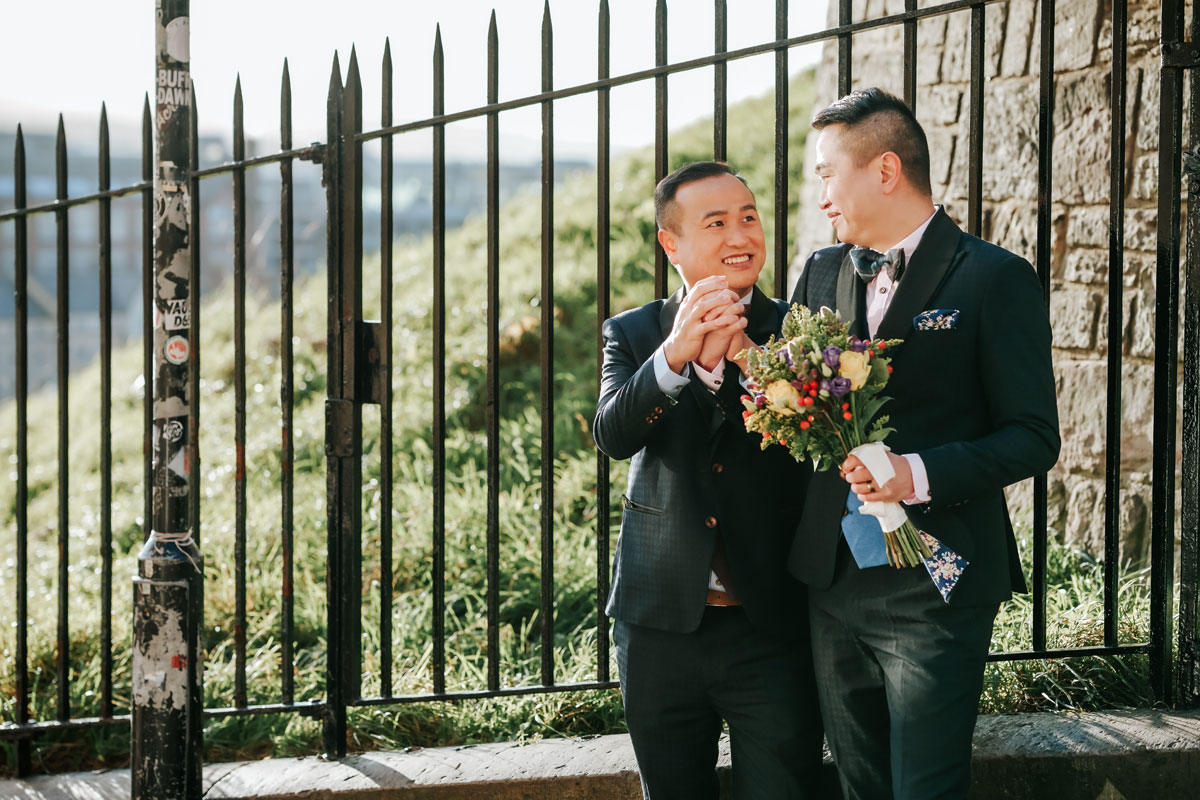 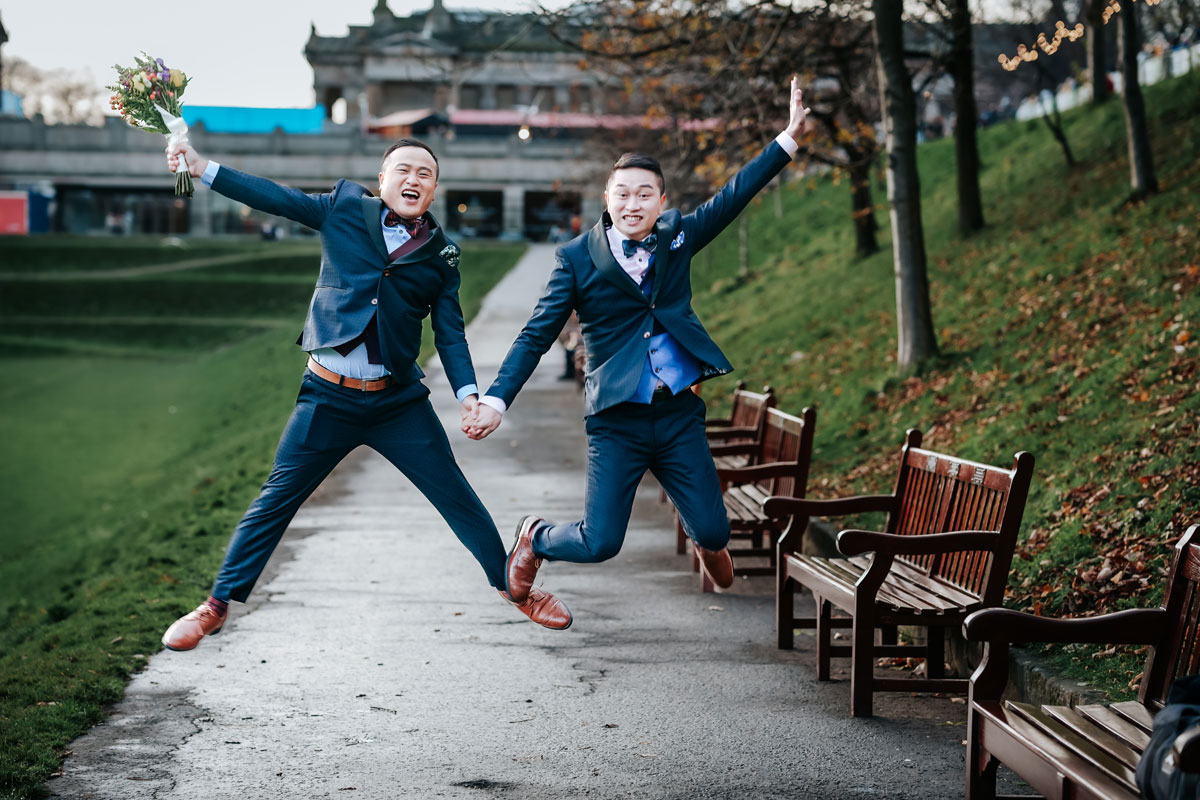 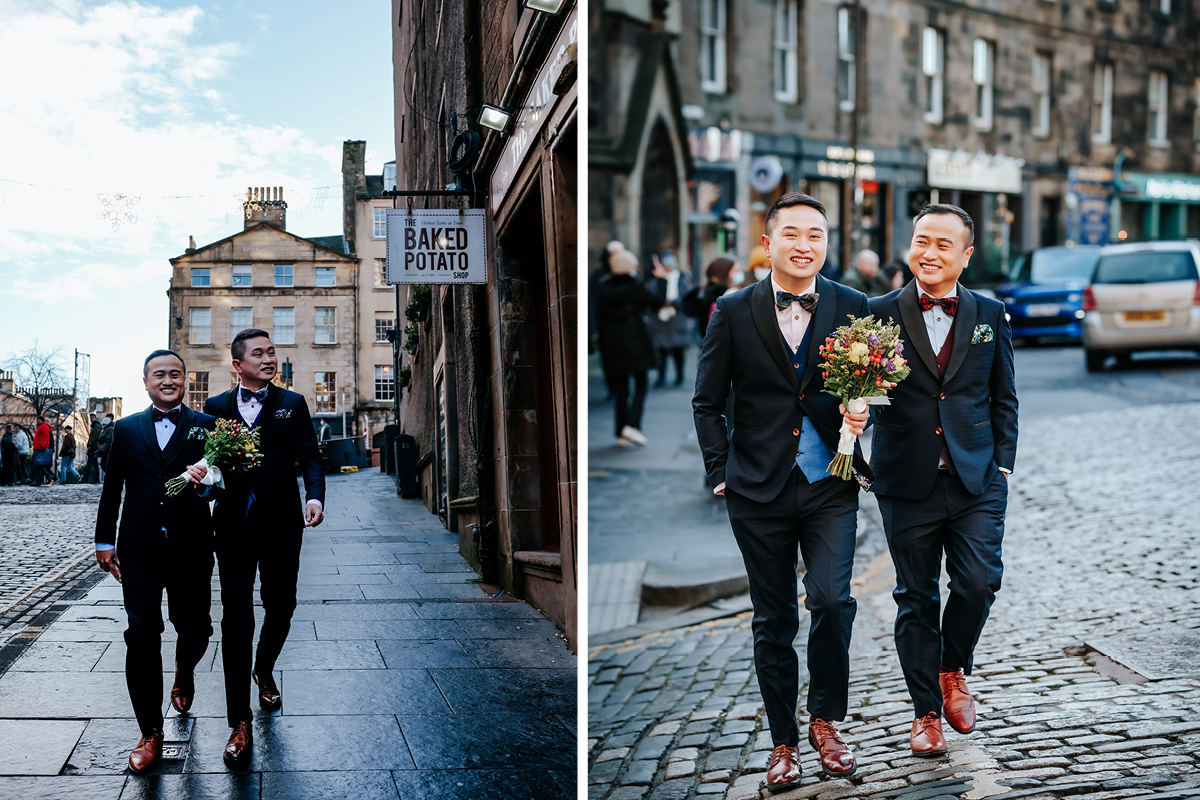 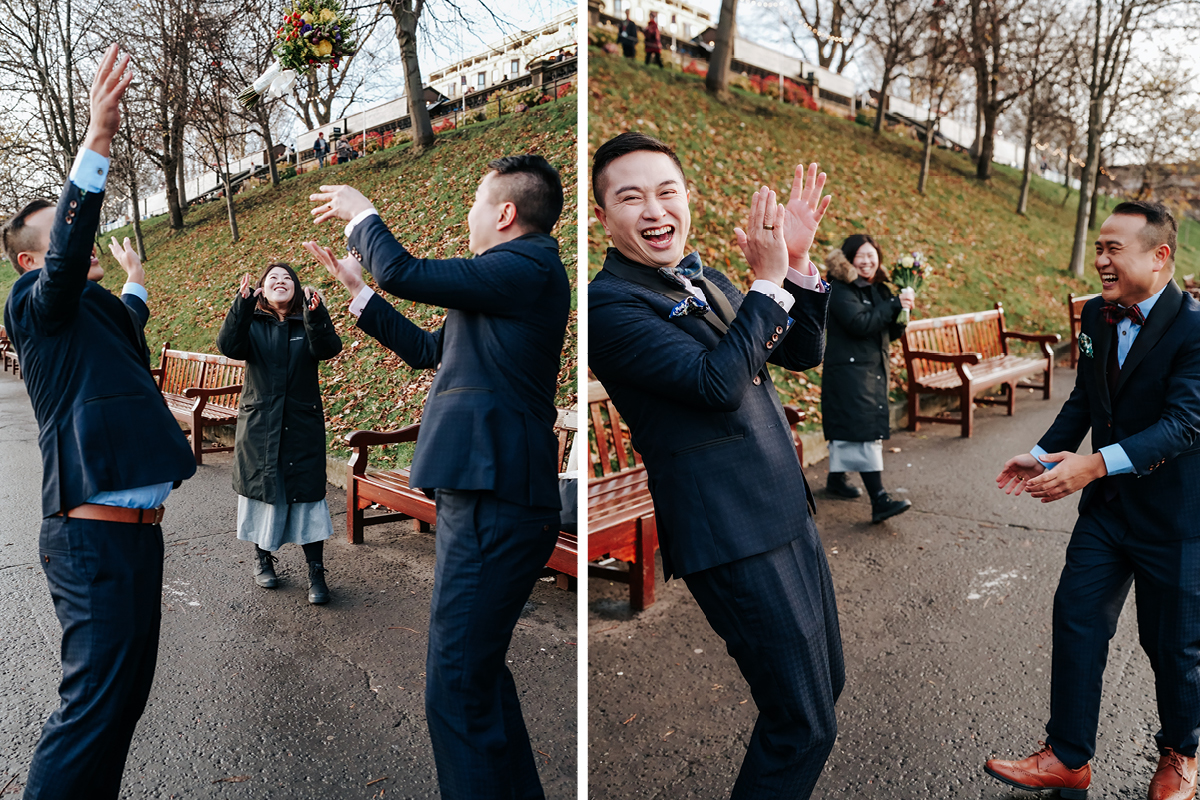 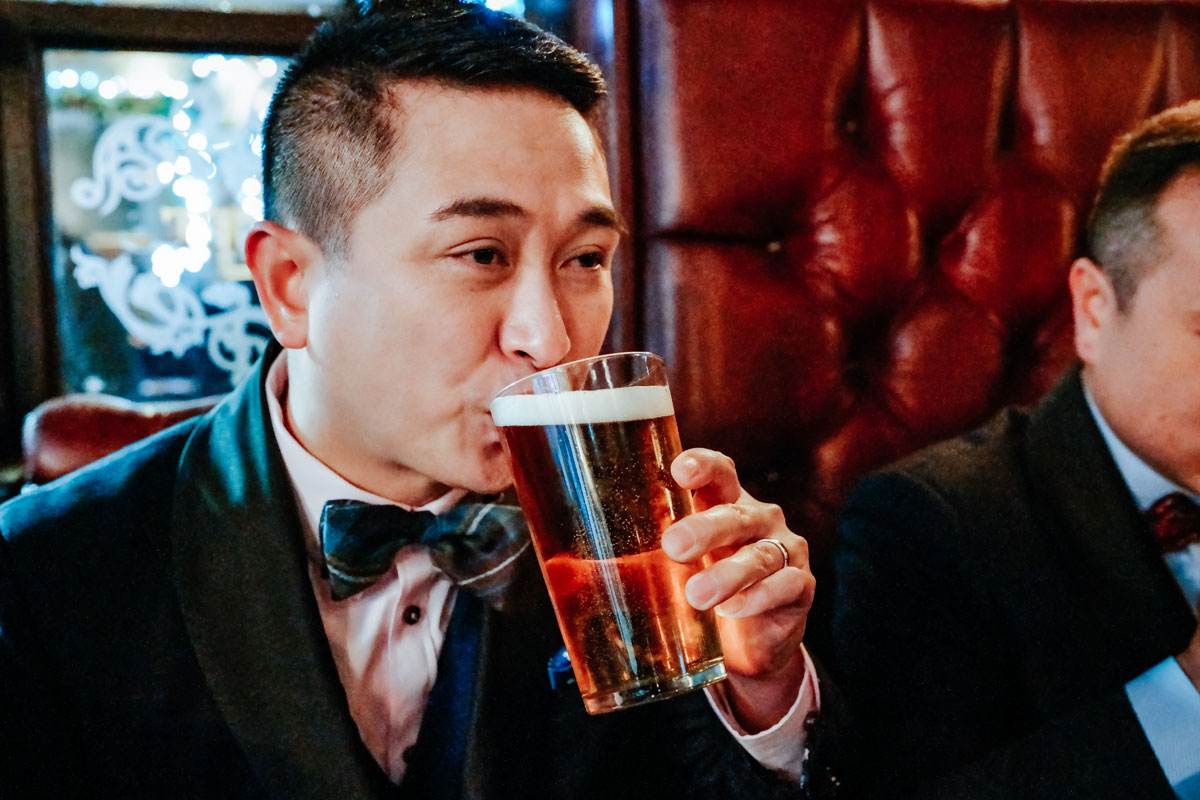 Making a meal of it: from grazing boards to BBQs, we run through popular serving options when it comes to your wedding food

In safe hands: photographers tell us how they’d make sure your big day snaps run smoothly